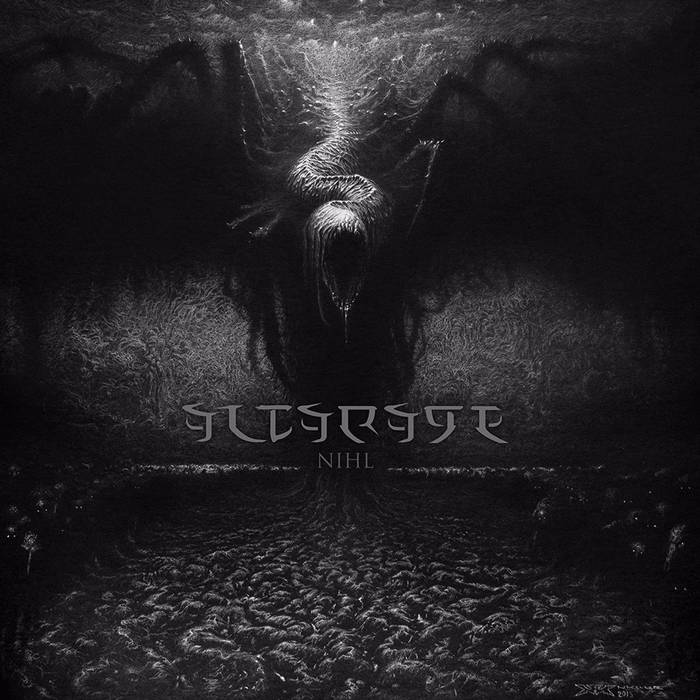 The Call of the Overlook

Altarage is a death metal band from Spain, not one from the standard camp either.  Once again, the genre of atmospheric, blackened death metal in the style of bands like Portal, Abyssal, and Vorage continues to grow and expand.  An army is being built, and Nihl is the latest set of enlistment papers.   And while an influx of new bands in a particular style can sometimes be yawn-inducing, nothing about Altarage should make you sleepy.

First and foremost, Altarage is a technical band.   The drums are a chaotic mix of shifting, Ulceratey blastbeats and powerful, moody sections of gargantuan bass and snare hits.  These transitions are complemented well by contorting riffs of deep tremolo akin to Portal and Malthusian.  So deep, in fact, that using this as background music nearly reduces the dark melodies to a drone.  But a more focused listen will reveal a wealth of style and songwriting that is more than initially meets the eye.

Verily, there are some great choices across Nihl that elevate dynamics above what the novice could produce simply aping the genre.   Rather than simply berate you with the already impressive technical feats of speed and time signature navigation, Altarage will at just the right moment...the one you think you know where a track is slithering to...change gears into a delightful bit of the aforementioned pounding drums.  But no matter what was happening, the album is one that left me in a Jack Torrence-faced state of dark euphoria.

And so what floored me about last year's Adversial album seems to have history repeating itself in 2016.  A virtually unknown band, assisted by the excellent Iron Bonehead label, emerges from the shadows to give us a truly twisted bit of death metal from perhaps its most promising subgenre.  It's addictive in every sense of the word, superbly played by an all-around talented group, and manages to find its own way despite clear inspirations from their peers   Nihl releases tomorrow and will be available for full streaming below, but it should only take a track or two to convince you to hit that "buy now" button.

Standout tracks: Graehence, Vortex Pyramid, Altars, Cultus, all of them