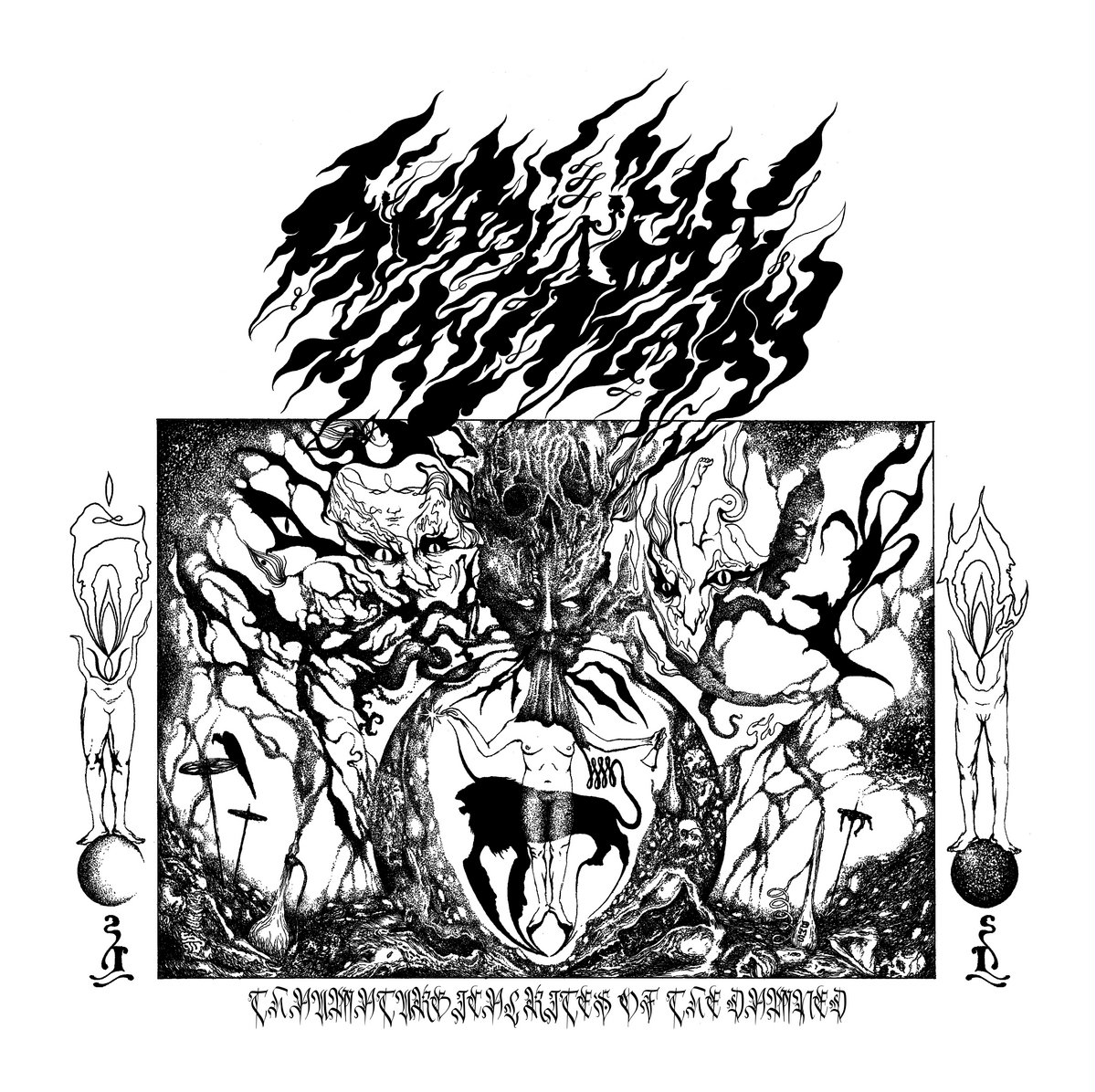 Thaumaturgical Rites of the Damned

Thaumaturgical Rites of the Damned
by Deadlight Sanctuary

It’s always interesting to follow solo projects from established metal musicians and see how they differ from their main groups, as some head in radically different directions while others are hard to tell apart.  One of the latest examples of this is Norway’s Deadlight Sanctuary, formed by G. of Goatkraft.  While the latter went for fast paced black/death metal that had nods to Blasphemy, Black Witchery, and Archgoat, G.’s solo work has chosen to explore a different branch of these genres and gone for a slower, methodical pace that gives off a more ominous and ritualistic vibe.  Though debut full length Thaumaturgical Rites of the Damned wears some of its influences on its sleeve, the tonality and thick, tense atmosphere are still likely to leave an impression on quite a few listeners.

Where Goatkraft sought to leave nothing but scorched earth behind with barbaric riffing and nonstop speed, Deadlight Sanctuary immediately differentiates itself with slower tempos and dense riffing that has so much reverberation to each note that it feels like it’s going to drown you in its murkiness.  That’s not to say that G. doesn’t kick things up into faster blasting at key points, but the approach here is a bit more ritualistic and methodical as the songs build with precision and allow dark and mysterious atmosphere to permeate the heaviness.  The press material that came with Thaumaturgical Rites of the Damned makes note of Beherit and Demoncy being significant influences on the material and that’s evident throughout, as songs like “Trance of Doom” are drenched in that same type of haunting melodies and jagged riffing that move from slower tempos to much faster ones without warning.  But it isn’t just early black metal of this type that defines Deadlight Sanctuary’s attack, as the opening sections of “The Eye of the North” remind me quite a bit of Teitanblood in just how murky and dense the instrumentation is and the sheer heaviness.  Admittedly sometimes the overall approach feels a little too close to the aforementioned bands, and there does remain room for G. to further differentiate this project from its inspirations.  But even with the similarities, this material still has a lot to offer fans of this style and it captures the murkier, otherworldly atmosphere and scorching tonality perfectly.  It’s also worth mentioning that the two interludes “Psalm of the Fallen” and “Abyssmal Void” stand on their own alongside the rest of the tracks rather than feeling like afterthoughts, adding to the mystique with melodies that conjure up visions of unknown rituals.

The vocals are another area where comparisons to Demoncy are likely to come up, as G. has a raspier scream that’s drenched in reverb and hovers over the recording with a demonic and ghastly presence.  By itself this style would have grabbed me in, but G. has also layered the screams together with much lower growls which makes the vocal work on the album sound immense as it twists and turns alongside the instrumentals.  Where a lot of black metal focuses on screams or growls that go right for the throat and are at maximum volume and intensity the whole way through, Deadlight Sanctuary opts for a slightly more nuanced approach where the vocals move from haunted whispers into much harsher ranges.  Despite the brevity of this twenty-five-minute album, chances are G.’s screams and growls will leave a lasting impression on listeners and it’s an area where this project stands out.

Deadlight Sanctuary conjures up murky and tense black metal on their debut full length, opting for slower, methodical pacing that builds up to faster and scorching riffing.  Rather than going full blitzkrieg on listeners like Goatkraft, G. has instead chained them up and allowed them to be torn apart slowly, and while this debut doesn’t always fully stand apart from its main influences it does them justice.  There’s a clear vision showcased on this album, and with this solid of a base in place it seems likely in the years to come that Deadlight Sanctuary will be able to find its own nuances and truly set itself apart.  Thaumaturgical Rites of the Damned is available from Sentient Ruin Laboratories and Iron Bonehead Productions.