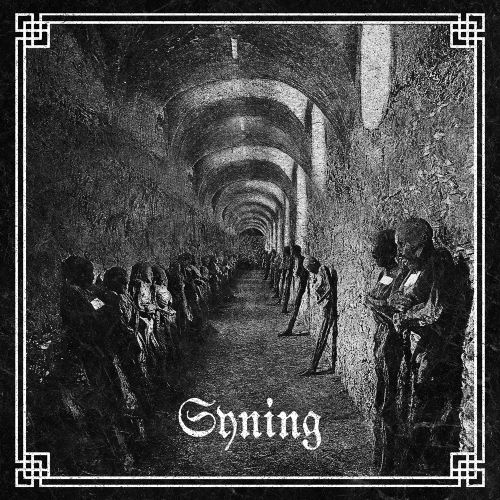 Terratur Possessions started off 2021 strong with the sophomore effort from Misotheist, and now their latest batch continues the trend.  The first of the two albums that I’m looking at is the debut from Syning, a new band formed by members of Manii, Whoredom Rife, and Knokkelklang, so you know you’re in for something that’s capable of emanating utter darkness and dread.  While there are some elements of those groups on this self-titled debut, Syning lets things flow outwards at a much slower and methodical pace that brings some hints of doom and ambient alongside the tense black metal tonality.  It’s not clear how long this project has been brewing for, but this debut already presents a fully realized sound that stands apart from the crowd.

There are some instantly recognizable elements to Syning’s music, but they’ve been woven together into ways that bring a new identity.  The stretched out guitar work that creates haunting melodies with an abrasive edge recall the foundations of second-wave black metal while the creepy ambiance generated by the synths works in a similar way as Manii’s previous album, but here everything has been slowed down to a methodical cadence that creates atmosphere so thick it threatens to suffocate you.  In simplistic terms, this feels like a merging of the type of tense and ritualistic black metal of a band like Mare with funeral doom’s glacial and methodical pacing, and the two main songs that make up the album demonstrate why this works so well.  “Atter igjen kommer mørket krypende” is where the more traditional black metal elements come into play, as you’re greeted with sparse ambient melodies that give off a bit of Urfaust vibes, but once the song starts to fully build the tempos move between funeral marches and the occasional blast.  With the first two tracks both running between thirteen to fourteen minutes this could have become extremely boring in the wrong hands, but Syning knows how to keep the tension at its maximum level with sudden injections of room-filling synths or drum fills.  Although the entire release is consistent, “Et siste skrik” is the clear highlight for me as the way that the riffs bend and twist during the first half brings a bit of a bluesy feel to the haunting and dark black metal proceedings.  “Fortapt” ends the album on an almost purely dark ambient note that keeps things minimalistic but generates that same tension through its blackness, as though its drawing you towards the afterlife.

Given the slow nature in which the instrumentals sprawl outwards, it makes sense that the vocals don’t make an immediate appearance and instead wait for just the right moment to strike.  Once they do break through the nightmarish and twisted instrumentation though the intensity is ramped up a notch, as the vocals come through as short bursts of higher screams that feel like a dagger aimed directly at your throat.  Where much of Syning’s sense of tension and dread is through its melodies and overall tone, the screams add a considerable amount of bite and stretch out into mournful howls during some of the peaks.  Sometimes groups of this type try to do too much with their vocals and the business clashes with the sparser approach of the rest of the band, but the performance here emphasizes space so that each verse comes through just as sharp as the last.

Syning thrives on slow-building and desolate atmosphere that feels like it’s letting you peer into the blackest of hearts and letting you experience that dread and despair.  This approach may not be for everyone, but the funeral doom like cadence and bluesy edge with how the riffs ebb and flow gives them a sound that’s already pushing outside of the norm early on.  Let yourself get swept away in the waves of haunting synth and jagged riffs and I think you’ll find this to be an album that draws you back regularly.  We’re not even into the second half of the year yet and Terratur Possessions already has claimed some of the best of 2021 spots, so I can’t wait to see what else is in store.