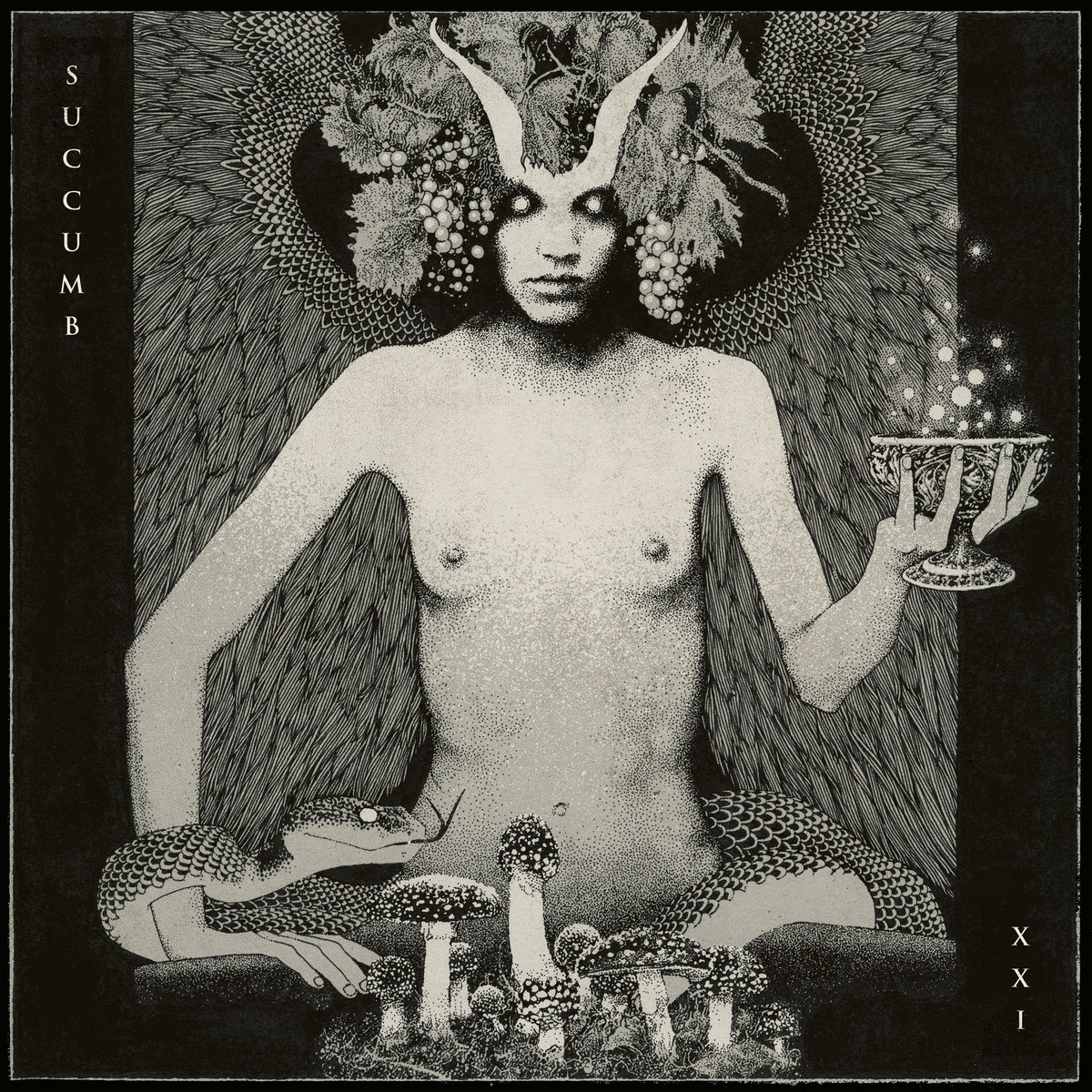 Originally formed as Cloak back in 2014, San Francisco’s Succumb burst onto the scene with their 2017 self-titled debut already showcasing a blend of black and death metal with the injection of a few other variants of heavy music that helped them escape some of the stagnation of both genres.  Four years later they’ve returned with follow-up XXI, which refines the approach of its predecessor into a more immediate and vocal driven album.  The unrelenting nature of the attack may still make some of the songs run together but Succumb is still fusing together elements of metal’s more abrasive side in ways that avoid the usual tropes.

Let’s discuss the vocals first, as they’ve been something of a point of contention for some listeners.  I credit this to the fact that a lot of black and death metal fans tend to be traditionalists when it comes to the usual growls and shrieks, so Cheri Musrasrik’s biting scream/snarl that wouldn’t sound out of place on a hardcore or powerviolence album seem to strike a nerve with some.  That’s certainly not an issue with me, as while I could certainly hear the screamed/yelled approach to fit just as easily over a bluesy Eyehategod groove or hardcore breakdown, it suits the frantic and ever-shifting instrumentation here that’s more black and death in its tonality.  Compared to the self-titled Musrasrik’s placed front and center rather than being buried underneath the instrumentation, and there’s sometimes so much distortion on her vocals that it brings Jacob Bannon of Converge to mind.  There are a lot of subtle shifts in pitch that make the performance far more interesting than having a one-dimensional growl from beginning to end, and it helps Succumb to stand out a bit more.

On the songwriting front there’s a lot to unpack throughout XXI, as the band tends to go for faster blasts a bit more often on this effort.  Songs come in fast and furious with drumming that wouldn’t sound out of place on a grindcore or war metal album, while the guitar and bass showcase equal amounts of old-school death metal and black metal dissonance.  This foundation is bolstered by regular tempo and time signature changes that bring a bit of mathcore’s frantic nature to mind, though it’s important to note that Succumb never go fully into “core” territory, instead retaining death metal’s DNA no matter where they’re going.  The couple of tracks that run past the five-minute mark allow for some slower breaks and darker atmosphere to seep in, but for the most part XXI remains a blitzkrieg of violent, jagged riffs that seem to dance over the unrelenting drums.  Songs like “Smoke” leave an impression with sweeps that have a bit of a Revenge vibe giving way to dense black metal riffing, and the way that this band takes the pillars of both black and death without falling into the usual trappings of either one makes a difference.  Admittedly while there are riffs that will grab you on that first listen and the shorter album length keeps things from falling into repetition, the emphasis on blasting and constantly shifting instrumentation does make some of the material blend together.  For me, I think that’s where Succumb still has room to grow, as they’ve refined and weaponized their combination of styles and showcased quite a bit of technical ability to do it but finding an even better balance between the immediacy and staying power will go a long way.

Succumb’s sophomore album builds naturally upon the elements the band established on their debut, opting for more blasting and warlike precision that still has quite a few twists and turns.  There’s an almost equal amount of black and death metal at work here with a little grind and the precision of mathcore adding some hellish window dressing, yet the way these songs come together don’t feel stereotypical of what black/death usually implies.  It’s an album worth diving into, and while some of the moments do blend together, there’s no denying the jagged edges and speaker destroying cracks of the vocals will prove to be appealing.  XXI is available from The Flenser.