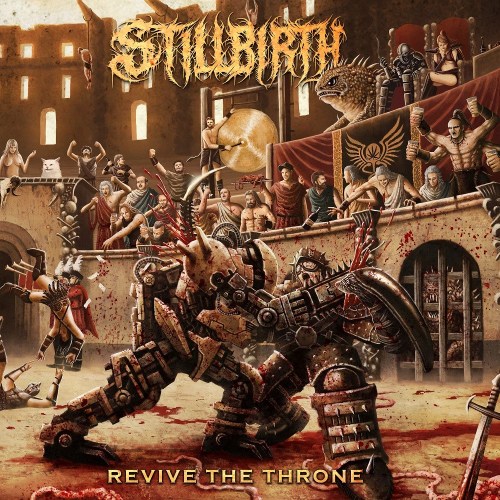 STILLBIRTH Give Into Their Bloodlust on REVIVE THE THRONE

Revive The Throne
by Stillbirth

What I Like: In keeping with the gladitorial imagery of the album cover, one that reminds me of another excellent brutal death release of the last few years in Gutslit, Revive The Throne opens with the sounds of a roaring arena crowd ready to cheer on the violence. And in this, Stillbirth do not dissapoint with their relentless onslaught of blasts, brees, slams, and squeels. Revive The Throne is a truly vicious display of modern day brutality; one that rivals even legends in the genre like Dying Fetus and Cryptopsy in its caveman brain antics. The production does a great job of highlighting the bludgeoning snare strikes and piercing pinch harmonics that punctuate every pummeling riff. And what really sold me on this band is the vocal variety. Whereas many brutal death and slam bands often bore me to tears with fairly monotonous gurgles, Stillbirth keep things interesting with a shifting palette of brees, Corpsegrinder-esque growls, and my personal favorite, throat-tearing high pitched screeches. Their sparing and calculated use of the latter really makes those moments pop within the album's focused runtime. The Wilhelm Scream sample "Panem et Circenses" is a nice touch as well.

Critiques: As well done and tightly honed this album is, it still feels like a fairly typical representation of the genre without much to make it stand out. Whenever I catch a band with these kind of chops, my feedback is always to find that extra "it" factor that really makes the argument as to why we should give a damn.

The Verdict: While Stillbirth could certainly still benefit from finding that "it factor" that helps them better stand out from the pack, Revive The Throne still represents one of the strongest outings in the genre that I've heard this year. Not only is it more than sufficiently heavy and brutal, it offers enough vocal versatility to make the experience consistently engaging.

Flight's Fav's: Revive the Throne, Revolt of the Weak, Dethrone the King