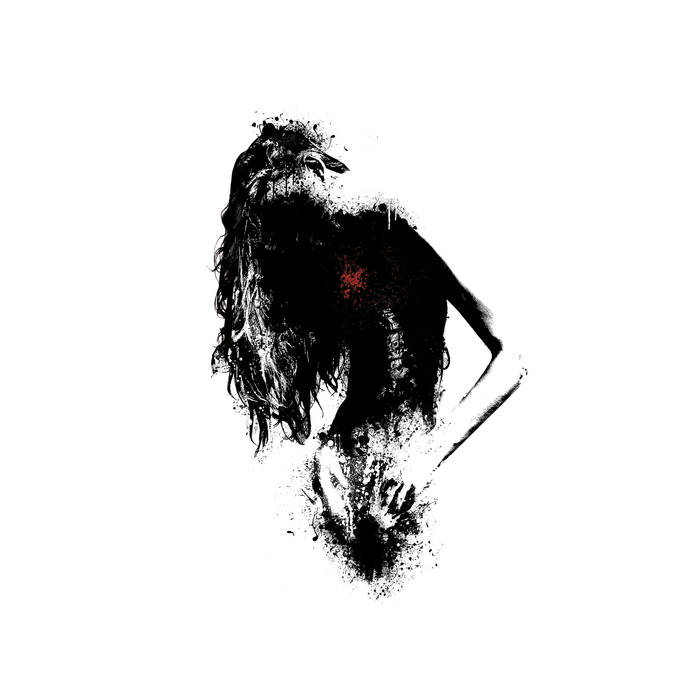 There are plenty of albums I have covered that were amazing despite having lousy album art.  But it never hurts to put forth that extra effort.  I'm not ashamed to say that I very much did judge this book by its cover.  Something about this image was so enticing.  I suppose it reminded me a bit of past Converge albums stylistically: sharp contrast, fragmenting edges, ominous overtones to an otherwise lovely female subject.  It's actually a James Sheridan.  Check him out.  But I'm rambling again.  Let's talk Ilenkus, the hardcore quintet from Ireland.  These guys have put out a few releases, with 2014's The Crossing garnering some positive attention.  But this four song EP...it's something else entirely, and I found it to be the perfect gateway for a newcomer like me.

Hunger is a truly sickening display of aggressive math bludgeoning.  Bands like Ilenkus are the reason I don't feel all that sad about losing Dillinger Escape Plan.  They've got the spirit, they've got the technical chops, and they've got the songwriting skills.  And all of this is proven in just 4 songs clocking about 15 minutes.  No time wasted, no bulls#!t.  Nothing but solid, dark mathcore rivaling both old standbys like Botch and newcomers like Torrential Downpour.

"Hunny Bunny" is no sweetheart.  This is more in line with the character from Pulp Fiction: loud, vicious, and uncompramising.  "Any one of you pricks move, and I'll execute every Motherf#!king last one of you!"  Except you will move.  I was having all sorts of crazy neck spasms to these riffs.  The insane intro of cascading snare hits and rumbling bass tone will knock your a$$ over.   Then the crazy spiraling chaos of guitars sets in along with the deafening, syncopated vocals. This and "The Romatic" are your more typical mathcore tracks and the most outwardly bruising.

"Pretty Secret" and "Exhume" are no less heavy, but take a sludgier approach.  Drawn-out chord progressions utilize repetetition and escalating volume to create the sonic equivalent of a fuse burning up to the dynamite.  The latter track definitely feels influenced by some of the more playful DEP tracks right down to the vocal inflection.  The simplicity of these middle tracks also does a nice job of setting up the frenetic conclusion; making every abrasive, staccato chord strike all the more jarring.  Hunger is a fantastic little EP, among the best of the year.  If you dig super-heavy hardcore and mathcore, there is no reason you should miss out on this little gem.