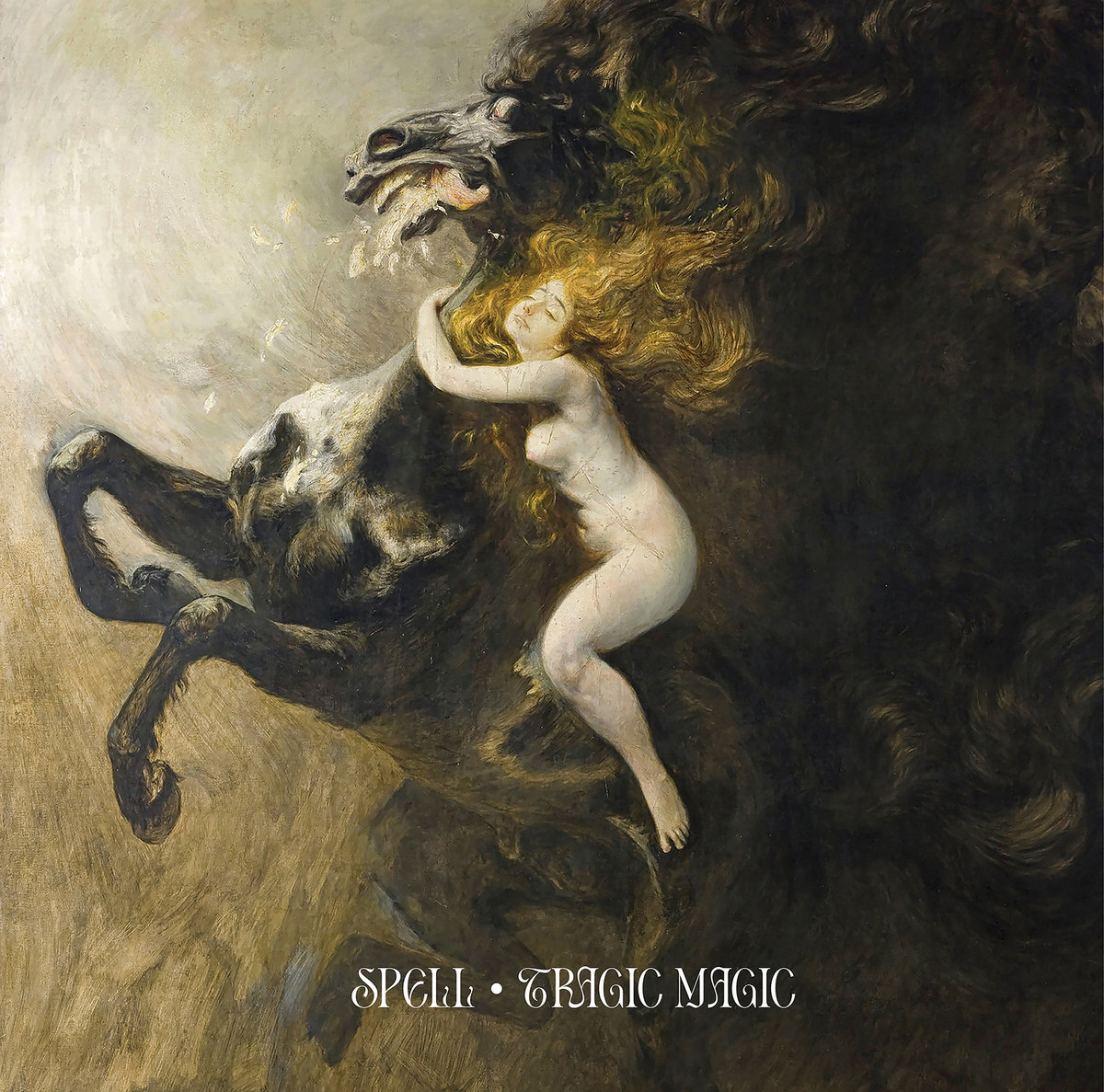 Vancouver based Spell blew me away with their third full-length Opulent Decay in 2020, taking their hard rock and heavy metal roots and expanding outwards to incorporate psychedelic and progressive elements.  It felt like a love letter to everything 70s and 80s while still having a noticeably current and fresh sound, and the variety and hooks left a lasting impression.  The band has been through some changes since then with guitarist Graham McGee departing last year, leaving the duo of Cam Mesmer and Al Lester to continue onward and this reduced lineup brings some noticeable streamlining on their fourth album Tragic Magic.  They still shapeshift regularly through everything from hard rock, gothic rock, heavy metal, and everything in between, but the songs are a bit shorter and accessible compared to Opulent Decay.  For some bands simplification or streamlining would be a negative, but Spell pulls it off here with their usual high standard of songwriting and have once again showcased why they’re one of the more exciting heavy metal bands out there.

There’s an immediate drive and sense of urgency right out of the gate, as opening song “Fatal Breath” launches right into a faster tempo, brooding bass work, and guitar melodies that seem to dance over top of this foundation.  It immediately brings a bit more of a goth vibe into the mix alongside the heavy metal and hard rock listeners would expect from Spell, and while there was some of that influence present on Opulent Decay it feels much more pronounced on Tragic Magic.  It’s evident that the duo has focused on songs that are a bit more streamlined and offer up specific hooks that are a bit more accessible than they were in the past, but this doesn’t mean that they’ve lost their sense of adventure.  Tragic Magic still provides plenty of room for soaring solos and unexpected transitions that pull in a psychedelic haze or a little prog for good measure, but the shorter track lengths mean that they don’t sprawl outwards quite as much.  I do miss some of that aspect of Opulent Decay, but there’s no denying that the restraint has resulted in an album that has just as many moments that are memorable from beginning to end.  Spell keeps a mysterious and darker vibe throughout Tragic Magic, but how they get there deviates significantly from one song to the next.  Some tracks emphasis the synthesizer and guitar melodies and feel much closer to 70s hard rock, while others mix full-on goth and heavy metal.  Once again there’s just something about the second half that stands out slightly more than the first, but the gap isn’t that wide and this remains material that is easy to enjoy in its entirety.  But the run of songs from “Sarcophagus” to “Souls in Chains” is stunning, offering everything from brooding and beautiful sounding instrumentation to very proggy guitar on “A Ruined Garden”.  The only thing I’m not crazy about is the placement of “The Watching”, which feels like it would’ve worked better as an interlude rather than an outro and does dampen the impact ever so slightly.

Vocals are split between the duo again, but there’s even more variety to the performance on Tragic Magic.  Early on you’re met with the softer and mysterious singing that was what stuck out to me the most on Opulent Decay, which continues to give Spell a different vibe than some of their other heavy metal peers.  “Ultraviolet” showcases some eerier, echoed spoken word in between soaring melodic singing, while “Fever Dream” goes for harmonized choruses that sound somewhere in between glam and goth.  Things completely change on “Sarcophagus” though, as vocal duties shift and you get a much gruffer pitch that gives off more of a muscular hard rock tone, and this is expanded upon further on “Souls in Chains” which goes for full-on goth crooning that reminds me a bit of the path Unto Others was exploring on their latest release.  Some of these elements were present before but they’ve been expanded upon significantly and are used in much more unpredictable ways, which works to the duo’s advantage.

Tragic Magic may come in just below Opulent Decay score wise as I do miss some of the prog leaning exploration, but both are top notch efforts that are highlights of their respective years.  This streamlined yet still adventurous approach makes sense for the duo and acts as a natural follow-up, giving listeners plenty of strong hooks and varied styles that celebrate the mystique and darkness within hard rock and heavy metal.  It’s exciting to see Spell remaining on an upward trajectory, and I’ll be waiting to see where to go next.  Tragic Magic is available from Bad Omen Records.