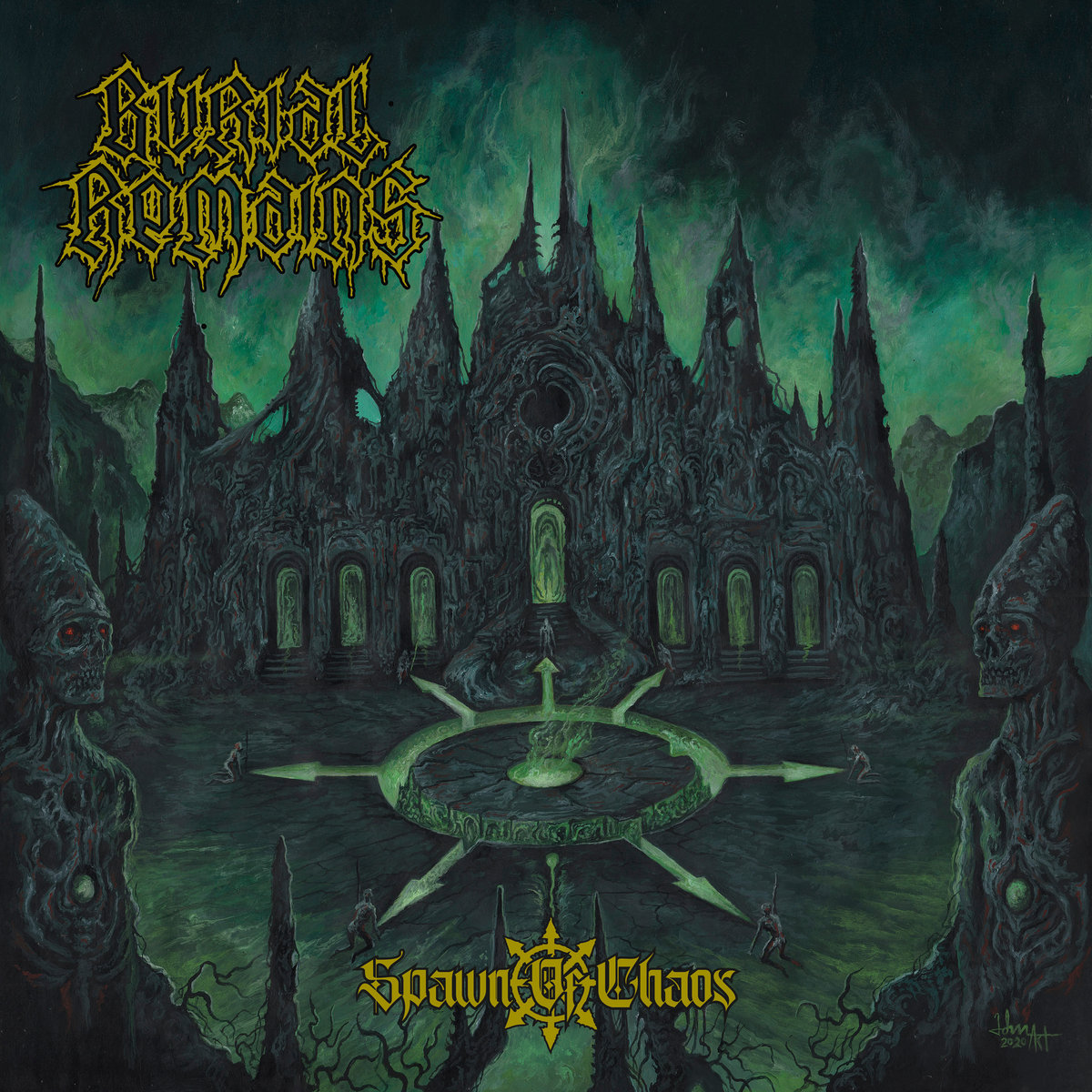 Spawn of Chaos
by Burial Remains

Burial Remains is a newer death metal band out of the Netherlands made up of seasoned veterans that have been a part of Dimæon, Grim Fate, and Boal.  Their debut full length Trinity of Deception showcased that familiar HM-2 buzz saw tonality that pulled from early Swedish death metal alongside fellow Dutchmen like Asphyx.  A little over a year later the group has not only gone through some lineup changes but put together their second album Spawn of Chaos.  Vocalist Sven has left, leaving guitarist Wim to step up to the plate, and the band has also been joined by a new bassist.  With these changes in place, Burial Remains has continued to bludgeon listeners with material that worships that almighty tone.

There’s no time wasted in making sure listeners know exactly what they’re getting with Spawn of Chaos, as opener “As Darkness Shall Reign” immediately launches into buzz saw tonality and riffs that seek to crush everything in their path.  As you make your way through each of the nine songs you’ll find that Burial Remains has a tendency to alternate between tracks that go for straightforward brute force assaults and slower, ominous ones that add quite a bit of melody into the mix and build up some thicker layers.  Classic groups like Grave, Entombed, and Asphyx come to mind throughout the material, and while these guys won’t win any awards for originality, they capture the sheer power and zombielike lurch that has made this type of death metal appealing for three decades.  Admittedly when stacked up against Trinity of Deception this follow-up doesn’t feel like quite as much of a leap forward as it could’ve been, as while there’s a sense of consistency to the riffs and the intensity remains consistent the riffs do tend to blur together and there aren’t always individual moments that truly wow you.  Burial Remains do hit that sweet spot on “Spear of Destiny” and “Slaves to the Cult”, with the former letting some truly haunting melody seep in and the latter slowing things down to an almost death/doom lurch, which did draw me back to Spawn of Chaos.  But a few more truly standout riffs would help to push this band to the next level and put them above some of the others going for this same sound.

With guitarist Wim taking over the vocal position from Sven, there are some noticeable differences on Spawn of Chaos compared to its predecessor.  Wim’s growling isn’t quite as deep, but he still hits some distorted pitches that sound downright inhuman and is able to maintain a consistent level of power and grit throughout the entire album.  There are a few moments where higher pitched backing screams can be heard, but for the most part the growling dominates Burial Remains’ material.  It can be difficult when a band goes through vocalist changes this early into their career, but the performance here suits what the material is going for and it’s clear with Wim behind the mic there’s nothing to worry about.

Given the quick turnaround between releases, it feels like Burial Remains wanted to showcase their new lineup and what they’re capable of.  It’s on par with last year’s release and has the type of heavy hitting and crunchier death metal that old-school fans everywhere will dig, but still doesn’t quite reach a truly standout level.  The potential is there though, and if this lineup continues to progress and refine their songwriting, I think this will be a name you’ll be seeing mentioned a lot more when it comes to Dutch death metal in the coming years.  Spawn of Chaos is available from Raw Skull Recordz.