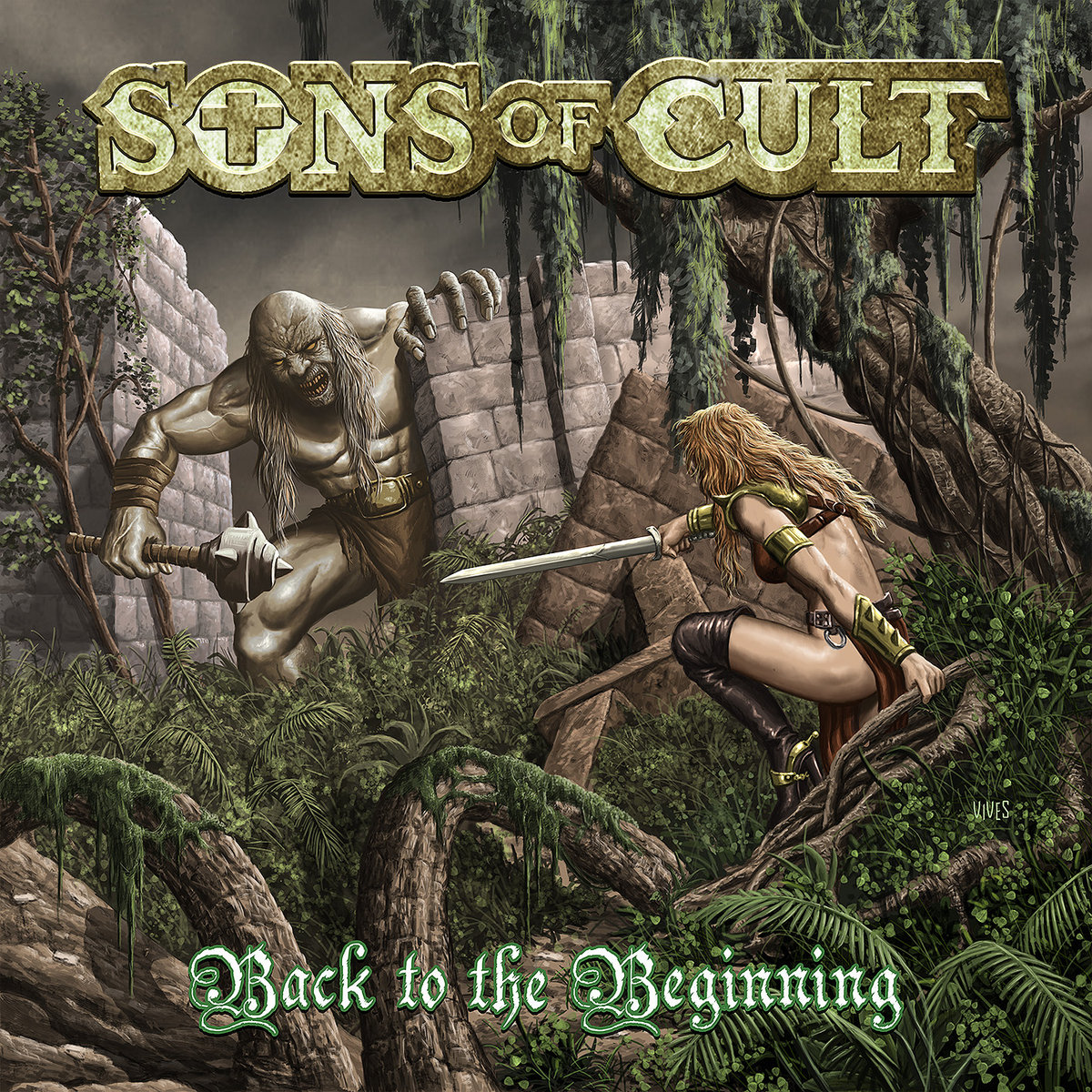 Sons of Cult- Back to the Beginning (Album Review)

Back to the Beginning
by Sons of Cult

Spain hard rock/heavy metal band Sons of Cult was formed in 2020 by Unbounded Terrror/Golgotha guitarist Vicente Payá with the intention of paying tribute to the genre classics of the 80s and beyond.  The group has kicked off 2023 with the release of their debut full-length Back to the Beginning, which favors a bit more hard rock and even AOR sounding material with a good dose of heavy metal in between.  It may need a bit more variation in tempo, as the emphasis on slower and methodical rock does result in some similar sounding moments, but this is still a strong first showing from this new act.

Right from the opening of “Fighters” it’s clear that Sons of Cult has a love of everything 80s and has woven this into their songwriting.  The track begins with crunchier dual guitar work that feels somewhere between Saxon and Iron Maiden with a little Scorpions thrown in for good measure, and this transition between heavier and melodic riffing continues for most of the album.  Sons of Cult doesn’t go for pure NWOBHM worship or 70s/80s hard rock, finding a direction comfortably in the middle that helps them stand out a bit more compared to some of the others out there that tread extremely closely to one band.  Songs like “But Not Me” move from heavy metal verses into AOR melodies on the choruses that feel much airier and light in tone, while “Evil Trail” goes full on NWOHBM initially with a bit more speed.  You also get a well-done cover of Michael Schenker Group’s “Desert Song” from their Assault Attack album, which should give you a good idea of where the sound skews on Back to the Beginning.  But while there are some standout moments and plenty of strong solos, the emphasis on slower tempos makes several of the tracks run together over repeat listens and does dull the impact.  There’s nothing outright bad, but a few more shots of adrenaline like “Evil Trail” would’ve helped to break things up more.  Sons of Cult is helped by some strong production values though, which allows the heavier moments to have some weight and the lighter choruses to soar.

One of the elements that is likely to differentiate Sons of Cult from so much of the other heavy metal/hard rock out there is singer Jaume Vilanova.  Rather than going for the gruffer tones or falsetto heavy performances that dominate the genre, he has a more laid back and booming voice that reminds me of earlier solo era Ozzy Osbourne combined with Burton Bell’s softer moments.  That’s a combination that I can’t say I’ve heard before and it gives a unique flair to Back to the Beginning, as the harmonized choruses have this infectious quality that make the album more memorable.  It may prove to be an acquired taste for some, especially if you’re looking for more of the oomph and power from the heavy metal side, but those who enjoy just as much melodic rock/AOR will find that what Sons of Cult is doing is right up their alley.

I went into Sons of Cult’s debut expecting another album that pulls heavily from the NWOBHM script without doing much else, but was pleasantly surprise to find they were starting to establish something just a little different.  By going a bit more hard rock and even hitting the soaring melodies of AOR while still letting plenty of heavy metal seep in, they have a sound that’s slightly less derivative and the softer, infectious singing of Jaume Vilanova help that.  Their writing does fall into too similar territory and results in a few too many songs blurring together, but with time I think they’ll improve upon that and are a band to watch in the coming years.  Back to the Beginning is available on Fighter Records.