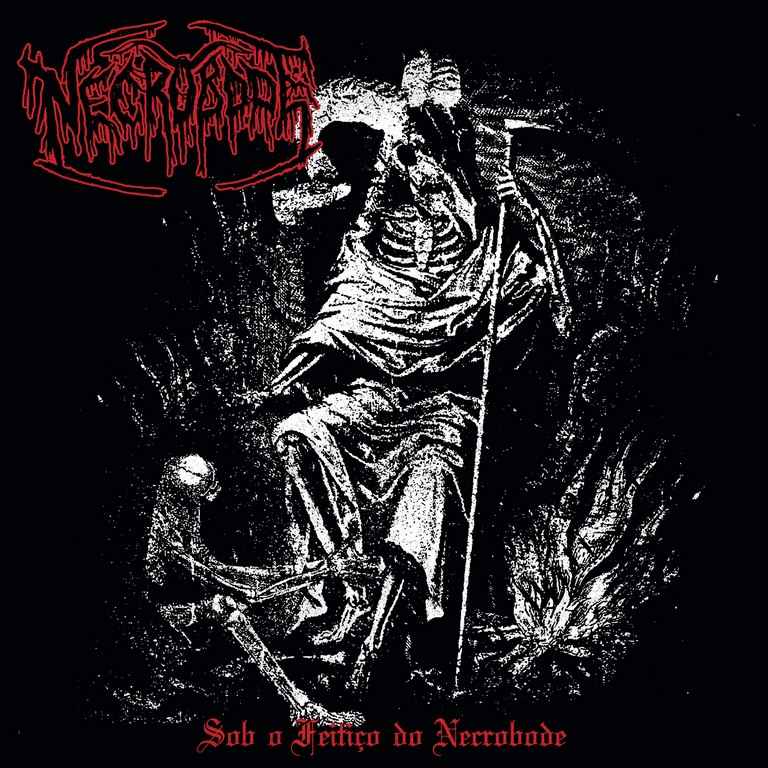 When it comes to Portugal I tend to think more of raw black metal courtesy of labels like Signal Rex, but the country has plenty of other metal that’s worth unearthing.  One of the more recent examples is Necrobode, a black/death metal band that released their debut demo back in 2018 and now have followed it up with the Sob o Feitiço do Necrobode full-length.  Channeling an evil and chaotic atmosphere alongside songs that pummel consistently from beginning to end, Necrobode’s attack is familiar but they vary it up more than you might expect.

The instrumental style pulls evenly from black and death metal, with the drums and bass filling out the low end and giving the recording an immense amount of weight.  It feels like the drums are capable of pounding through reinforced concrete with how immense they are, and they give the album the type of violent impact that makes this type of metal so appealing.  Like some of their peers Necrobode gives nods to Blasphemy and Demoncy (among others), but their riffs vary up the tempo a bit more often and there’s a good deal of groove and atmosphere mixed in with the blasting.  When the band slows things down for a moment and throws in some synths the sound is reminiscent of the occult and otherworldly feel of 90s Greek black metal which can be hard to pull off right, but it’s integrated right into the attack.  What works to the band’s advantage is they keep things brief, with the entire album coming in at a half hour and most songs barely cracking the four-minute mark.  This allows them to conjure up faster blasting and slower death metal grooves that stick with listeners but change things up before repetition sets in, and this makes a big difference.

With the instrumentals coming through as aggressive as possible, it makes sense that Necrobode’s vocals follow suit.  The band’s singer has a low-pitched growl that’s drenched in reverb and distorted to the point that it sounds inhuman at some of the most abrasive levels.  There’s a considerable amount of power behind each growl and the vocals have been given a little bit of separation from the rest of the mix so that they stand out rather than being drowned out by the guitar and drum work.  It’s a familiar style for black/death metal but when it’s delivered so convincingly and doesn’t waver in intensity for a single second it still manages to help the band stand out.

In recent years there’s been an influx of new groups trying to do the black/death metal style of the 80s and 90s, but not all of them have been able to provide substance behind the usual violence and bestial attacks.  Necrobode manages to succeed in both fronts with their debut full-length, delivering some pummeling grooves alongside chaotic blasting while switching up the formula up often enough to make the songs distinguishable from each other.  This is a strong showing and hopefully just the beginning from this promising band.  Sob o Feitiço do Necrobode is available from Iron Bonehead Productions.