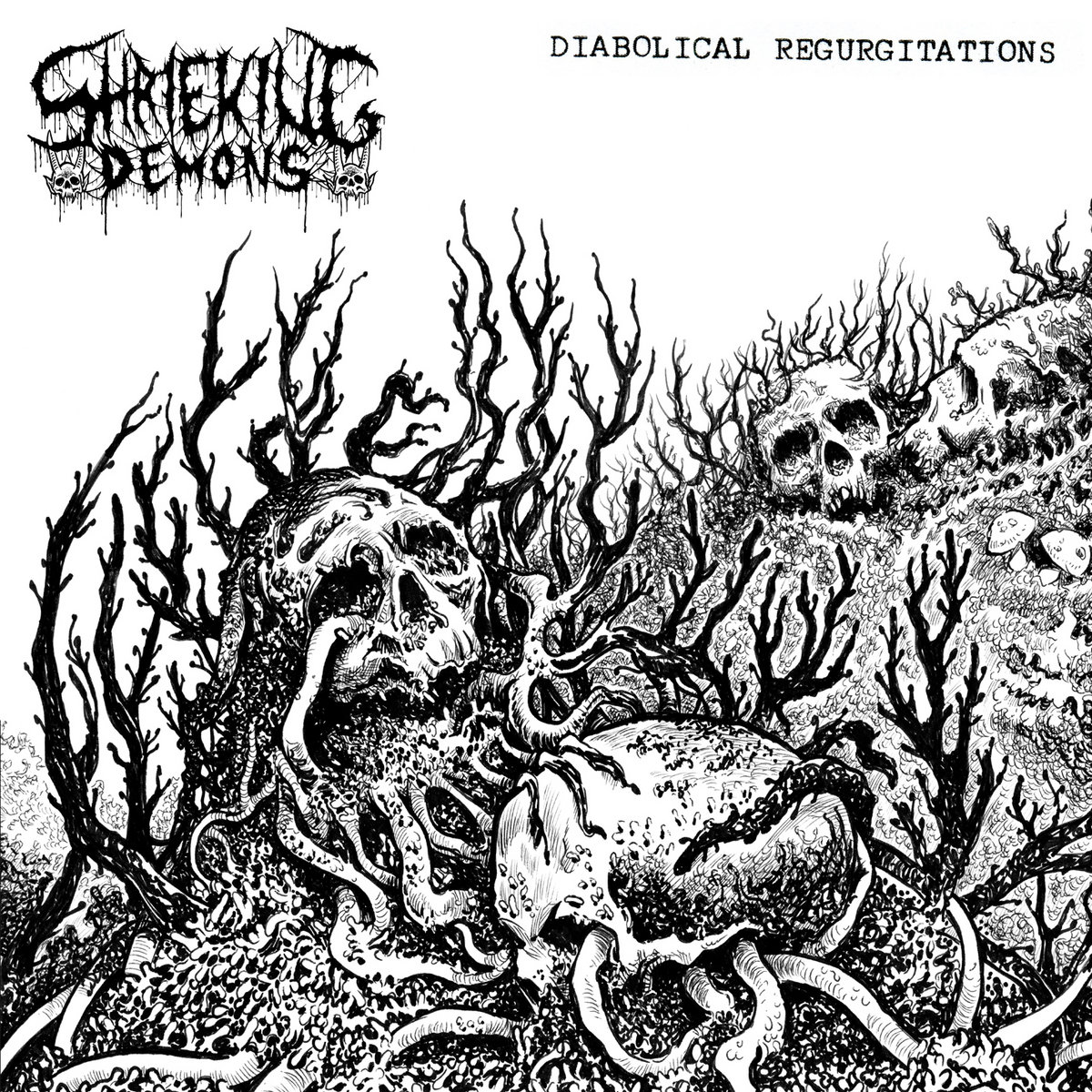 Italian death metal band Shrieking Demons was formed earlier this year by members of Becerus, Assumption, and Gravesite, so this trio is certainly made up of musicians who know a thing or two about the genre.  Where their other groups have explored different elements of death metal and death/doom, Shrieking Demons heads back towards the genre’s earlier days and a very American sound on their debut EP Diabolical Regurgitations.  Offering up chunkier tonality with riffs that prefer to lurch forward like a zombie before breaking into some D-beat, the four songs pull from familiar territory and while there’s room for the band to further establish their own identity fans of this sound will still appreciate what they have to offer.

What you’ll immediately notice upon hitting play is that Shrieking Demons pulls a significant amount of influence from both Autopsy and Abscess, incorporating the filthy, murky tonality of the former with some of the punk leanings of the latter.  The sound here is appropriately chunky and has a significant amount of bass filling out the low-end, often coming through in a similar way that isn’t too dissimilar from how a lot of death metal sounded in that critical early to mid-90s time period.  Comparisons to early Death can be made as well, but regardless of which bands you hear the most in what Diabolical Regurgitations there’s no denying that Shrieking Demons have studied the influential American bands in the genre.  What I like about the material here is how the instrumentals already seem to be shaking up the formula from one song to the next, as “Hidden Cathedral of Diseases” kicks up the tempo in favor of more punk and D-beat while “Whispering Corridors” embraces a slower, almost doom-like approach.  There are already some standout riffs to be found at this early stage, and the rawness of the recording adds to the appeal.  Admittedly Shrieking Demons does come in a bit too close to Autopsy at times and still have room to further develop their sound in ways that make themselves a bit more distinguishable, but that’s likely to come considering how recently these guys formed.

Vocalist Gabri is in a slew of other Italian death metal bands, so you may have heard his raspier screams and growls before.  He’s a good fit for what Shrieking Demons is going for stylistically, hitting that same rasp and grotesque ranges as Chris Reifert with a little Chuck Schuldiner thrown in for good measure.  Gabri’s voice echoes off the recording with a sinister and monstrous presence, and there’s that same intensity and fire behind each verse that is reminiscent of many classic death metal albums.  The back and forth between the high and low ranges helps to give a good amount of variety to the performance, and if Shrieking Demons can continue to utilize this on a longer release it would work to their advantage.

There are some strong riffs on this EP and the amount of variety on display is already better than a lot of newer death metal bands, showcasing how much experience this trio has from their other projects.  It may not quite reach the level of their inspirations and still has room for further growth, but I like what Shrieking Demons is doing here and fans of Autopsy and early Death are sure to get some mileage out of this one.  I’m interested to see where they go, as these guys already have the raw and filthy sound down, so here’s hoping another EP or a full-length debut will take things to the next level.  Diabolical Regurgitations is available from Caligari Records.