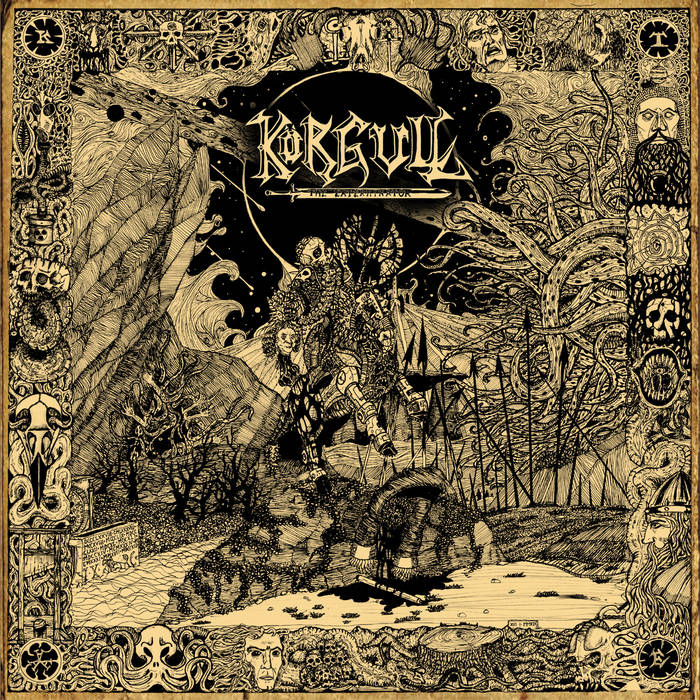 Sharpen Your Spikes
by Körgull the Exterminator

Named after a Voivod song, Spain’s Körgull the Exterminator has been going strong since 2004 with a blend of high energy and gritty black/thrash.  Albums like War of the Voivodes showcased a relentless and primitive approach to the genre that stripped things down to their basics yet still had a knack for catchy riffs, and for their fifth full length Sharpen Your Spikes that approach has continued.  This release comes nearly five years after the last one, with new guitarist Ghorth (Decapitated Christ) having joined the band in 2019.  It’s another absolute blast of all-out destruction and fire, and while Körgull the Exterminator has tweaked rather than reinvented their fifteen-year formula it remains just as appealing as ever.

After a short intro that feels like it’s sending you off into battle, the instrumentals come roaring in with scorching leads and blasting drums that keep things moving at a faster pace.  If you’ve never listened to this group before you might assume the Voivod influence would be heavy given the name, and while they do tap into some of that band’s earliest days but there’s a lot more black metal to be found throughout Sharpen Your Spikes.  The closest comparisons are classic acts like Nifelheim and Aura Noir, as songs like “Inquisitor Generalis” channel into the raging thrash leads while still having raw, abrasive black metal tonality.  During some of their fastest moments Körgull the Exterminator’s material seems like its on the verge of collapse, as the instrumentals all blur together into a whirlwind that give off some of the rabid nature of early Kreator.  With the addition of a second guitarist, this band has gotten even denser and the two work together in tandem to absolutely pummel you into oblivion.  Admittedly the writing still retains a more straightforward approach with high-flying riffs that move between mid-tempo and blisteringly fast tempos, but there’s still plenty of catchier leads that will have you banging your head.  As you might expect with eleven songs there are passages that blur together, and I’m not sure that some of the more traditional black metal sections justify their longer track lengths, but for every moment like this you have songs like “Sword and Sorcery” that will make you want to crank up the volume and hit the repeat button.

One of the most prominent elements of Körgull the Exterminator are the raspier vocals of Lilith Necrobitch.  Her screams tear through the recording with an immense amount of force and grit, bringing to mind the same type of raw intensity as Sabina Classen (Holy Moses).  It’s impressive that the performance remains so consistently abrasive and in your face from beginning to end, as even though the pitch stays at around the same general level it never feels overly repetitive or like Lilith is running out of steam.  Even when the instrumentals reach their most rabid and noisy levels the screams stand far above them, sending the rest of the band off to level everything in their path.

With album number five Körgull the Exterminator has retained their blend of black metal and thrash, channeling the late 80s in all its destructive glory.  The addition of a second guitarist has made them even more intense and noisier than before, but there’s still plenty of riffs that will hook listeners even as they get burnt to a crisp.  Like some of the band’s previous discography, this material feels a little on the long side and some moments blur together, but the high points outweigh this and make for a worthy listen.  Crank this one up loud, and you’ll have a damn good time.  Sharpen Your Spikes is available from Xtreem Music.