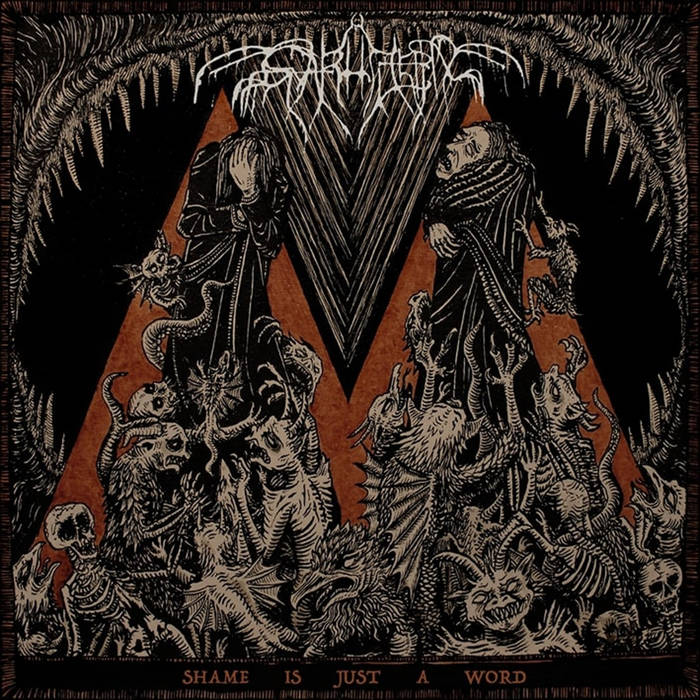 Shame Is Just A Word

Shame Is Just A Word
by Svarttjern

While they haven’t become as prominent as some of the longer running Norwegian black metal bands, Svarttjern’s been known for their consistency in the underground thanks to some blistering albums that channeled the all-out violence and chaos of the second-wave sound.  In recent years the group’s sound has continued to evolve, and for their fifth effort Shame Is Just A Word they have once again shaken things up.  With a sound that incorporates just as many thrash influences as traditional black metal ones, Svarttjern has boiled things down to their essentials and presented listeners with a raw and gritty effort that has plenty of appeal.

Black metal has seen a lot of bands moving towards lengthier, epic arrangements in recent years, particularly when it comes to the Scandinavian scenes, so it’s nice to find one that’s tried to recapture the gritty rock ‘n roll spirit and conciseness of some of the earlier days.  Shame Is Just A Word flies by at a brisk thirty-five minutes which gives Svarttjern plenty of time to hit listeners squarely in the jaw with some razor-sharp guitar leads and then move onto the next idea.  Where this album differs the most from their past discography is the increased emphasis on thrash, which is perhaps best showcased by the inclusion of a cover of Exodus’ “Bonded by Blood”.  It’s an approach that suits the more concise songwriting well, as you have your fair share of punchy black/thrash riffs that go for the jugular followed by some slower ones that channel the fire and grime of the second-wave.  Admittedly there are more standout moments on the second half of Shame Is Just A Word, as from “Frost Embalmed Abyss” onwards the instrumentals really grab you and don’t let you go until the end, but when these guys really lock in on this rawer sound they absolutely nail it.

HansFyrste’s raspier screaming has always been a key component of Svarttjern’s sound and that’s once again the case here, was his vocals stand slightly above the instrumentals and take the spotlight on many of the songs.  What I’ve always liked about his particular style is that it had a grimier feel which upped the sleaziness of the material quite a bit, and this suits the group’s overall aesthetic and lyrics perfectly.  Shame Is Just A Word lives up to that with songs like “Melodies of Lust” and “Ravish Me”, and you might just need a shower after you’ve finished listening to the album.  HansFyrste does stick with screaming for most of the record but occasionally he heads into some slightly cleaner territory which is reminiscent of Mortuus (Marduk) in its approach which does help to add some variation.

It does take a few tracks before the album truly sinks its teeth in, but once the riffs pick up you’ll want to listen until the end and come back for another punch to the gut.  Svarttjern has stripped away the excess and boiled their sound down to the raw core of black metal and black/thrash, which proves to be just as appealing in 2020 as it was a few decades ago.  At this point in their career it’s a move that makes sense and keeps them worthy of your attention amongst the other Norwegian bands vying for valuable listening time.  Shame Is Just A Word is available from Soulseller Records.