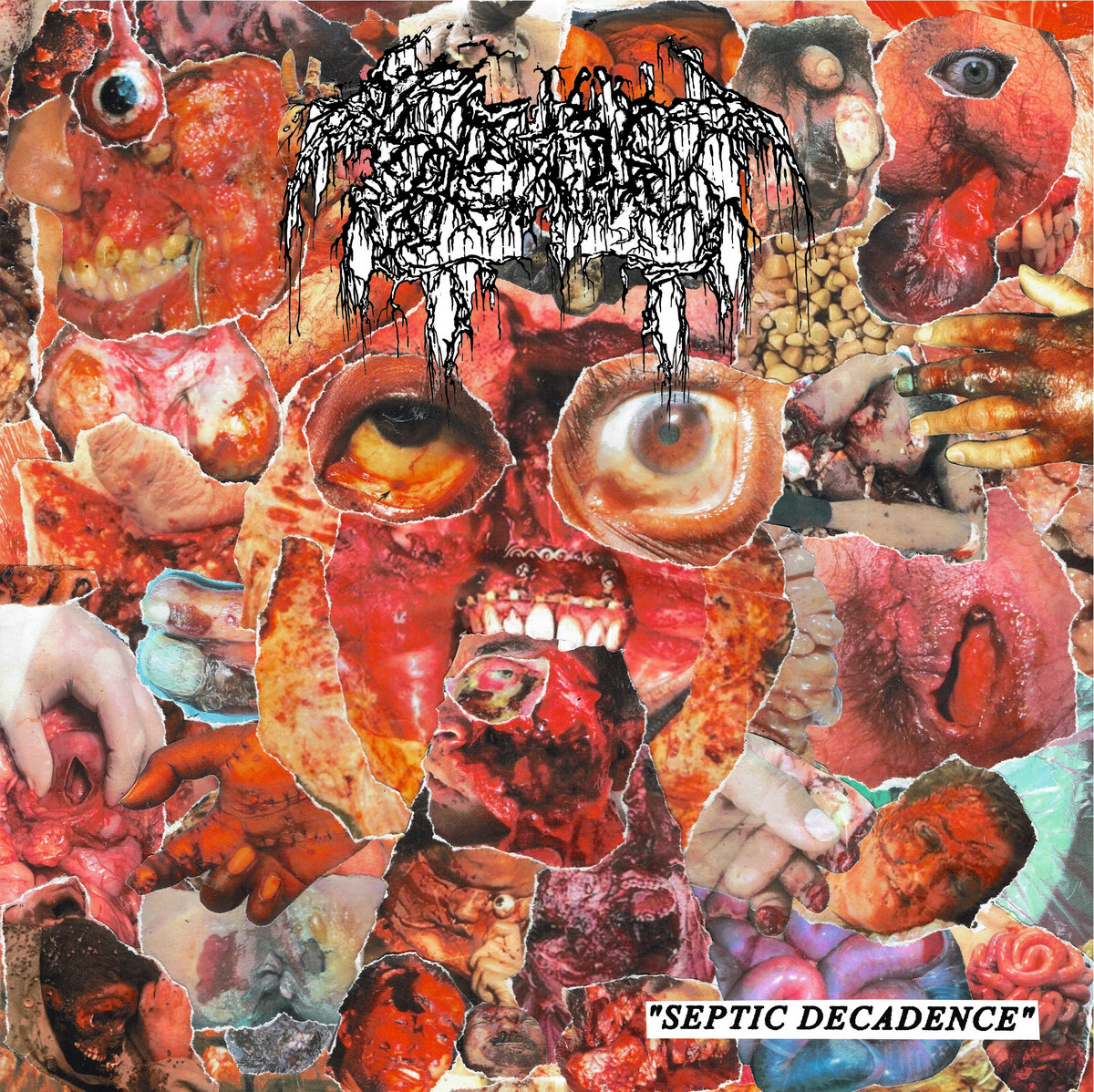 With album art that brings the likes of Carcass and Impaled to mind, Denmark’s Septage makes it immediately clear that they’re going for a blend of gnarly goregrind and early death metal on their debut EP Septic Decadence.  The trio certainly aren’t strangers to quality death metal, with two of the three members having been in bands like Taphos and Hyperdontia, but Septage pulls from a noticeably different set of influences.  It’s a quick listen at just under twelve minutes, but the band is able to cover a lot of ground in that period of time and delivers some surprisingly catchy moments amongst the downright filthy riffing.

“Mouthful of Untreated Sewage” wastes little time in attacking listeners with blasting drums and filthy, grime-soaked guitar and bass work that bring equal amounts of Symphonies of Sickness era Carcass and early Autopsy to mind.  While you might be expecting an almost pure grind or goregrind listen based on the cover art, Septage remains firmly rooted in the late 80s and early 90s where the genres bled into death metal and went on to form some of the more influential foundations.  Although they wear their influences on their sleeves, this trio does the sound justice with songs that seldom stay in the same place for too long and have an almost perfect balance of blasting and mid-tempo sections that give off a more ominous and creepy vibe.  Where a lot of modern death metal and grind have the tendency to come off as fairly one-dimensional and run out of ideas early on, Septic Decadence seamlessly moves between tempos and riffs in the span of a few minutes and manages to cram a number of riffs that stick with you upon repeat listens.  The one exception to this is the one-minute and eighteen second “Jeffrey Dahmer”, a cover of Turkish death metal band Deathroom from their 1993 demo Violate the New Born that is a bit more straightforward and goes for the throat with punchier riffs.  Compared to the heavyweights of the style Septage’s EP does sound a bit cleaner and it’s a little easier to make out the individual instruments than it was three decades ago, but there’s still plenty of filthiness coming through each note and that makes this material just as appealing.

The riffs are likely to keep you coming back, but the first element of Septage’s music that you’ll be focused on are the vocals.  From the very beginning they’re as over the top as you’d expect from anything goregrind influenced, coming through in all the pitch shifted and gurgled glory that instantly makes listeners pay attention.  This style alone would be more than enough to keep Septic Decadence interesting for its entirety, but the band switches things up with some more traditional sounding death metal growls and screams that keep things feeling diverse from one passage to the next.  It’s a small detail but it goes a long way in giving the material some additional longevity, and the group could easily use it to their advantage down the road.

Despite the fact that they’ve been around for less than a year, Septage has written pummeling and grotesque material that does the early days of death metal and goregrind justice.  The vocals are monstrous and the riffs keep things feeling versatile, making this trio one of the most exciting newcomers of 2020.  Symphonies of Sickness and Severed Survival never get old, and groups that can channel those albums and periods of death metal and grind are always a winner in my book.  Now get to writing a full length!  Septic Decadence is available from Me Saco Un Ojo Records, Steel & Bone Productions, Extremely Rotten Productions, and My Dark Desires Records.