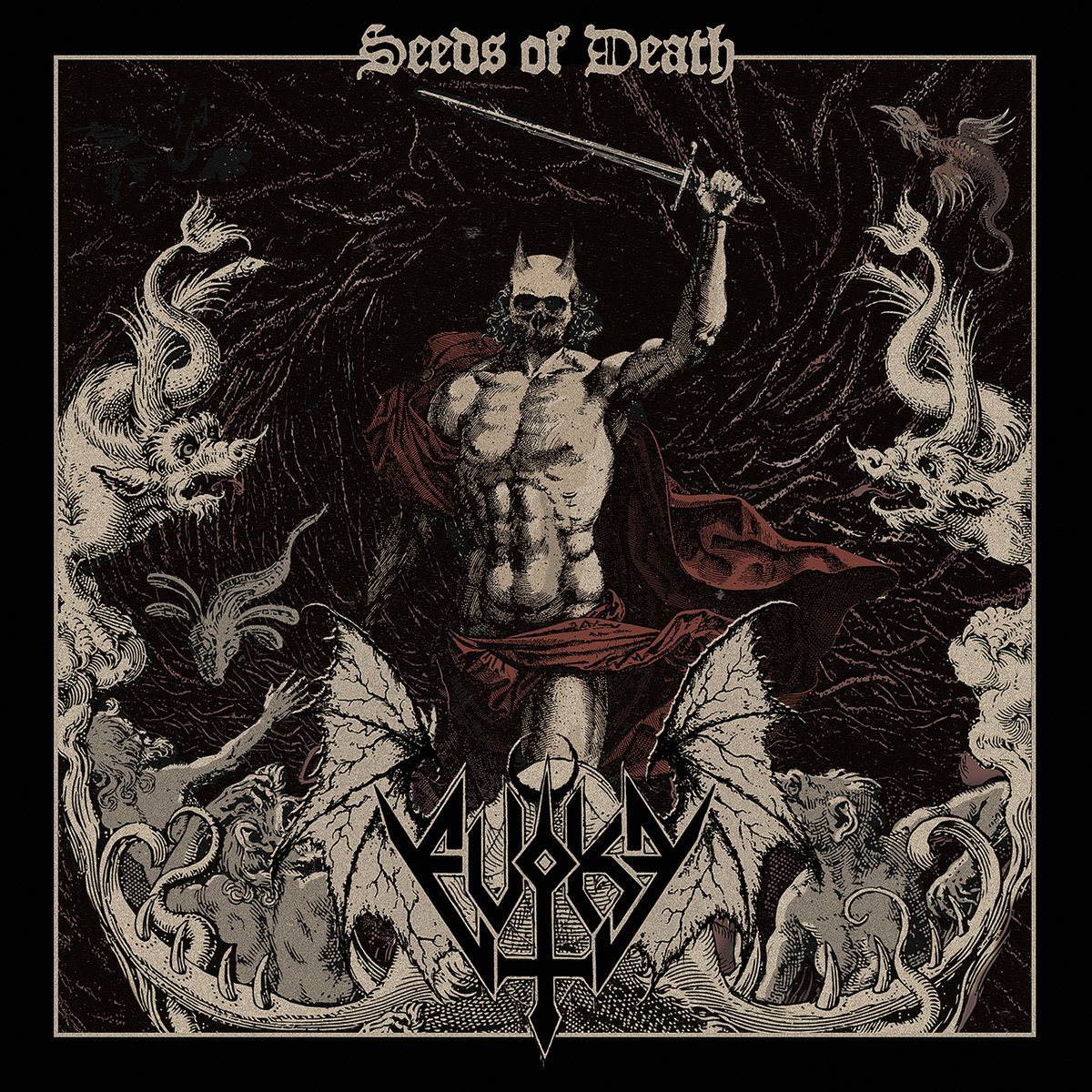 Seeds of Death
by Evoke

Norway’s become one of my favorite countries to look for speed metal and thrash over the last decade, with bands like Deathhammer, Nekromantheon, and Condor leading the charge.  One of the newest groups to join the fray has a vocalist who’s played live with two of those, so that’s a pretty good starting point for Evoke and their debut full length Seeds of Death.  Formed as a power trio in 2016, Evoke pulls from the same speed metal and thrash template as many of their peers but there’s a noticeable black metal edge to their writing.  It’s a fast-paced album that flies by with speed and fire, and while this power trio doesn’t reach the same heights as some of their inspirations just yet this is still a fun listen that has the beating heart of the 80s.

The instrumentals have been heavily influenced by the rabid South American thrash bands of the 80s, and there’s also a healthy dose of early Scandinavian black/thrash and NWOBHM added into the mix.  From the sudden burst of drums that opens up the title track, you know you’re in for a wild ride that gives you little opportunity to slow down and like the bands they’re pulling from Evoke manage to do this with an immense amount of energy.  While Deathhammer still wins the title for fasted and most unhinged sounding thrash band of the past decade, Evoke is able to reach similar levels of fire and fury with their riffs as they batter you into oblivion.  At times I’m reminded of one of my favorite black/thrash groups Nifelheim, as the guitar work has that similar scorching tone that doesn’t let up for a second but there’s a bit more NWOBHM and classic speed metal to be found in the way this trio structures their songs.  It’s admittedly a little more polished than some of the classic South American artists, as Evoke plays this material with a considerable amount of precision and don’t have that same feeling of the music almost collapsing in on itself, but the fact that they can bring this type of performance to the genre is impressive and caught my attention early on.  Seeds of Death remains consistent from beginning to end with its onslaught of high flying riffs, but as is typical for this genre the songs do start to blend together and at this stage there isn’t one particular one that truly defines the album and stands out.  This isn’t a bad thing considering the short length, but I think that will be what it will take for these guys to truly hit that next level.

Kato Marchant has performed live with Deathhammer and Condor, but up to this point he’s mainly been known for his skill on the guitar and bass.  With Evoke he steps up to the plate on vocals and is able to deliver raspy screams that are quick and punchy as they echo over the instrumentation.  It’s a similar approach to a lot of the breakneck speed South American bands where the vocals are spit out so fast that they can be hard to keep up with, and in this regard Evoke does this particular variant of metal justice.  If you were in the camp that found Deathhammer’s shrieks and falsettos to be a bit too over the top, the lower screams and growls that are found throughout Seeds of Death are likely to hit the spot.  This type of short burst vocal work has never lost its appeal through the decades, and bands like this continue to showcase why.

Norwegian thrash bands often sound like they’re frozen in time, capturing the genre’s essence to the point that it feels like some of them could’ve recorded this material in the 80s.  Evoke is able to channel this same type of feeling with the rawer edge of their recording and the frantic, high-flying riffs, giving listeners very little time to breathe from beginning to end.  While they’ve left room to further develop their writing and find a balance of styles that truly set them apart, this album gives them a sturdy foundation and is still a must for anyone that loves black/thrash and speed metal.  Seeds of Death is available from Pulverised Records.