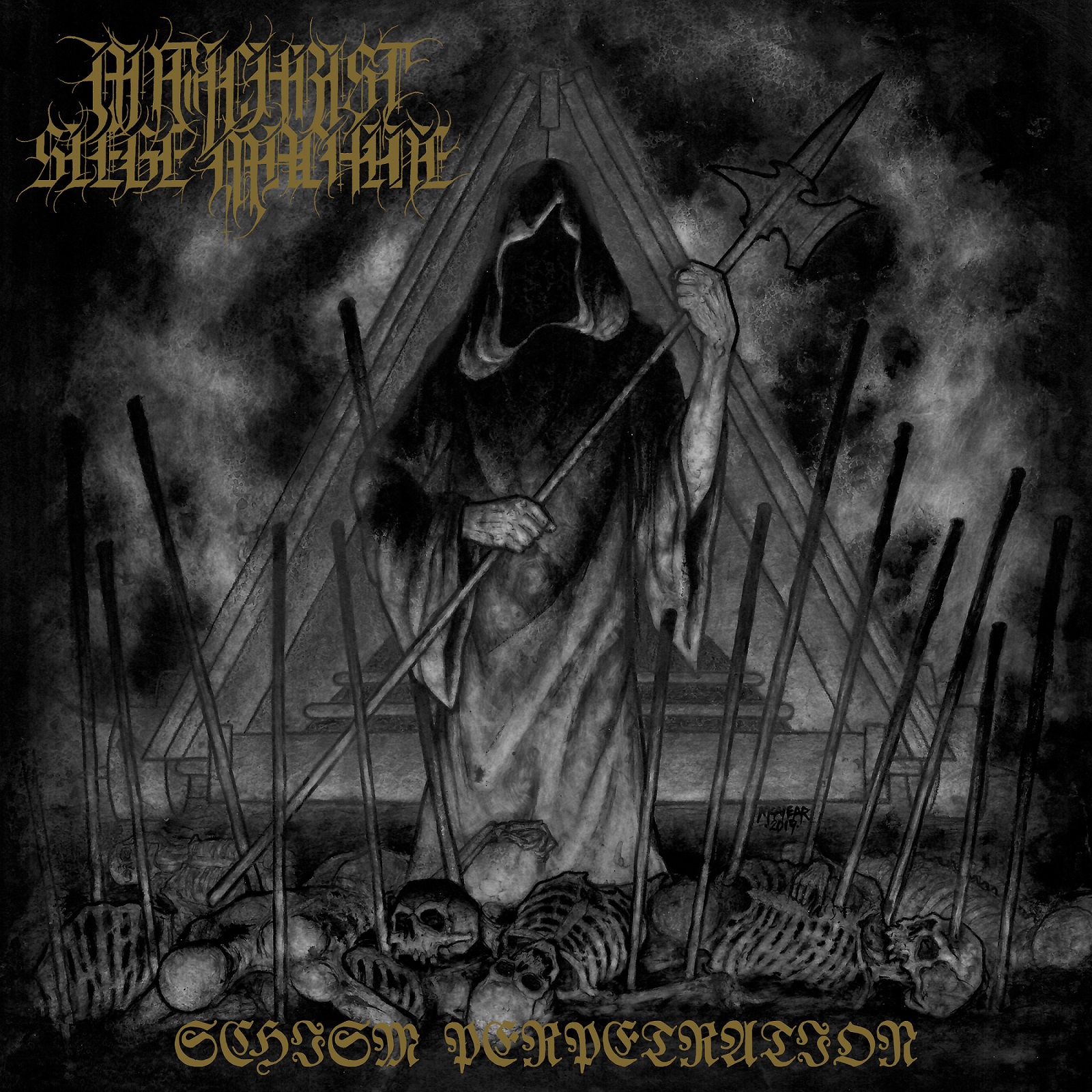 Antichrist Siege Machine has only been around for about three years, but the Richmond based duo has made a strong impression with two demos and an EP that have offered their take on punishing black/death metal.  Taking influence from bands like Conqueror, Blasphemy, and Revenge while also throwing in some destructive death metal grooves, each release has seen the group up the intensity and hone their writing ability further.  This has culminated with this year’s Schism Perpetuation full-length, which finds the instrumentals blurring the lines even further between bestial black/death metal and traditional death metal while upping the intensity through the roof.

The production on Schism Perpetuation is absolutely monstrous, giving each note and drum hit an immense amount of weight that feel like they have the ability to cave your floor in.  Despite the sheer volume and density the recording comes through in a surprisingly balanced fashion, as even though the drums are often one of the most dominant elements they never overwhelm the guitars to the point that you can’t make out the details of each song.  This works to Antichrist Siege Machine’s advantage, as rather than simply blasting away for an entire album they spend just as much time slowing things down and offering the type of crushing groove-laden riffing of traditional death metal.  Not only does this make the album far more diverse than your average release of this type, but it keeps the momentum at a high point and prevents the material from falling into repetition.  It’s rare to find black/death metal that goes for Conqueror and Revenge influence that has songs that are distinguishable from one another, but that’s what Antichrist Siege Machine has accomplished.  Plus some of the feedback throughout Schism Perpetuation feels like it’s going to completely destroy your eardrums at higher volumes, which is all the more appealing.

The guitar and drums might already be as bottom heavy as you can get, but the vocals only help to add even more weight and grit to the album.  Similar to some of the bands that Antichrist Siege Machine take influence from, the primary vocal style is a deep growl that reverberates over the instrumentation with a commanding presence but there are also some higher ranges thrown in at key points.  It may not be a deviation from what listeners have come to expect from this type of metal, but the duo absolutely nails the sheer amount of overwhelming force that some of the best efforts in the genre have to offer.  Each word feels like it’s punching a hole directly through your chest, and the overall destructive nature of the material as a whole is truly impressive.

Richmond’s produced so many quality metal bands over the years and Antichrist Siege Machine is another name worthy of recognition.  While they haven’t been around for too long, their trajectory has swung upwards very quickly and their full-length has achieved levels of destructive and nuanced black/death metal that are stronger than groups that have been around for twice the amount of time.  It will be interesting to see where they go from here, as they’ve weaponized their output to its most potent level yet.  Schism Perpetuation is available from Krucyator Productions and Stygian Black Hand.