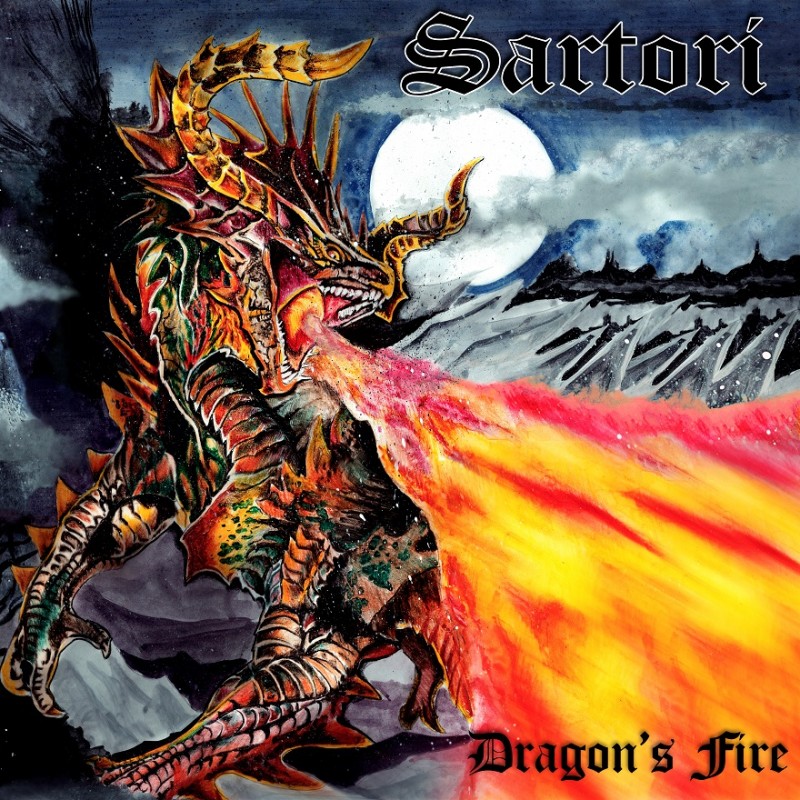 Sartori is a neoclassical heavy/power metal band formed by guitarist Andy A Sartori that sounds like it could have been ripped right out of the early to mid-80s.  While it’s hardly uncommon to find groups new and old channeling this particular type of sound, the crunchier tone and layered vocals throughout Sartori’s debut Dragon’s Fire often make it feel as though you’ve unearthed a lost album from four decades ago.  With songs that emphasize melodic hard rock hooks and aggressive heavy metal with bursts of shredding and classical influences, Dragon’s Fire attempts to find a balance between the complex and the catchy, and while there are still some elements that hold it back slightly those that have heavy metal running through their veins will find plenty to like about this debut.

Opener “Evil Heart” starts off with a faster tempo and a crunchier tone that is sure to immediately bring a number of American heavy and power metal bands from the early 80s to mind.  With the arrangements oriented around Sartori’s guitar work, these songs often have a lot of layers to discover and as you get further into Dragon’s Fire it shows off quite a few harmonized passages that often lead directly into flashier shredding.  Sartori also doesn’t shy away from heading into some hard rock territory at points too, heading into some slower ballads on songs like “One Distant Heart” where the melodic hooks tread that fine line between hard rock and heavy metal.  It can sometimes be difficult for bands to find that sweet spot between technical shredding and accessibility, but Sartori does a decent job with this throughout Dragon’s Fire.  Sometimes it reminds me of the more immediate hooks of a Dio album while other moments bring in the more complex and virtuosic tendencies of an artist like Yngwie Malmsteen.  The two instrumental tracks give Sartori the chance to show off his chops, with “Little Aria in G Minor” bringing in a bit more of that classical flair before the heavy distortion kicks back in.  However, while there are some standout leads and harmonized melodies that kept drawing me back, some flaws do hold Dragon’s Fire back from true greatness.  The drums are a bit too loud in the mix and tend to pop out on many of the songs, sometimes drowning out some of the other details.  It proves to be a bit distracting and overshadows some of the finer nuances, which is unfortunate.  Additionally, despite the complexity of the arrangements there were some elements of the writing that started to feel predictable, especially when it comes to the where the solos were placed in each track.

Scott Board handles all of the vocal work, and if you’ve dug deep into American heavy metal you might recognize him from his releases with Cerebus.  Board has the type of voice that’s well suited for what Sartori is doing throughout Dragon’s Fire, as he often starts off with a melodic yet commanding pitch and can make adjustments to head towards more of a falsetto or slightly gruffer tone depending on the song.  Like the guitar work, the vocals emphasize a lot of different layers and allow for Board to harmonize with himself and deliver some passages that have a grandiose feel.  On “One Distant Heart” his performance falls somewhere between classic power metal and AOR, while the appropriately named “From Hell to Heaven” brings much more of a Dio vibe.  While I wouldn’t say that he reaches that same power and commanding presence as the greats, Board still manages to consistently impress and is on par with the work he did with Cerebus.

Sartori’s debut showcases their ability to balance shredding and neoclassical elements with the catchier, energetic hooks of earlier heavy and power metal.  The drums do tend to overshadow some of the other instrumentation though, and even with the complexity of some of the performances the way the songs all lead into solos around similar timeframes does cause some of them to run together.  This remains an appealing debut though and does feel like Sartori and his crew of musicians are just scratching the surface when it comes to what they can do, so I’ll be interested in hearing what comes next.  Dragon’s Fire is available from Rockshots Records.