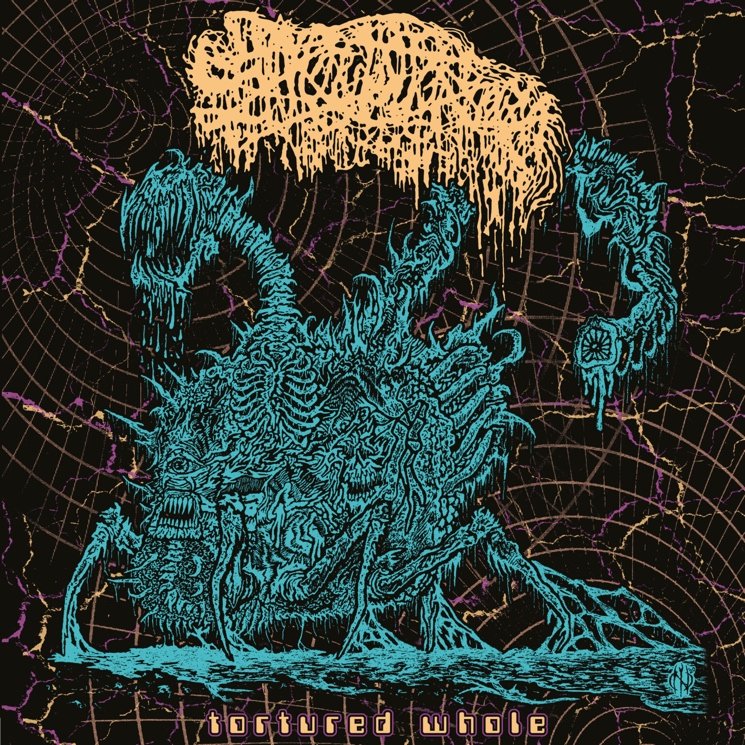 Death metal in recent years has had several bands who seemingly exploded in popularity in a matter of months.  While the likes of Blood Incantation and Gatecreeper had some material out there already before hitting a level of notoriety where it felt like you were seeing their t-shirts at live shows everywhere, Ohio based Sanguisugabogg seemed to achieve this in a record amount of time.  Following an eleven-minute demo Pornographic Seizures in 2019 they began appearing on a lot of shows and eventually signed to Century Media.  Their latest effort Tortured Whole goes for an old-school and simplistic approach that falls somewhere between the meat and potatoes type of death metal and its more slam-oriented brethren.  It’s a fun listen that sometimes feels like it’s a bit one-dimensional and better as a whole audio/visual package, but it’s still easy to see why people will appreciate this one.

Although I was under the impression that Sanguisugabogg was a bit closer to the Morbid Angel and Autopsy type of old-school death metal, from opener “Menstrual Envy” it becomes clear that the overall sound is going to fall a bit closer to Cannibal Corpse, Mortician, and some of the more straightforward brutal death metal out there.  Some of the tonality does bring Autopsy to mind, but the clanging of the snare drum and heavy chugging grooves channel a bit more Devourment and early 90s brutal death metal/slam.  I’m sure for some the prominence of the snare drum is likely to be a point of contention, but having heard much worse than this over the years I think Sanguisugabogg nails a nice balance between how much the snare pops out from the rest of the band.  Once you have a basic idea of the type of lurching grooves and weight that the instrumentals have to offer on the first two tracks, you’ll have a good idea of what Tortured Whole has to offer as the writing goes for subtle tweaks of this formula rather than radical reinventions.  This is broken up by synth interludes “Pornographic” and “Interlube” which bring an 80s B and C horror movie vibe with them, and these end up being surprisingly fun.  I actually would like to see these types of interludes further integrated with the death metal itself, as this seems to be an area where Sanguisugabogg could further differentiate themselves from their influences.  The caveman like simplicity does work and this is enjoyable to jam out to, but some of the songs drag out one groove without reaching a truly satisfying climax and they do start to blend together a bit, leaving room for a bit more development down the road.

One element that I love about this album is Devin Swank’s vocals.  Swank moves between the guttural growls and gurgles that you’d expect from the most brutal of death metal bands, but there are subtle shifts in pitch that make his performance come through with a bit more variation than is typical.  He really sells the gore and horror-soaked vibe that Sanguisugabogg channels throughout Tortured Whole, and is able to hit some levels of distortion that sound genuinely monstrous.  It’s also worth mentioning that his growls feel a bit more rhythmic, as though they’re naturally playing off the grooves the guitar and bass are working with.  You know exactly what you’re getting here, but damn is it good.

Don’t get me wrong, there’s nothing wrong with meat and potatoes death metal and there’s plenty of reasons why bands like Jungle Rot have gained fans while only making the smallest of tweaks to their approach over the years.  Sanguisugabogg knows their audience and delivers the brutality and gore, and while it’s lacking the same stand-out riffs and uniquely identifiable songs that some of their classic influences did, this is still a great starting point.  For me I think they could still offer a few more twists on the formula and maybe even integrate the synth and horror interludes into the material better to truly stand out, as the Troma produced music videos and overall audio/visual package is just a bit more appealing than the album by itself.  If you’re huge into slam and brutal death add a point to this score, but I’ll be waiting to see how this group is able to build on this debut.  Tortured Whole is available from Century Media Records.