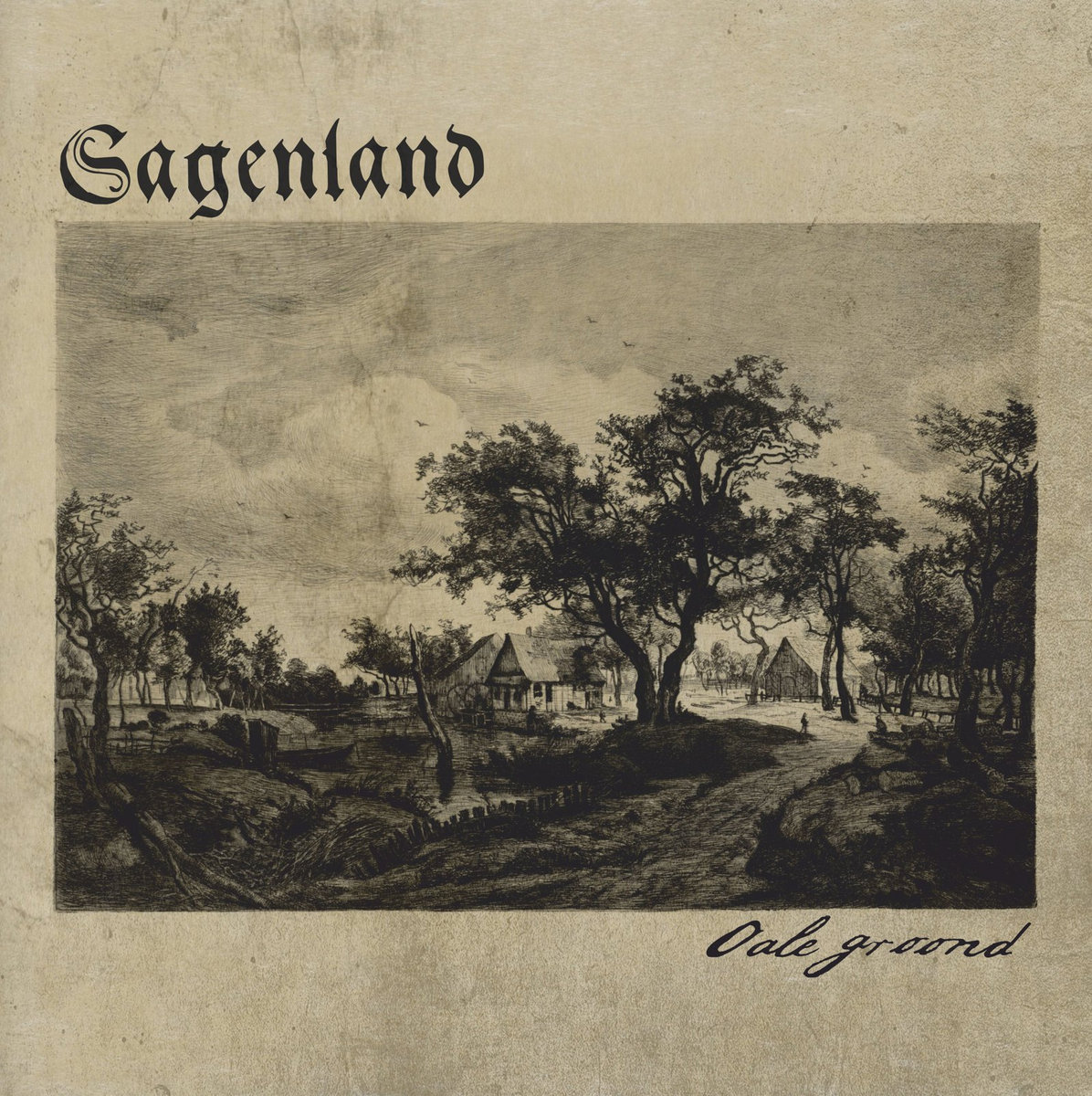 More and more black metal projects have come out of the woodwork in recent years after years in dormancy, with some releasing their debut full length two decades after a handful of demos in the 90s.  Dutch black metal band Sagenland falls into this category, as they formed in 2001 and have ideas that date back to that fertile period of the 90s yet are only just now releasing their debut.  With only one split released back in 2005 that wasn’t widely circulated due to the label closing, chances are you haven’t heard the name before but are likely to recognize the two musicians behind the band as they’ve put out material with Asgrauw, Meslamtaea, Heimdalls Wacht, and Cultus.  Similar to how each of those groups have channeled different elements of black metal, Sagenland treads their own path on Oale groond, writing material that recalls the raw and folky elements of the second wave while adding in some local character.  It’s a quick listen at just over half an hour, but the immediacy of the entrancing melodies and rougher textures is sure to hook black metal fans and keep them coming back for more.

There are so many groups out there paying tribute to the second wave of black metal, with many of them pulling from the same template and remaining indistinguishable from their inspiration.  Sagenland avoids running into this by not only pulling from the folk-leaning side of that early genre era (think Ulver’s initial material), but also due to just how strong the individual songs are.  “Weer thus” kicks things off with the sound of a trumpet and the crackling of a fire with bird chirps off in the distance, but the calmness doesn’t last for too long once “De jammerklachten van Singraven – eerste deel” begins.  What you’ll immediately notice from Oale groond’s take on black metal is it retains the rawness and jagged edges of the 90s and brings the bass to the forefront with an emphasis on sweeping melodies that are played on a fretless bass.  Here Sagenland is reminiscent of Dødheimsgard’s Kronet til konge due to how important the bass is to these compositions, rather than it just serving as an instrument that largely gets washed away in the mix.  It’s an approach that instantly drew me in, as the melodies wash over you in a way that portrays equal amounts of beauty and power, bringing to mind marching to battle through vast forests but occasionally stopping to take in the landscape around you.  The duo also incorporates a lot of acoustic guitar, both during their abrasive black metal and in the form of interludes that help to break up the attack.  There’s a roughness to the recording at times, with certain notes popping out of the recording and the bass sometimes threatening to overpower the rest of the instrumentation, but it suits the overall sound and it’s appealing to hear minor imperfections left on an album in an era where so much metal is overly polished and sterilized.   It’s a fairly brief listen, going for less is more at just over thirty minutes, but it’s clear that not a minute is wasted as each song has a stand-out riff or melody and I’ve found myself wanting to dive into this album again and again.

Both members contribute vocals to Oale groond, and the trade off between the two results in a performance that feels much more dynamic than is typical for this type of black metal.  The first taste of vocals you get is on the second track where the two members trade off lower pitched screams with much higher shrieks and some distant warrior-like yells during some of the most intense moments.  The interplay between the two works well and helps the individual sections of the songs to have some distinguishing moments, giving some additional depth to Sagenland’s material.  With the third song “De jammerklachten van Singraven – tweede deel” the folk influence creeps in, as you get much softer chanting and singing that immediately transforms the overall tone into something more enchanting.  It’s during these moments that the band pulls in more of that early Ulver influence, but it’s flavored by the character of their local area in the Netherlands and this keeps things feeling fresh.

Sagenland’s debut has been a long time coming, but with a sound that is beautiful and abrasive in equal capacity with real substance to back it up it’s a stunning early highlight of 2021.  This type of jagged black metal where imperfections sometimes pop up on the recording likely won’t be for everyone, but it feels genuinely authentic and captures the spirit of those classic 90s albums in ways that few can in this modern era.  With one stand-out moment after the next, I suspect I’ll still be talking about this album for months to come and hopefully it’s the start of more activity for Sagenland as I’d love even more material without another sixteen-year wait.  Oale groondis available from Heidens Hart Records.