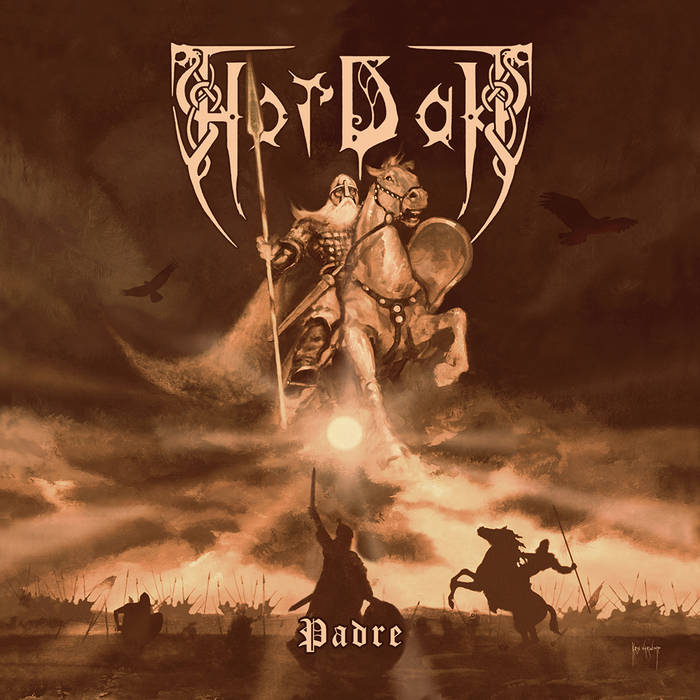 Hordak is a folk-tinged pagan black metal band from Spain.  Saddle up and grab your sword, we're going to battle.  Featuring guest appearances from Forefather, CrystalMoors, and Folkearth; Padre serves in many ways as a tribute to folkier moments of early second wave BM fused with plenty neoclassical elements.  Some might begin to consider works like Enslaved's Frost or Blodhemn albums, but several moments actually made me think of Immortal's At the Heart of Winter.

Conscious or not, there are clear influences of that album on both the vocals and guitar sounds.  Avoiding the deep, death metal vocals of many popular viking bands , Hordak favors a somewhat croaky, throaty delivery.  The resulting grimness seems to slither and seep into every crevice of the music; permeating it like a sickness.  Meanwhile, many of the minor chord progressions, picking style, and even choice of tone on the guitar are certainly reminiscent of Abbath's signature style.

But you're not likely to find many of these corpse-painted peers engaging in the styles of solos and certain riffs on Padre.  The aforementioned neoclassical elements and influence of melodic death metal are apparent as they suddenly ride forth from the sheen of blackened despair.  Comparisons might be made in these instances to Manegarm, Windir, or even Exmortus, though the delivery is much more purposefully subdued.  Even so, tracks like "Ekleipsis," "A Leader in Times of War," and "Padre" have their own level of pomp.

Suffice it to say that this is one of the better folk albums in this particular style I have heard in a while.  Along with the more symphonic Vorna and increased bombast of the Ensiferumish Wolfhorde, there is more than enough blackened folk metal to go around right now.  Padre has been out since 12/20/15 and is streamable and purchaseable below via Bandcamp.  If you enjoy any of the other bands I've mentioned, you need to hear it today.