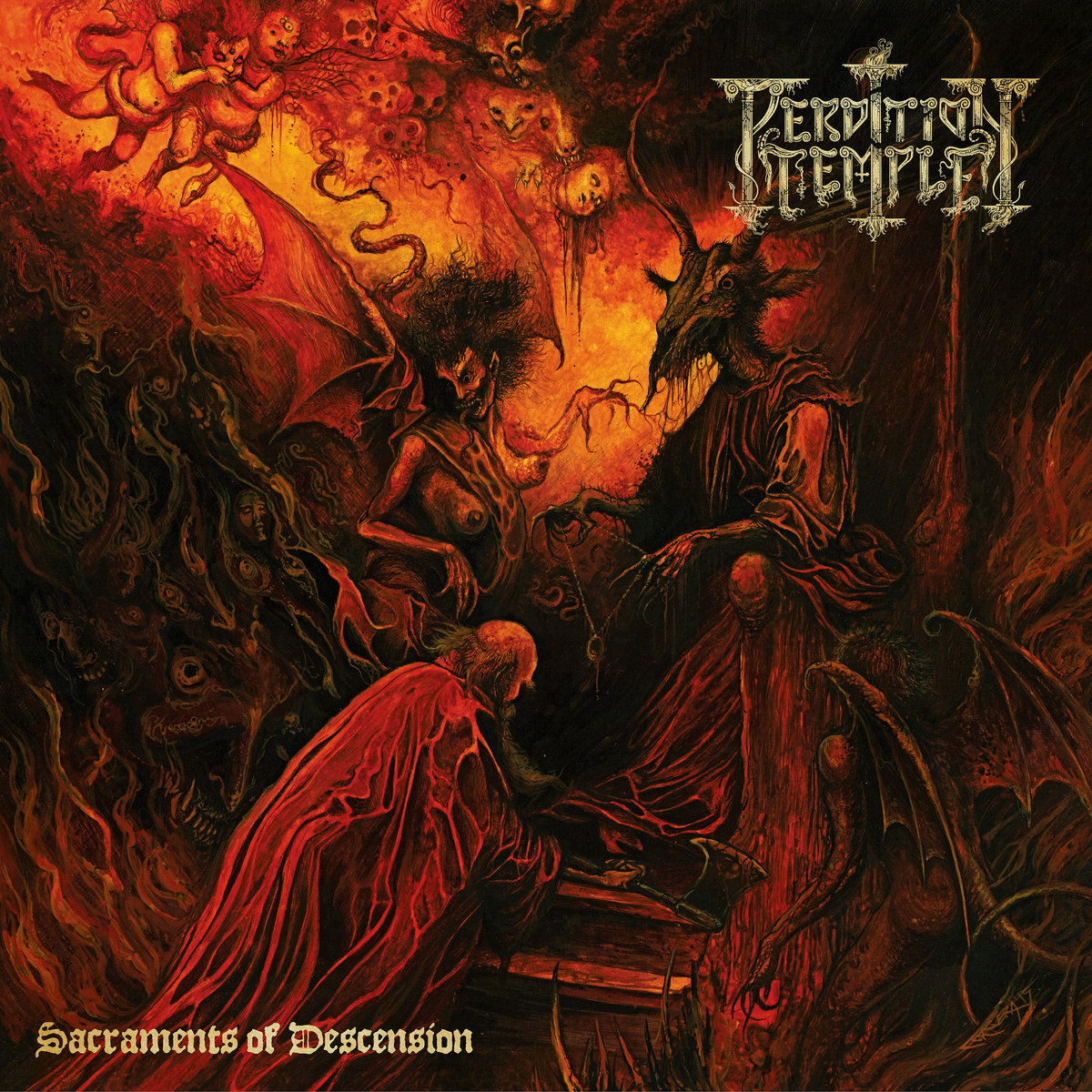 Sacraments of Descension
by Perdition Temple

Formed not long after the dissolution of Angelcorpse in 2009, Perdition Temple sought to blaze a similar path of relentless blackened death metal with the type of churning, technical riffing that founder Gene Palubicki had become known for.  The last time we heard from the band was 2015’s The Tempter’s Victorious, where Black Witchery’s Impurath was brought in on guest vocals, but for follow-up Sacraments of Descension Palubicki has taken the vocal position back over while still providing plenty of blistering guitar leads and solos.  It doesn’t significantly deviate from what Perdition Temple has gone for since their inception, but this whirlwind approach that barely lets the listener breathe from beginning to end remains as appealing as ever and showcases the same fire and precision as the classic acts from decades ago.

With little in the way of intros or interludes, Sacraments of Descension feels like a marathon of technical riffing and drumming that gives listeners very little chance to catch their breath.  It’s an approach to death metal that is reminiscent of Gene’s playing in Angelcorpse as well as from classic bands like Morbid Angel, as the riffs change gears regularly and give off an adventurous feel as they challenge you to keep up with everything that is happening on each song.  In the hands of less experienced musicians this would likely devolve into a sloppy mess with transitions that didn’t work, but here it’s delivered with precision and every change in direction is executed with ease as the instrumentals pummel you into oblivion.  Compared to the previous two Perdition Temple albums there’s a slightly cleaner tone to the recording, giving a bit more balance between the guitar, bass, and drums without losing any of the intensity of the performance.  It’s an approach that works to the band’s advantage, as while it’s not quite as old-school sounding each song feels immense and scorches you with each riff and solo.  There’s a thrashier undertone to a lot of the riffs, as the guitar work still recalls that time period where thrash and death metal weren’t as loosely defined, all wrapped up in black metal’s hellfire atmosphere.  Admittedly with the emphasis on technicality and constantly changing riffing this is an album best taken as a whole rather than as individual songs, as there aren’t always clear endings and beginnings and some of the elements do blur together.  It may not always be easy to pick out individual sections, but Sacraments of Descension still remains one whirlwind of a ride that you’ll want to get on again and again.

Seeing how fast and fluid the songwriting is throughout Perdition Temple’s material, it can’t be easy to deliver vocals that are able to keep up this frantic pace.  With Gene back behind the mic that isn’t an issue though, and while his raspier screams aren’t quite as distinctive as Impurath or Pete Helmkamp they suit the style this album is going for perfectly, giving each song a bit more bite.  The vocals are prominent in the mix and stand slightly above the instrumentals, giving them additional power as they weave in and out of the riffs.  It’s a familiar approach for anyone that’s spent even the shortest of time with this branch of death metal and while the pitch doesn’t deviate that frequently the performance remains just as scorching and in your face as the rest of the band.

With Perdition Temple taking about five years between albums, it’s clear that the longer incubation periods are well spent and focused on refining the band’s take on blackened death metal down to its most razor-sharp level.  Although the more fluid nature of the writing does make it harder to pin down specific songs, there remains plenty of appeal to the ever-changing attack and take no prisoners approach that this album adopts.  Where others from US death metal have faltered since their earlier days, Gene Palubicki and company show no signs of slowing down.  Sacraments of Descension is available from Hells Headbangers.