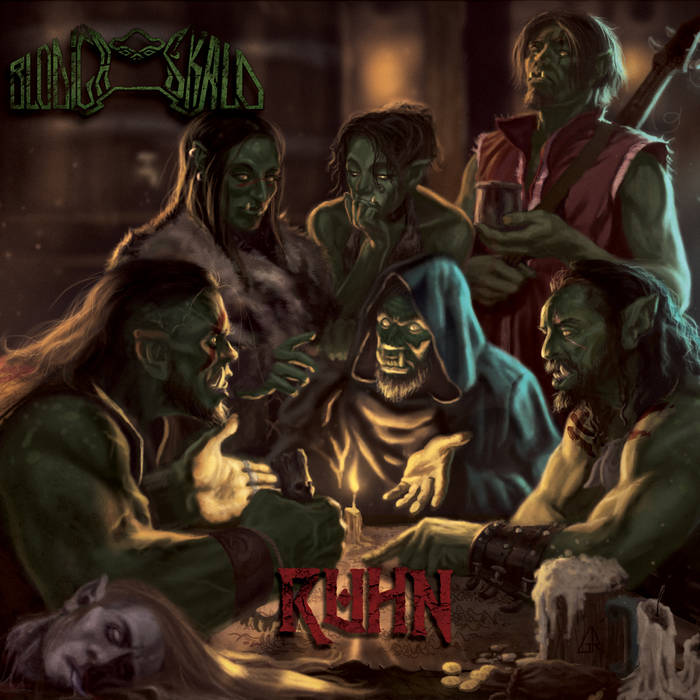 What I Like: I can tell that a lot of love and care went into this record. Not only is the music great; each song has its own artwork. That may not seem like a big deal, but it's one of those small touches that gives a release extra vitality and character. And as the imagery implies, Ruhn is opening us up to a lush fantasy world that is just as fun as it looks. This is an album every bit as enthralling as early Ensiferum, Equilibrium, and Svartsot.

Blodiga Skald show versatility in their tone with more sombre, harpsichord-infused compositions like "Folia" alongside bouncy, humorous jaunts like "No Grunder No Cry" (a play on the Bob Marley song "No Woman No Cry"). The grumbly, orcish death growls and folky guitars do plenty to kick off the proceedings on their own; but once again I must tip my hat to the additional instrumentation. The aforementioned accordian and harpsichord as well as flutes and some truly admirable work on the fiddle are the spice that makes this mutton so deliciously succulent. I don't dance, but I might partake in a gypsy jig for "I Don't Understand."

Critiques: This has all largely been done before. Blodiga Skald do a good job of writing strong music, but it'll take more than that to really stand out. There are also a few moments where the vocals sound like they are trying a little too hard to sound like a live performance hyping the audience ("Panapiir"). Save that for the actual stage.

The Verdict: Ruhn is a rollicking good time from a band that is sure to be even more fun live; and that's saying a lot. Blodiga Skald may not be contributing anything new to the genre, but they are certainly holding the classic sound to a high standard. Calling all goblins, orcs, and Uruk-hai; hear the song of your people.

Flight's Fav's: Ruhn, No Grunder No Cry, Laughing with the Sands