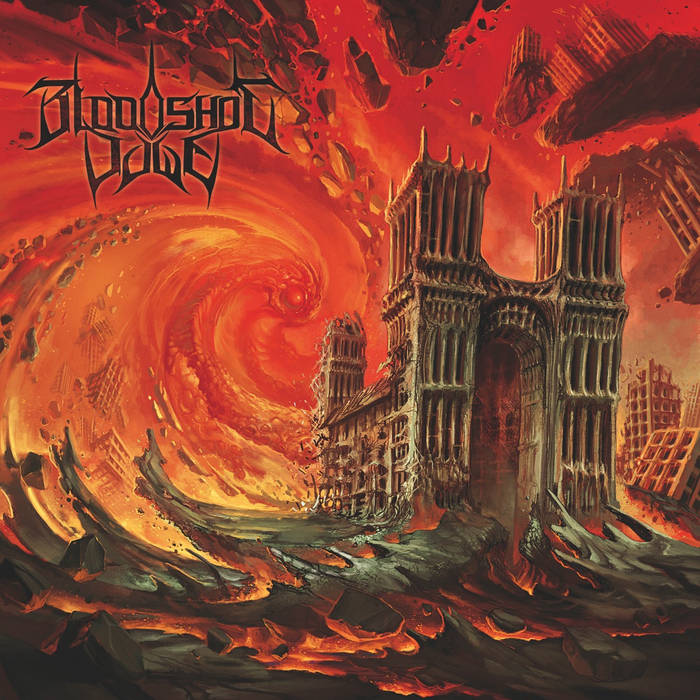 After listening to (and loving) Bloodshot Dawn's 2014 release, I was encouraged to check out their debut as well. With all of the new music constantly flying by, I was not incredibly enthusiastic about this at first, but right about the time that “Godless” kicked in, I had very few regrets. The riffage here is nuts. Thrash and melodeath combine to sear your flesh. And those solos...

Now I will come out and say that this self-titled effort lacks some of the polish of Demons, HOWEVER, if you came for hooks then that is precisely what you will get. Just listen to that noodling on “Vision.” Just do it. See what I mean? Not only are they technically proficient; they have a feel to them. I listen to guitar work like that and I am transported to another place. It's meditative for me. The scorcher almost halfway through “The Quantum Apocalypse” actually reminded me of Extreme's “Do You Want To Play?” and I wish that “Prototype” had been developed into a full song rather than just an awesome tapping interlude.

And then...there's the drums. Sweet merciful Jebus. He's doing it right. Every piece of the kit is utilized as if someone might walk off with it during a break. This guy's mom told him she's going to return anything he doesn't use for more than 30 seconds. Not only are the beats above the skill level of most upstart bands, but the production is also pretty solid for a debut. It gets the job done.

”Okay,” you might say, “but I can get my face melted by Demons already.” True, but there is something that this album has that the other does not: a big heaping emphasis on the “death” in melodic death metal. The vocals can get pretty brutal with quite a bit of low-register grunting a la Svartsot or Whitechapel. Understand that Bloodshot Dawn is in no way folk or deathcore, but they are the closest comparisons I can think of when it comes to the harsh tones of the lead singer. I count it as a plus that his style does not correspond directly to any of the hundreds of other melodeath acts out there. Anyways, these grunts break up the more traditional half-shouted delivery of certain lines which is more prominent on their sophomore effort. The alternation keeps the listening experience varied and more enjoyable in my opinion.

So yeah, you should probably buy this album, or at the very least listen to it. Both this self-titled effort and 2014's Demons are super cheap and a great value for any melodeath or guitar fan out there. Head to their bandcamp page by clicking below. Don't forget who sent ya.