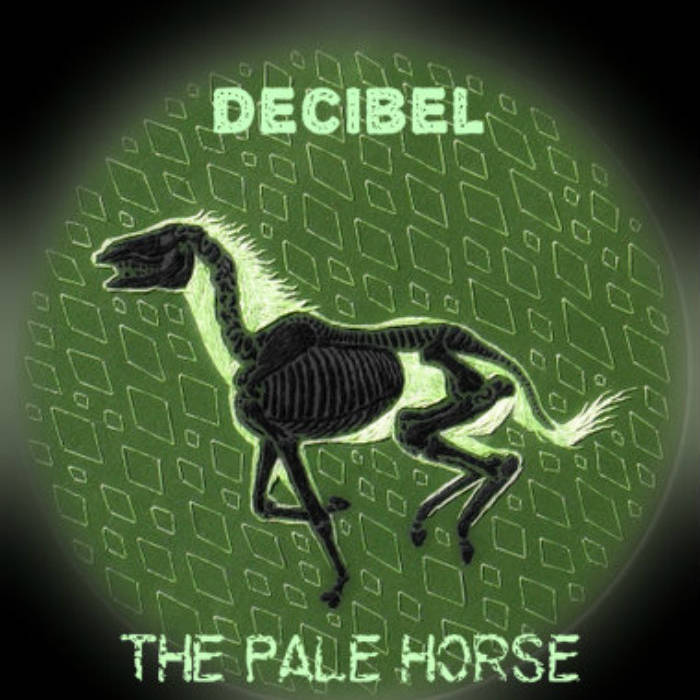 Hey, it's the return of busy underground metalhead Trevor Brown, and his one-man anarchy machine, Decibel, out of Castle Rock, WA. You may have caught our multi-review earlier this year of the previous catalogue, from the doomy to the death metal. Trevor has quite a variety of tastes and interests it seems, and that plays a big role in his latest album, Pale Horse.

I am most happy to say that Decibel has kept the Alice In Chains grooving grunginess I loved about Malice. It's just that the vocals have now amped up the heaviness guage to death. Expect deeper growls, higher screeches, and some Anselmo-esque stuff in between. I also spoke a lot about nihilism as a theme the last time around, and this too seems to have gone up a notch. A wise, green man once said, "Fear is the path to the dark side. Fear leads to anger. Anger leads to hate. Hate leads to suffering." That's actually a pretty good summation of Decibel's sound.

Chunky, Fieldyish bass guitar compliments the thump of each bass drum kick. You gotta love those triplets on "Ghost of You." And despite the raw, live feel of the recording, each tom hit rings through. And just take what I just said into consideration again: this album sounds like a band playing live...but remember this is the work of just one dude. There are dozens of recordings each year that are recorded with a full band that fail in achieving this quality.

The guitar is likely to get your head bobbing as well. In particular, there is an interesting seperation of guitar and drums patterns on opening riff of the "Infinite Black: Pt. 1" That vaguely reminded me of Mehshuggah's "Strengah." I feel this is a good example of how Traevor is quite capabale of backing his distorted grooves with some complex songwriting. Then there are the dips into spacey, almost psychodelic guitar during the interlude and throughout the album. These softer parts alternatively brought to mind Deftones; with their post-rock, effects laden guitars and melancholy, wispy vocals Chino is known for.

Now, unfortunately, I will say that this variety leads to some shortcomings as well. For all of the merits from song to song, Pale Horse definitely feels uneven at times given the amount of ideas floating around. This is extra apparent given that this is a much longer album, which could also be seen as a plus since it is like two for the price of (if you're stingy) none. I will also say that the clean singing could use some work. There is an endearing, appropriate quality to its current form, but I could see furture releases coming out stronger in this area.

But even critiques aside, I still enjoyed playing this through during my morning commute. In a way, it's kind of a weird conglomerate of Pantera's slower moments ("This Love") mixed with a gothic vibe coursing through songs like "Red." All of this fits the album title, which for those in the dark is a street name for Heroine. I've been given Morphine (quite similar chemically) in the hospital before, and I think the atmosphere of this album is close to what a binge and withdrawl might feel like.

I was glad to hear from Trevor again, and I hope you will all give this latest outing a go. There are some really neat new elements I would like to hear more of, especially those lovely softer guitar leads on "In the Name of God." The album can be streamed below and purchased at the price of your choosing.