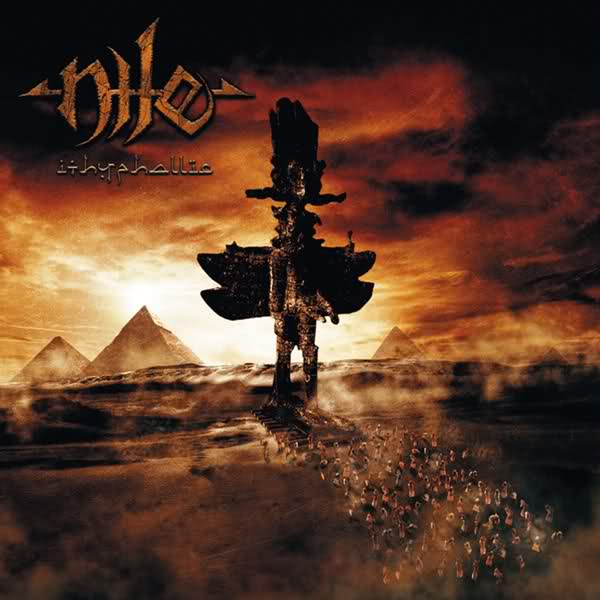 Nowadays, you may witness a lot of musical acts that like to grab the attention of prospective listeners through some sort of a gimmick. You've had bands like Slipknot and Mushroomhead who of course have their large lineup and like to wear masks/play dress up; and, there are the likes of other musicians who like to put on some sort of theme...leading to subgenres like partycore, aliencore, funeral doom and more. Likewise, today's band happens to be one of those that pioneered the so-called 'Egypt death' theme and incorporated it into their music early on in their career (and it surprisingly really stuck and held up). NILE is a technical death metal outfit from Greenville, South Carolina that's been around for about 25 years now and has gone through some major lineup changes since their inception. And now, we're here to discuss their album Ithyphallic.

Released through Nuclear Blast back in 2007 as the band's fifth full length effort, Ithyphallic was actually NILE's debut on this particular label and features trio Karl Sanders (guitars, vocals), Dallas Toler-Wade (bass, vocals) and George Kollias (drums). The artwork depicts a large statue of Ancient Egyptian god of fertility "Min" and most of the track titles are direct references to other themes related to mummification, the 'Book of the Dead', H.P. Lovecraft and more. Consisting of ten songs and culminating in nearly fifty minutes of tech death content, I'd safely say that this was among the otufit's most ambitious offerings. So let's get right into it.

Now, I know what some people may be thinking. "Why didn't you just do a review on In Their Darkened Shrines?" Well I've given it some thought and, after revising this one, I can say that it easily stacks up to the former. The same atmosphere is there and the production quality on here is better than ever. Ithyphallic begins with one of my fave NILE tracks and perhaps one of the album's most fleshed-out compositions, 'What Can Be Safely Written'. This track opens up with a pretty sweet melodic orchestra that goes into old school NILE riffs and blast beat drumming later on. And, the song that follows immediately afterwards really gives off the fast paced, relentless vibe that makes this album tick. The solos and riffs are endless, as are the  stellar vocals and melodies. Meanwhile, 'Papyrus Containing the Spell..." is yet another heavy hitter and one of the band's singles. The rapid structure, chaotic chromatic and tremolo riffing, and astounding chorus come together to make it one of NILE's most memorable songs to date. 'The Essential Salts' is also a personal fave due to the insane guitar solo action midway that leads into a very somber, yet hypnotizing melody that closes out the song. From the previous three tracks alone you could get a taste of how and what makes this band tick. It is undeniably definitive NILE in its greatest form. Come to think of it, there are also certain parts of Ithyphallic that are a bit reminiscient of In Their Darkened Shrines. For example, the intro riffs and pattern in 'The Essential Salts' sounds a lot like that of 'Execration Text'. Also, there is a track in the center of the album that is kind of a slow burn akin to 'Sarcophagus'. The instrumental track that comes in later on serves as a decent breakaway from the chaos comprised of some pretty sweet melodies and tribal instruments. It's an alright buildup and intermission for the second half, even if it isn't memorable, per se.

In all, it's rather difficult to determine whether or not this release is superior to the highly praised In Their Darkened Shrines. The presence of George Kollias, in his second outing with the band, is a definite preference considering his high quality and ability level. Ithyphallic, being a slightly shorter album, also goes at a much faster pace, making it seem less repetitive and more enthusiastic as a result. The performances themselves are about on even level with those of Annihilation of the Wicked and previous, albeit with more catchy and memorable melodies, destructive riffs and tasty choruses to write home about. Personally, I really enjoy this album to its fullest extent and can safely relisten to nearly every minute of it on impulse; it holds up and gets better the more you listen. Tech death fans should, nonetheless, all give this one a go (if they somehow haven't already) for its classic sound and atmosphere alone...and, if you already know this one, do yourself a favour and revisit it sometime soon, you'll be glad you did.

Fave Tracks: 'What Can Be Safely Written', 'Papyrus Containing the Spell to Preserve its Possessor Against Attacks from He Who is in the Water', 'The Essential Salts'

For Fans Of: Cool gimmicks, fast paced tech death, and all around stellar riffs