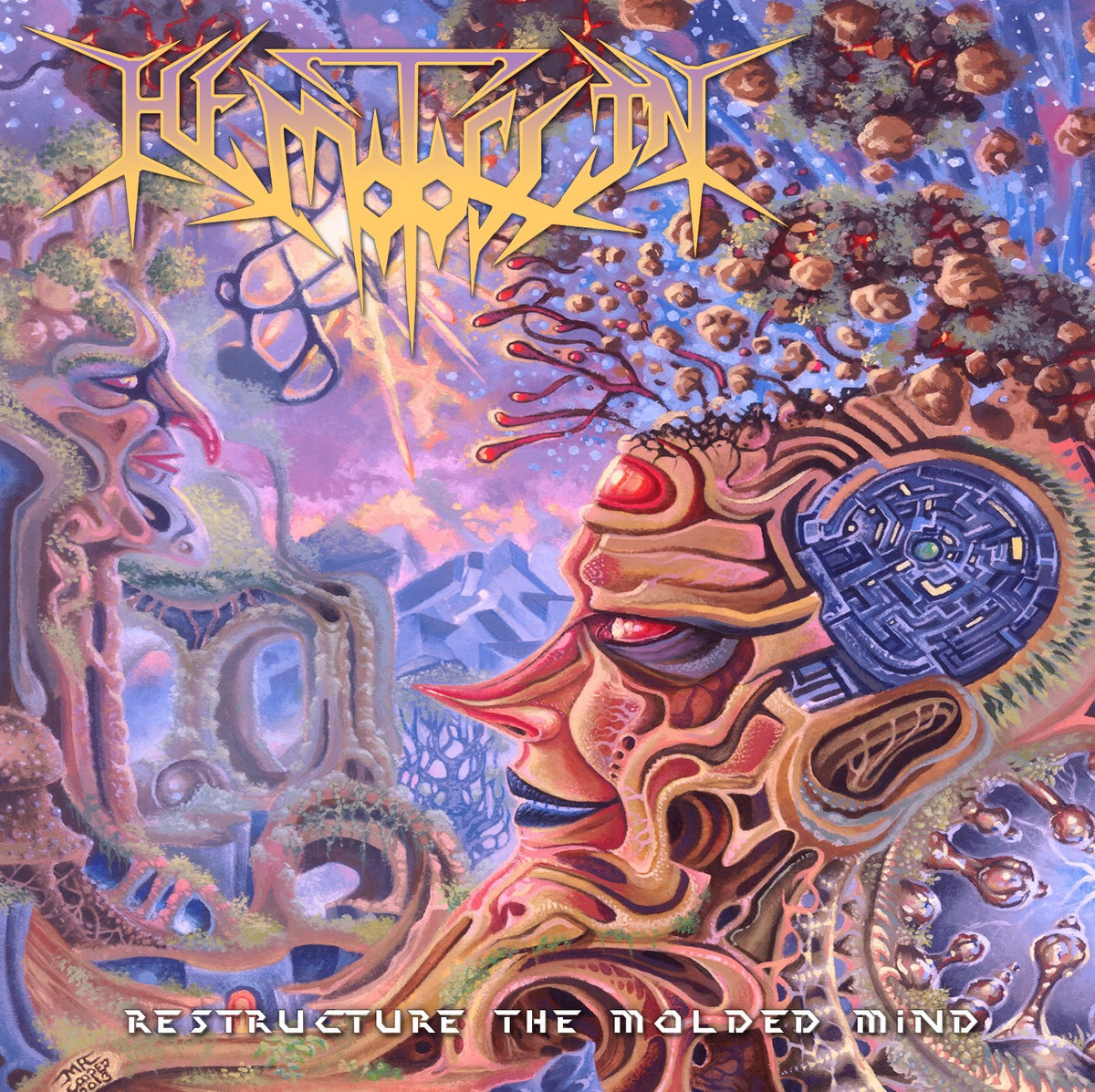 Restructure the Molded Mind
by Hemotoxin

California’s Hemotoxin has only been around for about a decade, but their sound would have you think that they hail from a few decades earlier than that.  The progressive thrash/death metal band channels a sound that recalls when the two genres were in their earlier days and blurred together a bit more, all wrapped into a technically proficient and ever-changing framework.  On album number three, Restructure the Molded Mind, the group keeps things at a blistering 28 minutes and crams in more ideas in that span of time than some can in an hour.  While it’s the type of release where not every song stands apart on an individual basis, everything flows together seamlessly and it’s a whirlwind of a listen that’ll have you wanting to buckle back in and take the ride all over again.

There’s a healthy amount of Death influence to Hemotoxin’s sound, but the instrumentals pull from plenty of other territory throughout Restructure the Molded Mind.  What stands out is how well the lines between thrash and death metal are blurred throughout the course of the album, as there’s pretty equal influence to the riffing and the tonality shifts regularly depending on what song you’re on.  No matter where the group heads they keep the sound appropriately old-school, as the bass lines pop out at you and the drums have a crunchier feel to them.  While plenty of bands have tried to play the retro card when it comes to these metal genres, Hemotoxin deliver it in a way that convinces you they could’ve been there in the heyday and that’s definitely a large part of the appeal.  With the writing taking a progressive slant the songs rarely end anywhere close to where they started, and there are more transitions and technical riffs than you can keep track of the first time through.  It’s a whirlwind of an album where certain leads jump out at you initially and then the rest of the details come with repeat listen, but the parts that do get you on that first time will convince you to dive deeper.  With that being said, the constant shifting does result in the songs not having as much individuality and instead contributing more to the album as a whole, which could be an issue for some.

Michael Chavez has a raspier scream that channels quite a bit of thrash influence, and it’s delivered in a way that makes it easy to make out the lyrics from one song to the next.  There’s quite a bit of separation between the vocals and instrumentals in the mix, to the point that Chavez sometimes sounds like he’s towering above the recording.  But despite how prominent the vocals are they never completely overwhelm or take away from what the rest of the band is doing, giving Hemotoxin that fine balance between the two elements.  His pitch may not deviate significantly over the eight songs, but given the concise length that ends up not being too big of a deal and the intensity remains consistent from beginning to end.

Hemotoxin crams a lot of ideas into a short period of time, but they nail that blend of progressive thrash and death that can be hard to find these days.  There’s a lot of impressive playing to discover throughout the album, and while it can blur together a little I’m still finding certain sections that are stuck in my head days later which is more than can be said about your average death metal album.  Restructure the Molded Mind is available from Unspeakable Axe Records.