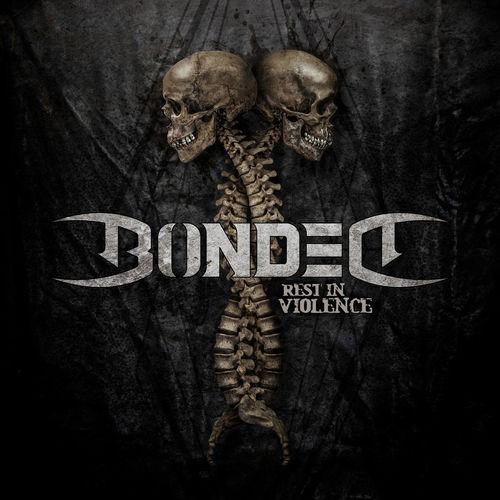 Rest in Violence
by Bonded

Germany’s Bonded may have only formed two years ago, but they’re made up of veterans of European thrash.  Containing members that have played with Sodom, Suicidal Angels, and Assassin (to name a few), there’s certainly a lot of musical knowhow going into this band.  With this base in place, the group’s debut album Rest in Violence strikes a balance between old and new rather than going for a purely 80s throwback, touching upon some of the blistering speed and rawness of old thrash while channeling some of the groove and pummeling force of the more modern variants of the genre.  While it does have a few songs that drag, the high points showcase plenty of potential for Bonded and make them a worthy addition to a crowded metal genre.

The use of the words modern and groove are sure to result in some eye rolls from some of the thrash purists out there, but given how many crossover and retro revival bands are out there right now the mix that Bonded has on Rest in Violence feels refreshing, especially given how well done it is.  “Godgiven” starts things off with a mid-tempo approach that has some prominent grooves and instrumentation that has an immense amount of weight to it, but it isn’t long before the tempo kicks up and the band demonstrates that they can do old-school thrash as well as the best of them.  The title track is one of the better examples of this with high flying guitar leads that lead nothing but scorched Earth in their wake, and you’ll find a number of songs throughout Rest in Violence that go for this approach.  But what stands out the most is how well Bonded channel that old-school and modern edge, as tracks like “Je Suis Charlie” and “The Outer Rim” bring some hard rock edges alongside the metal and shake things up in the group’s favor.  Admittedly there are some lulls, as “No Cure For Life” and “Where Silence Reverberates” slow things down just a bit too much and make the middle of the album drag, but they recover shortly after and bring your attention back.  The production values are razor sharp and give the material enough weight to feel like it’s going to barrel through a wall while still allowing the nuances to shine through, and as a whole there’s a consistent appeal to what Bonded is capturing on this release.

Ingo Bajonczak handles vocals on Rest in Violence, and if you’ve heard the last two Assassin albums, you’re likely to find some similarities to his performance with Bonded.  Compared to his approach with the former Bajonczak’s pitch heads even lower, hitting growls and rawer singing that feels like its dragging you across gravel.  In some ways it comes through as closer to groove metal and Southern hard rock at times, with a little Testament thrown in for good measure.  This approach has always proven to be an acquired taste for metal fans, but if you’re like me and have always had a soft spot for this style throughout the 90s and 2000s then there will be plenty to like about what Rest in Violence has to offer.  It’s also worth mentioning that Bonded brought in Overkill’s Bobby “Blitz” Ellsworth on the title track, and the interplay between his unmistakable voice and Bajonczak’s super low ranges is infectious.

Despite a few songs not quite hitting the mark, the balance of old and new thrash styles on Bonded’s debut prove to be appealing.  Quite often when groups made up of veterans form they simply rekindle the ideas they wrote in decades past so it’s refreshing to see these guys branch out and head in a variety of different directions.  It does feel like the best is still to come, but given the high points there’s still plenty of reason to support this band now and see where they go from here.  Rest in Violence is available from Century Media Records.