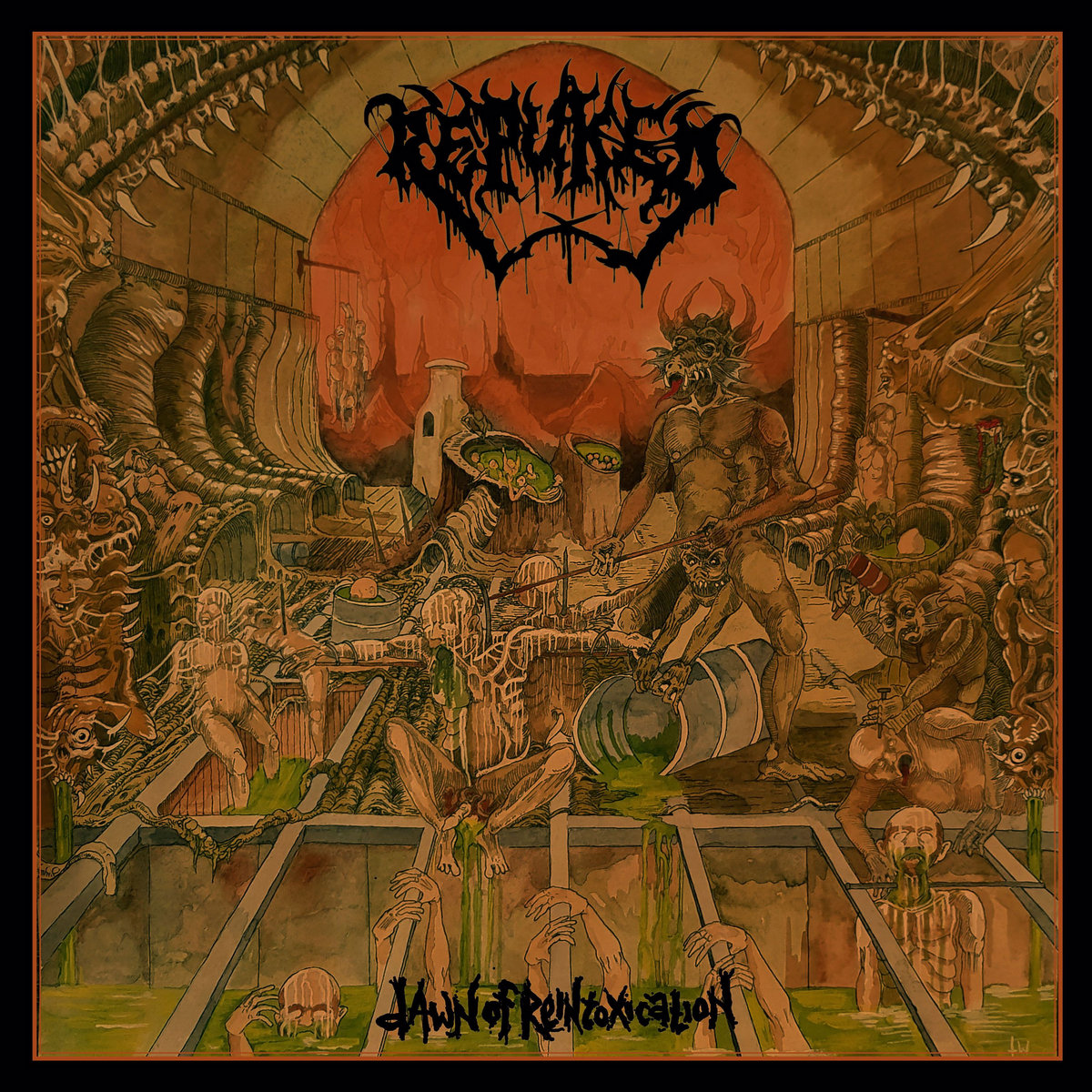 Sweden’s Repuked were fairly active throughout the early 2010s, bringing filthy Autopsy influenced death metal to listeners everywhere over the course of two full lengths and a few splits and EP’s.  That pace slowed down after 2013’s Up From the Sewers, as aside from a split with Bonesaw two years later the group remained quiet until now.  With their third album Dawn of Reintoxication it’s evident that the wait has been worth it though, as the band continues a blend of fast and rough-edged death metal alongside some slower songs where it sounds like there is sewer sludge pouring out of their instruments.  With gnarly production values and just the right amount of hooks woven into the raw intensity and pummeling instrumentation, Repuked have returned in a big way.

One of the biggest changes listeners will notice throughout Dawn of Reintoxication is just how damn heavy the instrumentals are.  While the band wasn’t lacking in distortion or murkiness on past recordings, each instrument has considerably more weight behind it and the guitar and bass tonality sounds somewhere between the buzz saw sound that tends to be associated with Swedish death metal and a bulldozer.  Songs like “Vodka til the Grave” are so bottom heavy that they feel like they could knock everything off the shelves in your home at higher volume, and this is exactly the type of sound that works perfectly for old-school death metal.  Stylistically Repuked once again channels a lot of Autopsy and other classic US and Swedish death metal bands, providing scorching solos and extremely fast paced passages that give way to much slower ones where it feels like you’re being pulled under a thick layer of sludge and grime.  But there’s a bit more variety to the songwriting than you might initially expect, with shorter numbers like “Kickfuck” giving off some grindcore vibes and the much lengthier tracks slowing things down to a death/doom type pace.  The title track even gives listeners a breather from the attack with some eerie synths that fit the 80s slasher and horror movie tones of the album perfectly.  Admittedly there are some moments that blend together over repeat listens and I’m not completely sold on the idea that closer ‘Morbid Obsessions” needed to stretch out to the nine-minute mark, but there’s a lot more substance to Dawn of Reintoxication when compared to your average death metal group.

The vocals are where Repuked layers in the filth and sleaze even further, offering up a wide variety of screams and growls that regularly switch things up.  It’s refreshing to hear just how many different pitches the band utilizes on both the high and low registers, as one of my common complaints about Swedish death metal is when the growls remain relatively static for an entire album.  Here you get different ranges on almost every songs, with extremely distorted gurgles that have some goregrind flair, traditional growls, and ear piercing high shrieks.  Sometimes there’s a slight punk feel to the performance as well, which feels appropriate seeing as the band is capturing some of the earlier days of the genre.  Woven in with the vocals are a wide range of horror movie samples and these suit the material well without coming taking up too much of the overall run-time.

Filthy, grime infested death metal will always be a win in my book, and this is exactly what Repuked are able to capture throughout their latest release.  While the two longer songs drag slightly and there are a few moments that come across as a bit too similar, these guys still manage to pack in more substance and catchier leads than the average Swedish death metal band that beats the same couple of ideas into the ground and that makes them well worth your time.  This is also a damn fun listen, and you can’t help but want to blare the likes of “Kickfuck” and “Vodka to the Grave” at max volume and piss off your neighbors.  Dawn of Reintoxication is available from Soulseller Records.