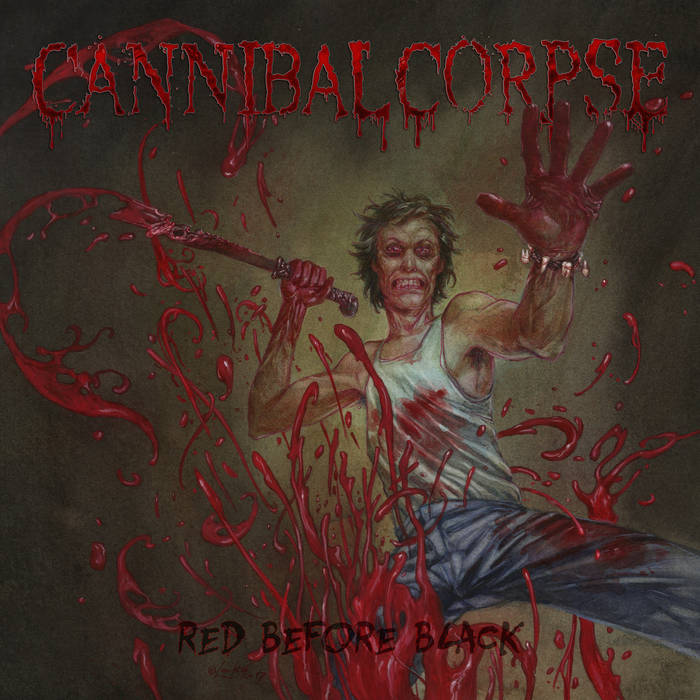 Red Before Black
by Cannibal Corpse

The Pitch: The 14th(!) album from the nearly 30 year old(!!) brutal death metal legends Cannibal Corpse through Metal Blade Records. "We're always looking for ways to move our sound forward while maintaining the style we've developed over the years," Webster states. "I think we managed to do that with 'Red Before Black' - it has some new ideas, but you'll also hear things on this album that would sound at home on our earlier releases. We want to grow as a band while staying true to our roots"

What I Like: This may be sacrilege in the eyes of the die-hard CC fans out there, but A Skeletal Domain very quickly became my favorite of the band's releases.  It's easy to see new output from Cannibal Corpse as business-as-usal minus the classic status of their early work, but that album felt like it finely honed all of the band's greatest strengths while incorporating some truly infectious melodeath riffs into the mix.  "FIRE UP THE CHAINSAWS!"  Holy crap, did I jam the hell out of that lead single.  But I digress.

Red Before Black feels like a continuation of that approach while also channeling a more raw aesthetic that defined their early works.  Even the scaled-back style and bloodiness of the album cover seems to hint at this.  Being a Metal Blade release, it's still a polished record, but they left a certain roughness to the edges.  The riffs are as strong as ever, again alternating between melodic and brutal approaches, though generally favoring the latter.  CC have done an excellent job creating great hooks that really stick in your mind as with "In the Midst of Ruin" among others.  "Scavenger Consuming Death" also has an absolutely disgusting, crunchy bass solo towards the end.  Rounded out with Corpsegrinder's ain't-broke-don't-fix-it gutterals, it's just a damn good time.

Critiques: It's weird.  I've never been in love with Corpsegrinder's delivery, but it's so critical to the band's sound that I would never ask him to change it either.  Some guest vocal spots might shuffle things up a bit.  Other than that, critics won't be wrong in saying that in this end, this is pretty much more of the same even if it is executed very well.

The Verdict: Following suit with a number of their longtime brutal cohorts of late, Red Before Black is another killer album that proves even if an old dog can't learn too many new tricks, they can still hold their own when it comes to the basics.  Buy it this Friday.

Flight's Fav's: Only One Will Die, Red Before Black, Scavenger Consuming Death