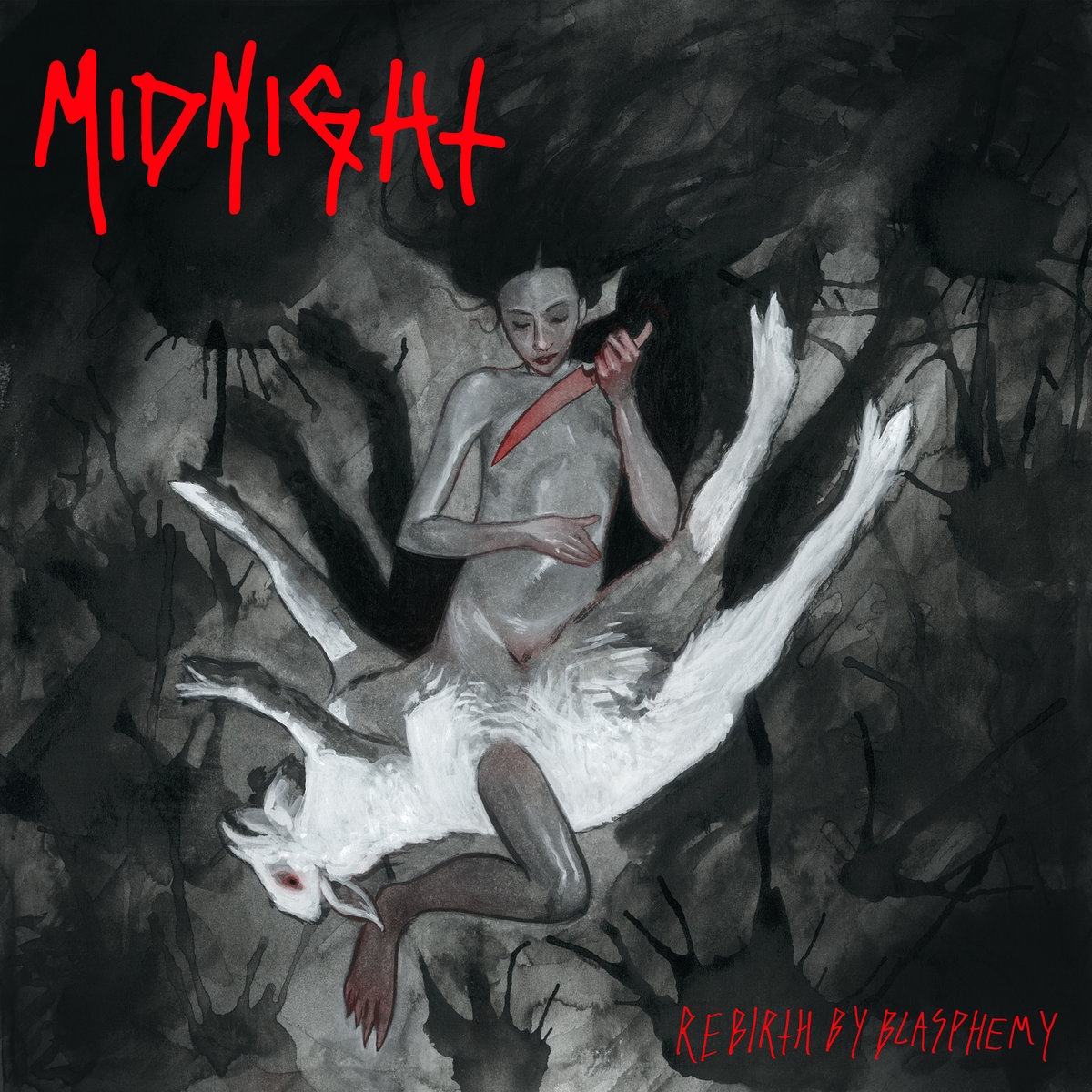 Rebirth by Blasphemy
by Midnight

Plenty of black ‘n roll bands would sprout up in recent years, but few have done the sound as well as Midnight have over the past seventeen years.  Formed as a solo project of Athenar back in 2003, the group has taken equal amounts of first wave black metal, NWOBHM, and rock ‘n roll and woven it into an infectious combination.  After being a fixture of the Hells Headbangers roster for years Midnight has made the jump over to Metal Blade with their fourth full-length Rebirth by Blasphemy, which retains the same type of hook driven songwriting but ups the production values.  It may not be reinventing the group’s tried and true style, but the album remains varied enough and hook filled to be another worthy effort for existing fans and newcomers alike.

What’s worked to Midnight’s advantage in the past is they keep things simple by boiling down first-wave black metal, rock ‘n roll, NWOBM, and D-beat into a mixture that grabs you with high energy riffs and catchy chorus lines.  This holds true once again on Rebirth by Blasphemy which comes flying out of the gate with a faster tempo and simple yet effective riffs that make you want to pump your fists in the air.  Compared to the group’s previous albums the production values have changed considerably, as everything sounds fuller and there is added clarity that allows each of the instruments to be more audible.  But despite this change, there’s still hints of rawness to the tonality to ensure that Midnight hasn’t lost their edge and this is especially evident during some of the fastest songs on the record which retain the same amount of fire and grit as anything on Satanic Royalty.  There’s also a bit more variation between tempo from one track to the next, and the shifts from black/speed metal into straight up rock ‘n roll that gives off a bit of The Hellacopters vibe on “The Sounds of Hell” prove to be infectious.  It still doesn’t hook me as consistently from beginning to end as Satanic Royalty did back in 2011, but this is the closest Athenar has come since by boiling the writing back to its essentials.

One of the defining elements of the band has been Athenar’s gritty and abrasive pitch which was as harsh as a scream yet enunciated so that you could make out each word with ease.  Where some of the other black ‘n roll and black/thrash bands that have followed in the years since Midnight’s inception have blurred together, it’s always been easy to tell when a song is from this band and the vocals play a large role in that.  On Rebirth by Blasphemy this is once again on full display, with the choruses providing plenty of catchy lyrics that I’m sure fans will be shouting along to at the band’s live shows.  The recording balances the vocals evenly with the instruments this time around, as Athenar is never drowned out but he doesn’t tower over the recording either.  It’s a mix that works to the group’s advantage, as it forces you to focus on both elements more so than before.

Some of Sweet Death and Ecstasy didn’t quite click with me back in 2017, but it’s follow-up has brought me back to singing Midnight’s praises all over again.  The writing’s been scaled back towards shorter tracks once again and boiled down to infectious choruses and catchy guitar leads, all while switching up the tempo often enough to make each one distinguishable from the last.  Satanic Royalty may still hold the title of Midnight’s best in my mind, but this album makes a case for being up there in the band’s discography and quite a few of the cuts are sure to remain fan favorites in their live set for years to come.  Rebirth by Blasphemy is available from Metal Blade Records.