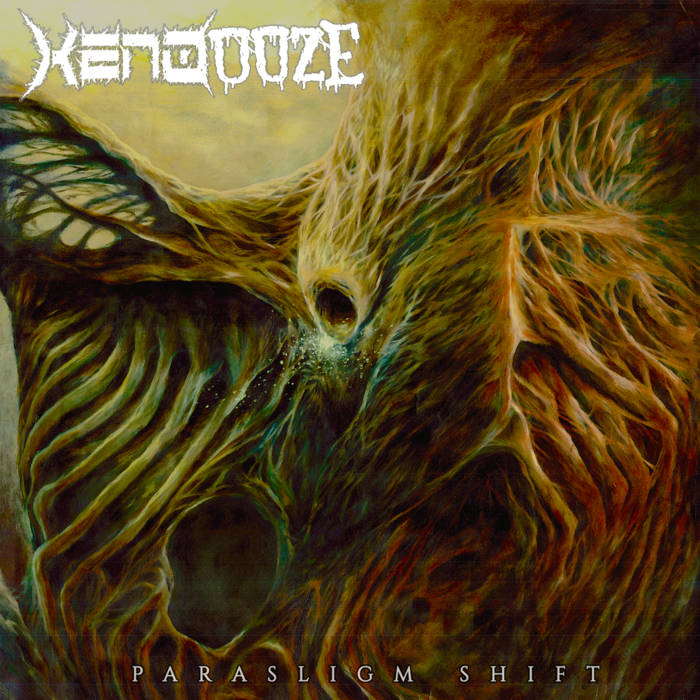 Grindcore was always a very 'hit-or-miss' type of genre for myself. So, when I first heard the collective works (or the two demo/EPs they have had available before this release) of independent Pheonix, Arizona trio Xeno Ooze, I was fairly stunned by the amount of experimentation and eclectic musical qualitites that the southwestern US modern outfit took on. There's a little bit of everything to be heard in here! This is a very new band and this is thus far their first full-length album, their eight track debut...so let's hear it.

There's a total of approximately 17-18 minutes of content on here if you count the bonus song, and most of this time is spent really pounding in the aggressive brutal deathgrind formula with some little moments of innovation here and there. The song lengths themselves are pretty mixed though. The opening track starts out with a pretty finnicky drum blast that goes into a proggy deathcore breakdown combined with Exhumed-like high/low growls and guttural vocals that contrast rather effectively along with the riff progression. The grind tremolos and blast beats continue on until the song hits a slow, sludgy point and the guitars go into a rather bendy break before topping the song off with some open note chugs. The second song 'Slime Against Humanity' feels more like a pretty standard grindcore track that mixes it up a bit with a somewhat catchy and melodic guitar solo in its centerpiece.

There are some slight hints of slam and oldschool death metal elements in some songs like the previously mentioned one as well as 'Wizard of Ooze', which is one of my personal faves as it's a lightning quick riff salad track with tons of Cannibal Corpse vibes with a hint of modern slam guitar lines and a moderately thrashy second half that ends off with a slammy-chromatic, toilet vocal finish. 'Grind // Splatter' is a filler track that's about a minute long and I only remember briefly because of the epic outro breakdown and pig squeals akin to MySpace-era deathcore. The next two songs, especially 'Destroy The Slopposition' (another fave due to the track title reminiscient of early Dying Fetus among other things), include some really hard-hittingly fast shredding and some quite destructive lyricism as well. The bonus track is another I have to mention because of how the electronic instrumentals (you have to listen to it to know what I mean) combine with the brutal slams, gutturals and song structure to form a pretty interesting and 'out-there' extra addition to this release. It stands out for this very reason and I found it one of the stronger songs in the end.

This little release shows off many grind infused elements that you'd expect to hear from an Insect Warfare/Cephalic Carnage-esque artist. Unsurprisingly, the flow is insanely swift moving and there are some sections that border on being slightly eclectic through some questionable instrumental parts. Here you'll find brutal slams and chuggy breakdowns of varying degrees, song structures that are grindy, yet unorthodoxical with their techy backbone, and some fairly outstanding innovative factors put into a condensed running time. If you couldn't already tell, I'm somewhat excited about this new project and hyped to hear what they might have in store for us in future (hopefully longer) releases as well. It's an above average first outing as far as the genre is concerned.

Fave Tracks: 'Wizard of Ooze', 'Destroy The Slopposition', 'Buried by Slime and Dust'

**This release is available now here on multiple formats including digital, CD & even cassette tape!!**