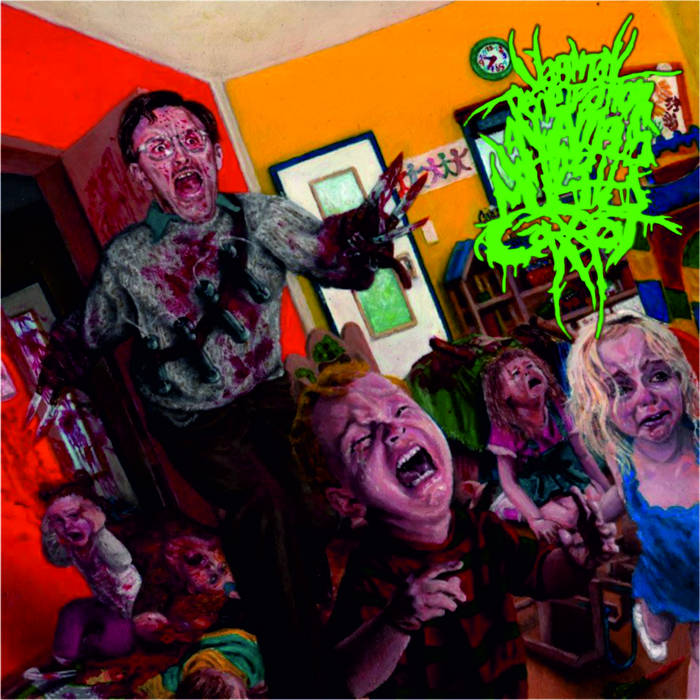 An unusual collection of slammy, grind and brutal sounds that come together for about ten minutes of dumb fun

Austrian Dukes of Derangement
by VxPxOxAxAxWxAxMxC

VxPxOxAxAxWxAxMxC or however you say their name, stand as a testament to the idea that, no matter how crazy you think heavy or brutal music can get, there is always someone or something out there willing to one up that idea and be even more insane. Born rather prematurely and bred in the regions of northern Austria, this somewhat new and obscure project (whose members are also prominent members of a few other death metal acts in the area and use names of known Austrian serial killers as their stage names) combines subtle elements of slamming death, even including guest vocals from Japan's own Traumatomy, with grind squeals and song structures in addition to some hardcore riffs and more experimental stuff thrown in, as well. The new album, or EP rather, given its brief length, aptly titled Austrian Dukes of Derangement, puts together five tracks of brutally dumb, yet interesting fun courtesy of the underground Xenokorp label. So let's dig in and hear what we have here in store for us today.

Now I know I've mentioned that there is a total of five tracks of content to listen to; however, one of those songs is a cover of an older goregrind/pornogrind song by French grind legends GRONIBARD, and another is just an instrumental rendition of a previous track that, oddly but interestingly enough, includes guest vocals by another local band via a contest that was conducted by this band. So really there's three original songs, a cover and an instrumental track to enjoy here. Despite that, I right off the bat liked the inclusion of the Traumatomy guest vocals on the first song that come on towards the end and those, along with the overall slam instrumentation and ambiance, got my attention really early on. There are more brutal death type vox on this song in particular than those of the pornogrind variety, which sets it apart from the other songs on this EP (more like traditional slam death than say, the likes of Rompeprop or Gutalax, which are the usual vox throughout this release).

But the point I'm making about this release is that each track on it has something that helps it stick out in some way. For example, there are some pretty cool percussion patterns, which are fairly hard to explain since I'm not sure what the instruments exactly entail, on 'Gastrointestinal Haemmorhage Banger', as well as some catchy deathcore-esque breakdown chug riffs here and there. Another song later on has a mix of hardcore tones and comedic elements with the vocals, and the cover track is hit or miss for me, since I'm not familiar with the original song at all. It was alright and pretty much fit in with the second song in terms of the goregrind themes. The outro song is just an instrumental track of a previous one, so not much to say about that. So there are some memorable moments on this release overall, and, despite the short running time and awkward sections all around, there is some dumb fun to be had here because of those brief, avant-garde or just plain corny moments.

To sum up the new EP Austrian Dukes of Derangement in just one statement is somewhat tough, since there's a whole lot about it that stands out from the rest and that makes it really unique in its own ways. However, the release ultimately represents an unusual and often experimental collection of brutal sounds that combine elements of slam, grind and core varieties into one short, but oddly sweet and sour at the same time release. This one's got those eclectic brutal riffs and mixed vox because of all the guest spots, and those are a couple things I really liked about it. Sure there are things I didn't really care for, but in general, I liked the ten or so minutes I've spent with this release. It's not that great or that much of content, but it's still a fun breath of fresh air if you're into stuff like the collective works of Gutalax or Traumatomy with a hint of core-like substance in between. If you're a fan of the odd side of brutal death or grind, then check this one out!

Fave Track: 'Against Humans, Against Animals, Against Everything'