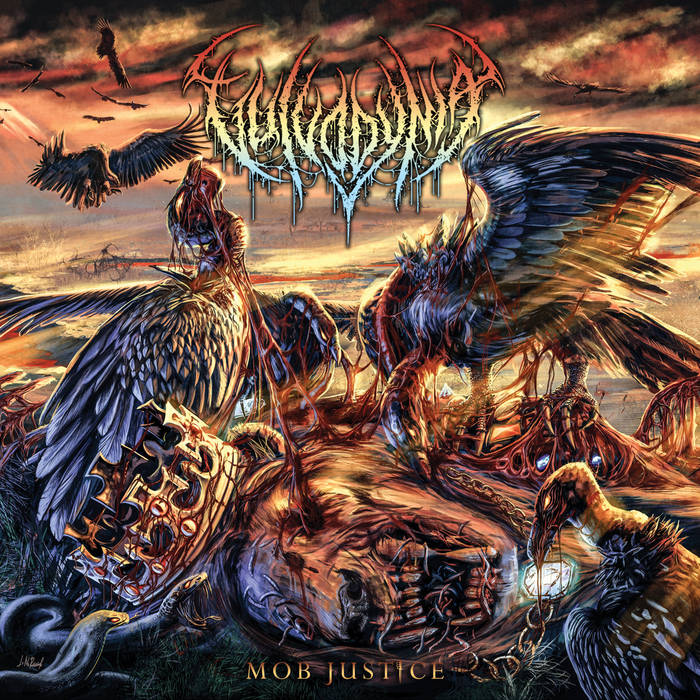 Vulvodynia has been the manufacturer and supplier of some of the world's most brutal and/or slammiest tunes since the day of their inception a little over five years ago now. This fairly noteworthy five piece of South African death metallers truly made somewhat of a mark on the respective genre through the several releases they've put out over the years under a number of different labels, no less. And now, they're back with a vengeance with what is their third full-length (and seventh overall release) to date. Let's see what they're on about now!

The release that marks the band's three year album return and one that serves as a follow-up to Vulvodynia's also very recent three song EP titled Anthropophagus (unveiled within the same year, mind you), Mob Justice carries over a ton of the band's previous influences and characteristics and proceeds to wrap them up all together into a fairly decently structured, if mostly incoherent from a vocal standpoint, third album.

Despite the toning down in guest spots this time around, there are still some destructive surprises and brutal fun to be had here. The album is released via Lacerated Enemy Records once again on multiple formats (digital, various vinyl, CD) and features ten crushing tracks that were, interestingly enough, mixed by Andrew Zink (Into Infernus, Brojob) & Connor Reibling as well as including mastering work by Yannick St. Amand (Despised Icon).

Mob Justice opens up with the rather usual intro/build-up track in the form of 'Feast', which, despite its title, doesn't give us, the listeners, much to digest or go by. It serves more as a building block that leads to the real first MVP song 'Mob Justice'. 'Mob Justice' feels much more like a typical slamcore song in the vein of Ingested and of course Vulvodynia. The slams come bursting right in from the getgo and Duncan Bentley soon storms in with a raging fury of both high, almost 'fry'-like vocals in addition to the usual gutturals. The song goes into a pretty interesting bridge before going back to the chromatic riffs (albeit slowed down to a sort of breakdown) to finish it off.

I have to say that one thing I wish the band brought back was the trendy, yet memorable bass lines/tone that was present in the previous full-length. Those fills and slaps were a pretty fun and catchy part of Psychosadistic Design, I thought. Nevertheless, the production quality itself is still top tier and there are three guest vocal spots total on this album: one courtesy of Trevor Strnad (The Black Dahlia Murder), one oddly and unexpectedly enough from Martin Matousek (Gutalax), and the third being by Alex Taylor (Malevolence). Overall from these, I'd have to say that the Gutalax one was my personal fave due to how out of nowhere it was and how hard it goes with the pig squeal-goregrind vocals that somehow kinda fit in well. Trevor's addition was still fairly solid due to his incredible build-up and melodic energy and I'm never one to pass up a Malevolence drop.

Anyway, as far as the songs go, 'Blood Diamond' is a straightforward yet fairly decent brutal death track with lots of doom-ey slams, some alright hardcore vocals towards the middle point and topped off with a guitar solo near the outro while 'Born Into Filth' is mostly worth checking out for the Malevolence vocal guest spot alone. 'Famine' is a slight filler in feel, though it does assert its own identity through the insane aliencore-esque riffs it has on display later on. 'Nyaope' is my fave song due to the aforementioned guest spot by Gutalax as well as a lot of the vocal progression, variety and slammy goodness in between. 'Reclaim The Crown Part I' has that similar vibe, being the greater of the two-parter track(s), and also has a somewhat melodic/blackened feel with how the vocals and guitars blend together. The remaining songs not mentioned here are kind of "take-or-leave" since I didn't really have much to discuss about them that was outwardly memorable. Still more hits than misses on Mob Justice, though.

As a closing statement to all of this, Vulvodynia are still at the top of their game in many ways despite the innovation draught associated with their chosen slamcore genre. Mob Justice had just enough decent slams, notable guest spot features and some added surprises thrown in to keep my interest for about 85-90% of the time. Sure, some of it might feel recycled at times and the general sound is all too familiar, but, given the amount of energy and charisma to it, this release still makes for a brutally slamming good time from start to finish if you're at all a fan of the genre itself or the band's past works.

For Fans Of: Acrania, Ingested, Vulvodynia