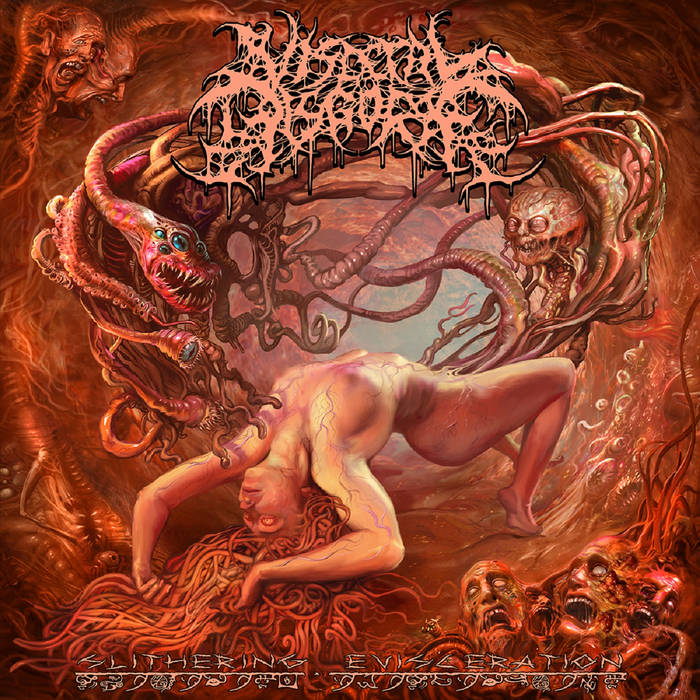 Visceral Disgorge may or may not be a household name for those who've been following the new age wave of slam and technical brutal death these days. They have rather the humble cult following, though there's been also a lengthy hiatus between releases for the Maryland-based metallers. Be that as it may, the brutal Baltimore quintet has come up with a follow-up to their acclaimed underground 2011 opus Ingesting Putridity. Following countless live show appearances as well as the untimely and tragic passing of one of their band members Steve Rosenzweig (R.I.P 2014); the band has seemingly made a comeback this year. Now let us see if the wait was truly worth it...

Serving as the long-awaited and highly anticipated return of Visceral Disgorge since the artists' 2011 full-length debut, Slithering Evisceration is a shorter and more subtle, yet somewhat more brutal at the same time type of release. The album duration feels more slam-like as opposed to their overly fleshed out debut and there seems to be a greater focus on shorter track lengths that incorporate more matured and aged "like fine wine" kind of elements and riffs, too. Nevertheless, the new Agonia Records release is out now on multiple formats and contains around half an hour of content packed into nine tracks.

The opening title track begins with some ominous,UFO-esque hovering atmosphere that soon enough turns into some power chord guitar riffs and a roaring intro before 'F**ked Into Oblivion' takes the stage over. I've also noticed that the production quality on this album doesn't really sound up to par with its predecessor, with it giving off a mostly Pathology(Huber era)xDefeated Sanity vibe in terms of the siren like sewage drain vocals and constant slamming rhythm over techy guitar fills and fast riffs. The sound mixes up a bit throughout, but the slam formula of the previous album is still there. There is more of a raw feel on here, though I wish the song structures were as fleshed out and matured as in Ingesting Putridity.

There is much less emphasis on the slamming breakdowns this time around, with a technical brutal death forefront being emphasized in songs like 'Architects of Warping Flesh, especially when it comes to the track's outro and guitar lines. 'Saprogenic Deformation' however feels probably the closest to what the sound in the previous album was with the way the instrumentals flow. I thought the monster vocals on the other album were also more remarkable as opposed to the low-end ones on this release. The following few songs are more of the same and 'Necrotic Biogenesis' wasn't my cup of tea aside from the comical audio sample. Slithering Evisceration tops it off with a hard-hitting outro track, though, that I honestly wish was longer, instead opting for an extended silence ending deal type of thing.

Visceral Disgorge's newest outing is far from memorable on a lot of fronts. It plays off on the usual slam formula with a hint of technicality here and there, which I enjoyed much more on the debut. At the end of the day, when it comes to the overall length of time we had to wait for this release to drop and for the band to make a comeback, this one is ultimately pretty disappointing and lacks many of the moments that made Ingesting Putridity a blast to listen to. The sound is different and the vocals feel less brutal. Instrumentals here are pretty hit-or-miss, as well. Not sure if I'll listen to this one again anytime soon; but, for the fans who've been waiting forever for this one to drop as well as the newcomers, I'd say go for it and listen at least once, the new sound might be a breath of fresh air for some. For me, however, I think I'll just stick to the first one.

For Fans Of: Condemned, Pathology