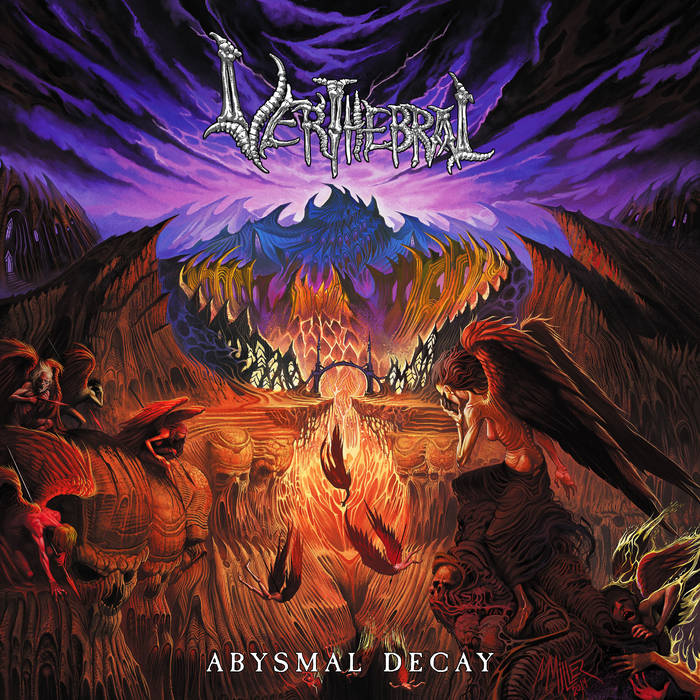 Another day, another death metal album to review. And what better way to follow up than to continue the theme of looking at and analyzing bands from other parts of the globe, namely in South America this time around. We've previously had Brazil's mystifying Depressed, now put your hands together and get ready for the almighty Verthebral. Hailing from Paraguay, this Transcending Obscurity-signed misanthropic and death-obsessed four piece outfit has been at it for a little over half a decade now. Today's release titled Abysmal Decay (sort of cliche and edgy, but I can dig it!) serves as a continuation of the band's somewhat experimental blackened death formula that was initially established within their 2017 full-length debut Regeneration. Notably, this new ten track effort offers over forty minutes of brutal content, with artwork by Marcos Miller, who has worked with other artists such as Decimator in the past, in addition to sporting layout courtesy of Finland's very own Turkka Rantanen (Demilich). So let's get right down to it.

Right off the bat, this release blew me away in terms of the riff variety and song structure aspects. Some tracks are fairly short, with one short filler track consisting of an instrumental that I honestly could've done without, and others are drawn out, such as 'The Art of Perversion', which features possibly my fave intermission section, melodics and breakdown of the entire album; in addition to 'Sweet Home Illusion': a song that is packed with lightning paced tremolo riff patterns, fine blast beats, some chromatic/slam-esque parts and a guitar solo here and there. Which brings me to another trait of this album that helped bring me to the edge of my seat during my initial listen...the abundant and copious amounts of guitar solos scattered throughout. Sure, a lot of them begin to blend after a while, but they really put a blasting vibe that made me want to bang my head endlessly. Many of these are also well-placed and not used too excessively, in my personal opinion, opting for one or two per song.

In terms of the vocals, they have a kinda blackened death vibe akin to Deicide or Mystifier if you recall that one. The instrumental variety, though, I felt could've been closer to the latter, as those melodic instrumental sections that are present in a few parts of this release lacked in frequency, which is something I thought could've been used more to the band's advantage here. The transition that occurs in the second track on the album really caught me by surprise in the best of ways and gave off some melodic and atmospheric beauty in the overall chaotic death metal dissonance throughout. I also got some more techy vibes at times in relation to the guitars, but they generally didn't last long aside from a couple parts in songs like 'Coronation of Envy', which has a kickass oldschool Dying Fetus sorta feel to it, I thought. And the album, aside from one or two hiccups regarding drum samples, is very competently produced throughout. The very oldschool death metal solos and vocals shine through in songs like 'Absence of a God' and the outro track, whilst slight moments of innovation are present in some parts, as well. Check this one out for those aspects alone, it will be greatly worth your time.

Myself being an oldschool death metal fan, I had a blast with most songs on this album. And, even on its downtime, there were some semblances of merit to be heard through the clean acoustics or general ambiance that put me in somewhat of a trance during certain parts of the album as well. The production feels either a bit dated or just a tad raw, which can be hit or miss for some; however, the overall hectic nature of the guitar riffs and specifically solos (which are some of the strongest aspects of this release) as well as the blast beats and nostalgic vocals that have a sort of grimy feel to them came together in a mixture of thrilling death metal fun to be had, with some melodic, progressive and even somewhat blackened elements to be found here and there. A very solid second effort, to say the very least.

For Fans Of: Autopsy, Carcass, Mystifier