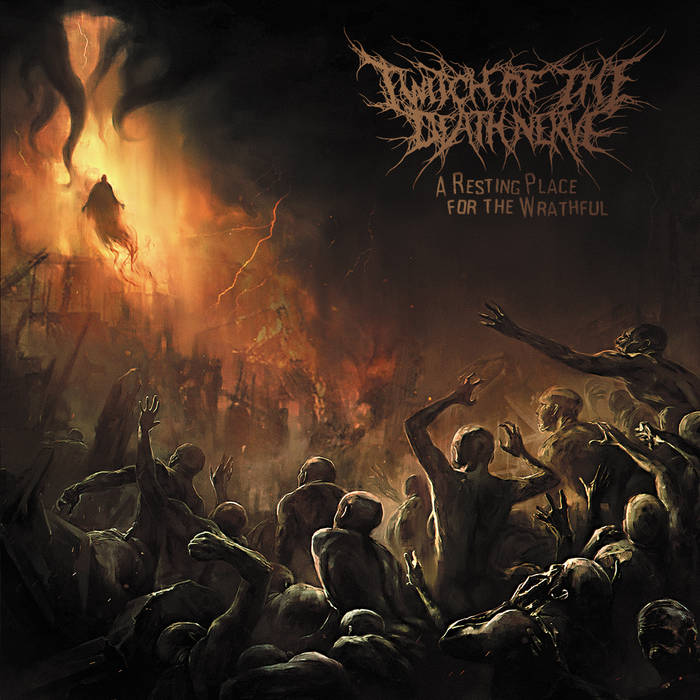 Raffy Reviews - Twitch of the Death Nerve: 'A Resting Place for the Wrathful'

Twitch of the Death Nerve is just one of those brutallic deathgrindy bands that shows off the capability of the UK's many obscure local acts within the realm of...well, brutal, heavy and often controversial music. The underground trio project has been on the scene since the mid-2000s, though they've been fairly inactive for about a decade following the release of a split CD. However, this London-based band of brutal enthusiasts have made themselves known once again in 2014 with the release of their debut album A New Code of Morality. And now, they're unleashing upon us all the destructive dissonance that comes in the form of their latest EP titled A Resting Place for the Wrathful: a 26 minute effort comprised of eight tracks of the same ole brutal deathgrind speed, squealing high pitched interchanging vox, and techy yet unconventional instrumentals that we've heard in their previous offering. This one's available now via Comatose Records so let's see how it is!

The self-titled intro track warms up with some open low distortion chord riffery mixed in with a toilet vocal squeal and some random audio sample from a horror film or something. Get used to hearing these, because they come up several times throughout this eight song effort in between the madness to act as ominous little interludes. Sometimes they work here, but I felt as though they were a bit overused at times or overlong like in one later track. I still really enjoy the slams that come up like in the first two tracks, especially in the climax of 'Ochlocratic Prostration' before it goes into a break followed by more fast grind riffs. There could've been more of these slam sections in the outro portions of certain songs, but I still thought they did their job well. Some subtle bass lines show up here and there, which add a nice background touch to the lightning paced slam riffs and deathgrind percussions, which have those odd snare samples that give off that low-fi feel. The vox go lighter on the squeals this time around and one song is re-recorded from the debut, though I felt as though the original recording was superior in a few ways. Overall, I really enjoyed the first few tracks as well as the final song called 'Promulgation of Infected Innards' for its tremolo/slam mixture and somewhat melodic finish. A couple of the other tracks I could take or leave, though.

Although the production quality is on the lighter side and this release is quite a tad more condensed in duration than the previous effort, I still enjoyed it for the fact that it managed to recapture the same aesthetics as well as the similar song progressions, themes and overall sounds that could be found in the debut full-length. From the low-fi sounding drums to the lightning paced mix of brutal death slams and even faster grind tremolos, the usage of horror/thriller-themed audio samples and, of course, the somewhat eclectic vox consisting of low gutturals, squeals and shrieks of terror, it really has that proper deathgrind energy that a fan of say oldschool Defeated Sanity, the more grindy side of Circle of Dead Children, or the collective works of slam's Angel Ochoa (i.e. Condemned, Disgorge) would be inclined to like. All in all, it ain't as much in terms of quantity or production, but there's still a lot of spirit and energy to admire.

**This release is available both digitally and physically now here!**