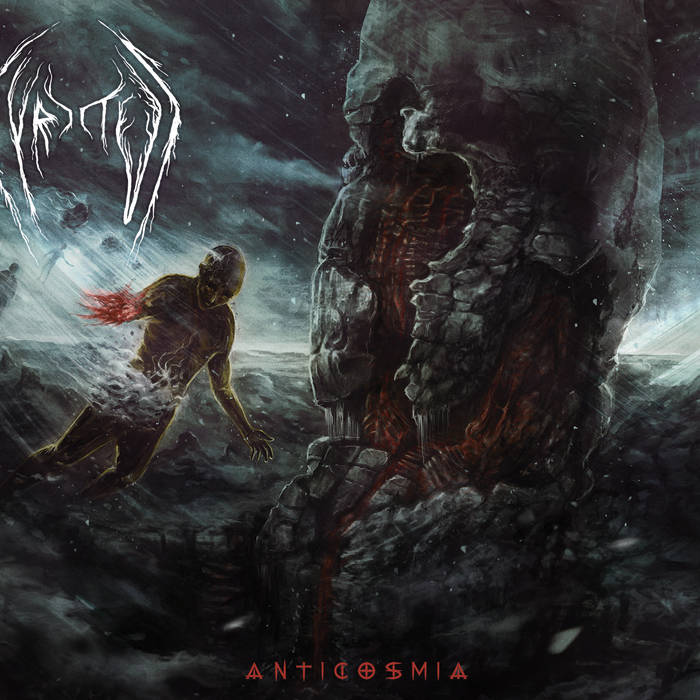 I'm going to start off this review by saying that I wish there were more of these intruiging single member extreme projects out there for us to talk about on here. Since, thus far, pretty much all the ones we've heard have blown us away in one way or another. Syrictus is the brainchild of Milwaukee, Wisconsin-based death metal DIY artist Erik Stenglein who started the project back in 2017. The artist discusses elements related to extraterrestrials and the paranormal in much of his material...and he's so far released one other EP aside from this full length album. Let's see what it's all about.

Anticosmia serves as the title for Syrictus' debut full length release, which came out late February of 2019 independently via the musician (digitally & CD) in addition to a cassette tape release through Night Rhythms Records. It consists of ten brutal tracks culminating into about an entire hour of death metal nonstop content. Everything was written and composed by Stenglein himself, with the mixing/mastering being conducted by William Jay Smith. And, going by this album's cover artwork, I'd say we're in for one hell of a heavy ride.

It all starts off with a rather longwinded audio sample to set off the mood. The ominous messages in the sample allude to the brutality of what's to come. Soon enough, listeners are introduced to blast beat drumming and chromatic guitar riffs that take shape, along with some rough, yet addicting vocals. They're honestly pretty standard growls, but for some reason they remind me of other, more oldschool bands I enjoy like Dying Fetus, Internal Bleeding and such. For the most part, the drumming becomes haphazard and sounds a little off at times (which may just be due to the production quality or mix), but you kind of get used to it as it becomes a staple of this record's somewhat unique sound.

I also have to say, the riffs on here are pretty great; and I have to give this guy props for tying it all together. The opening track 'Acamar' is the album's shortest, with every other track being anywhere from four to ten mins in length. 'Dawn of the Serpent's Vice', the album's following song, happens to be one of my personal faves because of its chromatic 'slamming' riffage, melodic guitar solos and crazy outro breakdown. 'Grey Echelon' is more of a riff salad track that's insanely fast-paced and demented. I felt a lot of raw energy in this one and the structuring was pretty sweet. Sometimes there'll be some guitar effects thrown in to add more depth and atmosphere to the music, which is what happens near the end of this track. I will also say that, despite many of the guitar solos being really cool sounding, some of them feel a bit forced or out-of-place for my liking.

'Destacatlya' is a song that's ridden with brutal death action in the first half and becomes a more ambient and melodic experience in the latter section. Not my cup of tea, but it's definitely one that's different and sticks out on Anticosmia. The audio samples are used throughout, but sparingly as well. A couple of more tracks that I really have to give praise to are 'The Chaos Ingurgitant' for its lightning pacing and energy and, of course, 'Demonwarp' (the ten minute song), due to it being so incredibly fleshed out and unpredictable. 'Demonwarp' begins with some eerie narration that soon goes into distorted chords and some instrumental madness in the form of consistent blast beat drumming, vocal variety, and riffs for days. The song notably finishes off with a clean outro, as well.

All in all, I've said quite a bit about Anticosmia and, to sum it all up, it's surely an album that's worth listening to regularly if you're into brutal death metal with some melodic or technical little nuances thrown in. It's one of the better albums I've heard in a minute and, despite its little mixing mishaps or faults/inconsistencies here and there, Anticosmia still stands as an unapologetically heavy and out there release for its solid riffs, rough but memorable vocals, song structures and more.

For Fans Of: Some brutal one-man death metal music