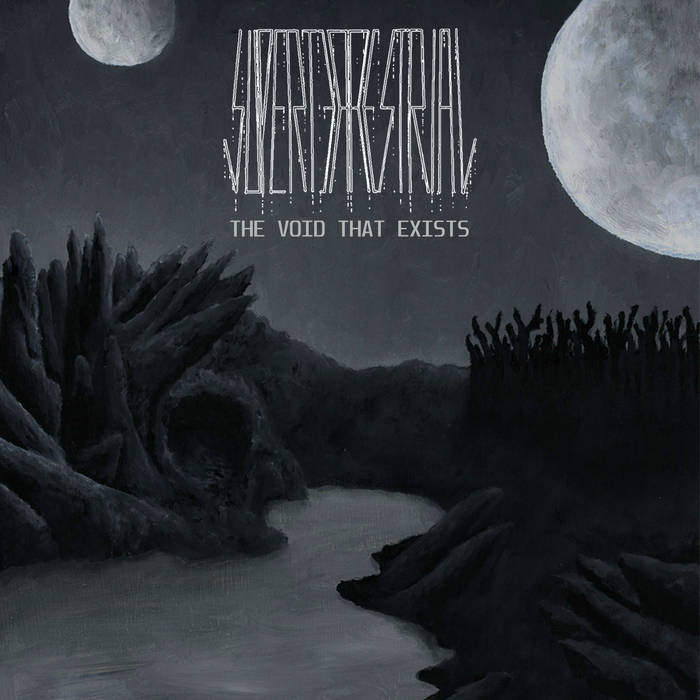 A somewhat stellarly ambitious blackened release that has promise, but falls flat on certain aspects

The Void That Exists
by Superterrestrial

Right off the bat, I'm just going to go on record and be brutally honest by saying that, although there are a lot of things I enjoy about the black metal genre, there are also some traits about it I don't particularly care for (some of which are relevant to the review at hand). But for now let's get the train rolling and introduce today's artist(s) and subject: Superterrestrial. After doing some digging prior to writing this up, I oddly enough couldn't find out much about these folk on social media aside from the fact that, according to their promoter and label's Bandcamp, they're a Crawley, UK-based black metal four piece project that writes metal music with themes surrounding space; the final frontier. Thus far, the band has put out two releases...the latter of which is the topic at hand.

Serving as a follow-up to Superterrestrial's debut album from last year, The Void That Exists (which is listed as an EP on Metal Archives for some odd reason despite the release being slightly longer than its predecessor in length) is a seven song sophomore release for the UK band that once again explores the concept of space and cosmology, as its album cover and title suggests. Moreover, the album is now available to the public both digitally and on physical format by way of the dated, but trendy and delectable niche cassette tape via Green Flaw Productions.

To get into a more lighter, high note, I have to give praise to the innovative instrumental melodies, mainly with the John Carpenter & Wolves in the Throne Room/Harakiri For The Sky inspired synth as well as ambiance breaks here and there. Though they might get overwhelmingly frequent after a while, I thought they were effective for the most part. Additionally, I'm sure there is a ton of great lyricism at play here aside from the powerful guitar tones, which perform mostly lightning fast tremolos as well as some droning open riffs. The drums are pretty solid, as well. The longer tracks like the outro composition (which is over 10 minutes in length) are my faves because of how much they cram in and the level of ambition when it comes down to the energetic chaos of the heavy, blackened verses juxtaposed with the occasional slower parts.

However, that is where the compliments end, unfortunately. There are faults to mention throughout: particularly with the vocal aspect, which is handled by two of the band members; in addition to the haphazard production/mix and sometimes uneven song structure. For instance, while the intro song seems more balanced in those aspects, other, later tracks such as 'Collapsar' and 'Aphelion' feel like they have an identity crisis at times. As far as the album as a whole goes, I can say that I enjoyed slightly more songs than I didn't care for, particularly in the very beginning and towards the release's ending. 'Tidal Disruption Event' is one song in particular that gets the mixture just right and starts off with a low-fi synth pattern accompanied by thrashy guitar riffs that soon enough go into a raging black metal verse. It's generally a longer song that also includes some core breakdowns and, of course, an intermission break before going back into the Immortal-esque madness. The outro track also has a similar formula, though it's overly lengthy and includes a few different melodic sections in between.

The rest of the songs are kind of hit-or-miss in the sense that they have things that I like as well as material I do not. A mixed bag, if you will. For example, I enjoy 'Bok Globule''s phenomenal (in my opinion) guitarwork and vocals, which are the strongest of the entire album; however, this track also happens to include an overly long and drawn-out intro that doesn't really add much to the music itself. Also, 'Heliacal Rising' is a mess of a song in terms of structure and pacing but it's also one of the heaviest and most instrumentally technical.

At the end of the day, while there are issues I've had with this new album, there are also some factors related to it that I can say I enjoyed, as well to an extent. There are some cool background melodies and hauntingly daunting/over-the-top guitar riffs that really caught my attention whenever the music got really heavy. The more atmospheric sections are pretty soothing in a way, though some of them could've been cut out. But overall, this is a flawed but interestingly put together release with quite a bit of promise, namely in the instrumental department. The themes are rather stellar (pun intended) as are the sprawling blackened aspects throughout. There is promise to be heard; though, some of it is overshadowed by faulty or uneven production in addition to lacking vocal variety and structure, which killed the vibe for me at times. Maybe that's what the artists were going for, maybe this one is just not for me and not my cup of tea. But, for the time being, I can only say that while I didn't fully enjoy it as much as I hoped to, there are a lot of other modern black metal-heads who are into the more kvlt/atmospheric side of the genre out there who may surely see this one differently than I and potentially have a blast with it. So if you fit the aforementioned descriptor, I can only tell you to give it a shot and hear it for yourself.

For Fans Of: Batushka, Deafheaven, Nightgrave