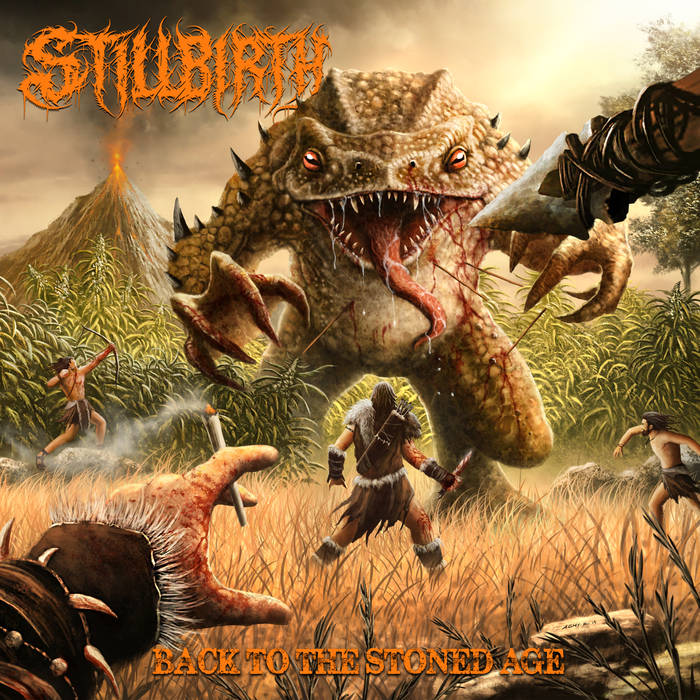 Raffy Reviews - Stillbirth: 'Back To The Stoned Age'

Back To The Stoned Age
by Stillbirth

Stillbirth is a band that we've covered on the site before a while back. With their corny, but heavy and great album Annihilation of Mankind behind them, they're taking their sweet time to look back on their musical career. With that, a retrospective remastered release is upon us now...and the band's comical graces, marijuana-laced and party-themed lyricism coupled with their brutal slamming riffs and out there gutturals are being brought back to light once again in their sixth full-length since their late 1990s inception (which also happens to double as a "greatest hits" record, nice!). Is it worth the price of admission; should you listen to it yourself? Let's find out!

A thirteen track compilation of the artists' earlier material spanning five albums and two decades: Back To The Stoned Age is finally born and bred with newfound hilarity in the midst, as one could easily judge by the ridiculous album artwork. This nearly forty minute composition includes rerecordings with the newer line-up, as well as introduction of a couple new, unheard songs in addition to there being guest vocal/instrumental spots in most of the songs on here from other artists within the BDM scene. The album was also released through the band itself independently very recently on multiple formats.

The intro song 'Riot 2.0' starts out on kind of a chuggy deathcore vibe complete with open note breakdowns and vile toilet-esque gutturals you'd expect from these dudes. The sound soon turns into a more fast-paced Waking The Cadaver type of vibe with how the vocals go into squeal/"shredded wheeeeat" mode and the breakdowns soon turn into more bold slamming riffs. Most of the songs on here are fairly short (keep in mind I haven't listened to very many of these tracks before originally, so I'm judging this release on its own merits for the most part) and the switch between the band's signature low gutturals to the high-pitched screeching backing vocals is something I always wished they experimented more with.

The following song is a pretty standard Stillbirth brutal death song with some techy elements in the spontaneous guitar work. The guest vocals by Vivien Rue (Embrace Your Punishment) are something I really enjoyed and thought added quite a bit to the song's overall vibes. Also, the "SHOOT!" gang vocal line towards the end was pretty funny. I don't have much to say about the following song except for the fact that I like the galloping main riff and the double bass that comes in during the pig squeals. However, 'Human Parasite 2.0' is one song I liked for the thrashy feel in the first half that turns more slammy later on; also, more toilet vocals and hilarity ensues. 'Chainsaw vs. Face 2.0' is a very brief minute-long song that oddly enough has a kick-ass vocal duel between the main guttural guy & the guest vocalist. This filler track may be an annoying throwaway for some but it had a nice kick to it for me. 'Beating Pacifists 2.0' is another longer track that really shines in that regard, with the Extermination Dismemberment guest spot taking the stage near the end (I just wish there were some bass drops though).

One aspect of this release that I personally thought was a missed opportunity were the more techy or proggy elements introduced in much later songs on Back To The Stoned Age such as 'Legalize It' (AKA the new/unheard track). There is a certain interesting section that comes in unannounced and out-of-the-blue and gives off some eclectic vibes with how the instrumentals go, but it's not built upon in any way and the music just goes back to the usual partycore/BDM stuff, which I thought was a bit of a bummer. Also, I read up that this release supposedly has two bassists on it, which is intriguing and thought more could've been done with that as well. In all, though, with songs like 'Open Up This Fkn Pit 2.0', 'Beating Pacifists 2.0', 'Global Error 2.0' (in my opinion a better version than the original I heard years back), and the fleshed out remake 'On The Edge of Society 2.0', you really can't go wrong if you're a fan of the band and if you're new then there is quite a bit of slammy, guttural, corny fun to be had here and there. Some songs are fillers and others kinda drag, such as a few of the ones towards the ending; however, this remade full-length is something I can really get behind and appreciate for its weird vibes.

Although this "new" full-length release is just another enhanced remaster compiled of older material and doesn't necessarily offer much of anything new for fans discounting the added guest spots in addition to the one or two newer songs, it's still a ton of fun from front to back with only a little bit of filler or dragging on at points. Check it out for yourself if you're looking for something a little odd or out-there and don't mind your brutal death with quite a bit of gutturals/pig squeals and some breakdowns here and there. It's Stillbirth partycore/slamming brutal death at its very core and that's all that matters here in the end.