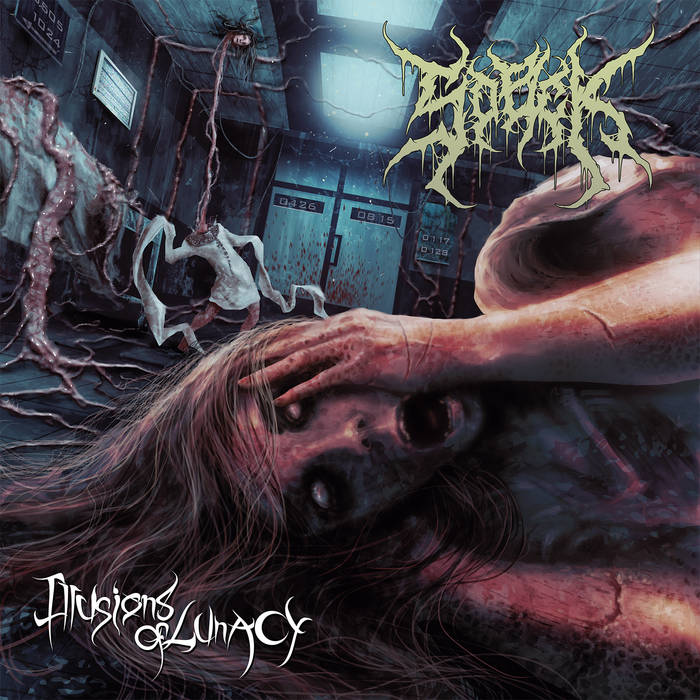 Illusions of Lunacy
by Sobek

Birthed heavily straight from the ashy remnants of those who've created brutal efforts with the likes of classics such as Cephalotripsy, Disgorge, Gortuary, & Six Feet Under, this American death metal outfit really is no joke. Sobek stands tall as a follow-up to all the heaviness, gory-ness and cutting edge destruction that's come out of labels like Russia's own Lords of the Sick Recordings. And, while the band is a very new project (this one being a debut release), I've had a lot of high hopes for Illusions of Lunacy given the nature and background of the musicians involved. Additionally, this five song EP is now available digitally as well as on physical CD format now!

'The Appalling' starts off this album on a rather high note with some classical orchestra instrumentations that soon enough lead to quality power chord riffing in the vein of melodeath before turning completely bleak. The cheesy, gurgly slam gutturals take form and the open note chugs and slams come in before making another round with the intro riff. The Condemned style vocals courtesy of Angel Ochoa really had me hooked...and the blast beats kept an odd sort of chaotic rhythm, if that makes any remote sense at all.

There are even some melodies throughout this release that reminded me of Ochoa's past projects. And, although the slam musicians are present on here, the slams are used very, VERY sparingly so if you're in it for those alone then prepare for disappointment. Keeping an open mind, however, I took a liking to the more technical and proggy aspects of the release, including the few guitar solos and little slam sections in between. 'Rotating Therapy', to me at least, feels more like a Pathology-esque song in the way that the guitar tone and progression follows suit.

'Session 9', though, was my fave track by far in that, despite the shorter length, the variety and creative musicianship really shines through. Horror movie reference aside, there is an abundance of pinch harmonics, heavy shredding, melodic interludes and overall eclectic undertones on this song alone that made it truly stick out. The album finishes off on a rather slammy song that mixes in a lot of vibrant, atmospheric guitar notes and effects, making it my second fave. I didn't really care too much for the middle song, since it didn't do much to stick out. Also, one criticism I have of the album as a whole is the underwhelming lack of slams, as mentioned previously.

I actually mostly enjoyed this release (apart from the few things mentioned before) primarily because of the people involved as well as the showcasing of musical ability and guttural talent. Sure, I was a bit underwhelmed at some points and there were other parts that kinda dragged on a bit. However, this short little EP is just enough to sink your teeth into a more techy, condensed sound for the brutal death genre in order to get some small moments of entertainment  value or Disgorge/Condemned/Pathology nostalgia here and there.