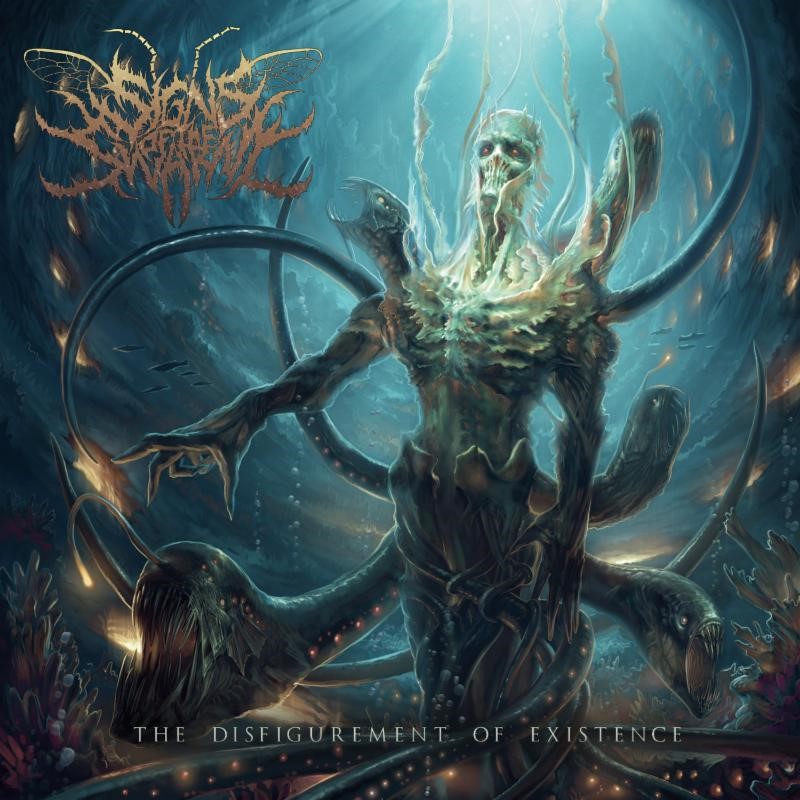 Raffy Reviews - Signs of the Swarm: 'The Disfigurement of Existence'

The Disfigurement of Existence
by Signs of the Swarm

Not too long ago, we've had the most recent release of Signs of the Swarm upon us. Hailing from Pittsburgh, PA, this relatively new slamming deathcore act has unveiled The Disfigurement of Existence. Performing and recording as a five-piece under the Unique Leader Records label, the band has incorporated some updated elements into their latest album. Will it live up to their debut?

The Disfigurement of Existence presents itself as a 47-minute release in length, consisting of ten tracks. This sophomore album is more on the slamming side of deathcore as opposed to their previous, which bordered more on the downtempo aspects. The themes seem to discuss real-life issues such as despair, death, anger and fear of the unknown. Finally, the instrumentals are all there to provide the slams, the breakdowns, bass drops and blast beats among the harsh, guttural vocals.

The album is lengthy, but it rarely ever stops, slows or slacks on being entertainingly heavy. Each track is similar, but still manages to provide its own spin on the overall sound. At times, there'll be a little guitar solo or symphonic section thrown in, which adds a nice touch. The album is even a tad melodic at some points. There is a very innovative track later on about half-way into the release that blends the formula together into an interesting instrumental song. The production quality is pristine, and the guitar tone, as well as some bass, is very audible to say the least. Drumming is consistent, and the general atmosphere is dark, yet draws you in the more you listen. Vocals are much improved, and provide greater variety as opposed to the debut. The best parts of this album are the slamming sections as well as the slight transitions from melody to outright brutal dissonance.

Not very many flaws in this one. One thing in particular that I can even think of is the slight lack of high-pitched vocals, which is more of a nitpick anyway. Other than that, this album is largely without faults.

In conclusion, it is safe to say that this reviewer may have found his deathcore album of the year. Signs of the Swarm have really outdone themselves this time around, and greatly surpassed their previous effort in almost every which way. If you're a slam or deathcore fan, then be sure to definitely give this one a go...and, if you enjoy it, then perhaps pick up a copy for yourself while you're at it.

For Fans Of: Ingested, Vulvodynia, Human Error, the slamming deathcore genre in general

**This album is available now at Indie Merch, Bandcamp, & other retailers!**