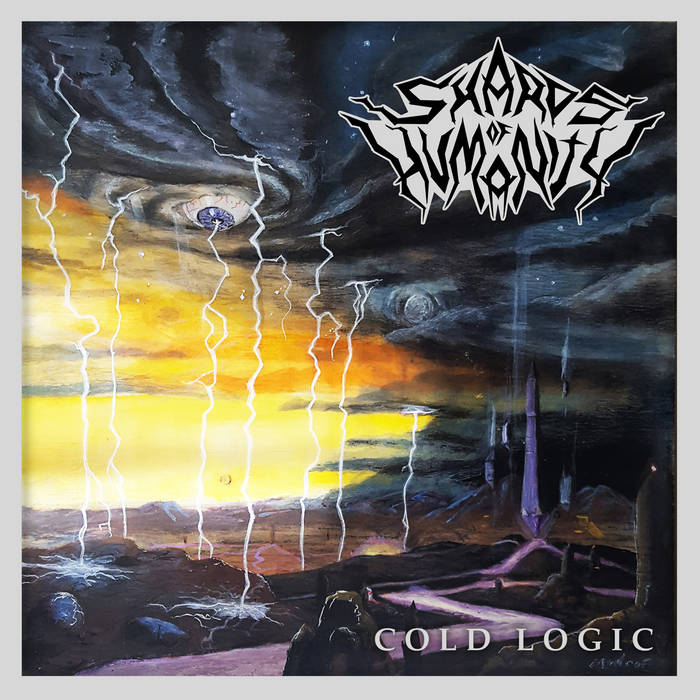 Cold Logic
by Shards of Humanity

Formed in the bowels of Memphis, Tennessee in the late 2000s, these hard-hitting thrashers show off some decent skill and ambitious throwbacks to the oldschool greats of the genre in their latest release titled Cold Logic. The band, which goes by the name of Shards of Humanity (yeah, I expected another brutal death metal band too considering the name and last artist from the same label I reviewed the other day, but I digress), mixes thrash/crossover elements with some death metal undertones here. Unveiled very recently via Unspeakable Axe Records, this brand new ten track sophomore album shows a bit of promise. Let's find out why!

Cold Logic starts off on a vox-less instrumental track with a lot of fast-paced drumming patterns and some sweet tremolo and guitar solo action that you'll actually get to hear a lot of on this album, making it a big plus in my book. The solo style kinda took me back to like Slayer/Kreator era of thrash, while the overall minimal vox, which are mostly there to set off an aura amidst all the instrumental chaos going on, kinda reminded me of stuff like Power Trip in a way along with the writing style. There's also a bit of a techy death metal aspect on the side, especially when it comes to focus tracks like 'Moths of Zeta' and 'Docile Masses', which were both my faves especially because of the spontaneity of the solo reprisals mixed in with the verses as well as the doomy undertones, respectively. A couple of the tracks, like 'I've Seen Death', have a bit more of a grindy-hardcore-esque style whilst there's also a couple of tracks that are purely instrumental.

So all in all, this modest sounding little throwback to the nostalgic thrash metal era with some 90s death influences thrown in here and there serves as a solid reminder of the genre itself still being far from extinct. With an overabundance of guitar solo action throughout, some over-the-top instrumental tracks that'll keep you entertained, and some chaotic, speedy verses with minimalistic vocals, Cold Logic breaks through the mold with a fresh yet oddly familiar sound to boot. Great for both death and crossover thrash metal fanatics and a fine addition to your underground playlist.