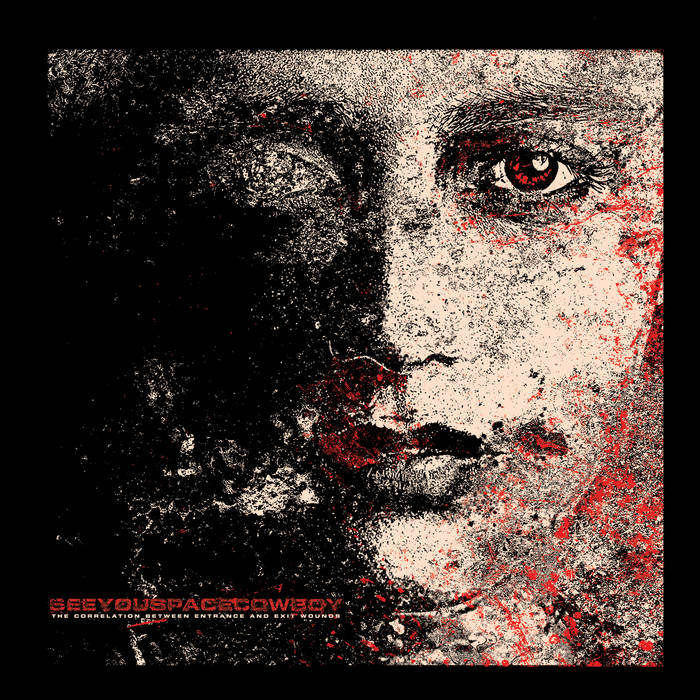 Raffy Reviews - SeeYouSpaceCowboy: 'The Correlation Between Entrance And Exit Wounds'

An interestingly chaotic revamp of oldschool grind and hardcore sounds

The Correlation Between Entrance and Exit Wounds
by SeeYouSpaceCowboy

The more chaotic side and sounds of the metal and core spectrum is one territory that not too many artists would like to explore and experiment with these days, it seems. However, with the insurgence of the likes of communities such as Mathcore Index, which strives to promote bands including Car Bomb, The Callous Daoboys and others like them that embody the 90s ConvergexThe Dillinger Escape Plan vibe, there is a silver lining...and with it came about a rise of crazy/kickass 'out there' bands like the one we're talking about today. SeeYouSpaceCowboy stands as a California quartet that's been around for a couple years now and has taken influence from the aforementioned, plus an anime-inspired name and Oakland hardcore elements to boot.

Essentially all you need to know about the San Diego band's new album The Correlation Between Entrance And Exit Wounds is that it's their full-length debut, with a slightly different, slightly more melodic drawn sound being present as opposed to their previous split/EPs. Another thing to note is that SeeYouSpaceCowboy is now a featured Pure Noise Records artist, so there are some metalcore vibes to be heard, as well. The new release sports eleven tracks of eclectic content and is available now on multiple formats, including physical CD, LP and digital download.

The opening song lays down the really "screamo"-esque (for lack of a better word here) as well as the more slammy, bordering on death metal instrumental elements. Throughout this release there are multiple sections that allude to late 90s chaotic hardcore and 2000s mathcore in addition to the latent metalcore vibes being present, such as the melodic interlude section consisting of acoustic guitars and spoken word in the album's second song, which was one of my faves off of it and reminded me of oldschool The Number Twelve Looks Like You. The riffs go all over the place and sometimes this plays to the disadvantage of there being less structure and meaningful transitioning between parts, though perhaps that's the intended vibe all along. Other times it makes the overall sound more gripping and exciting, such as the galloping breakdown riff that comes in 'Disdain Coupled With A Wide Smile'.

One big aspect of the album I really enjoyed was the inclusion of more ambient and melodic sections that are usually very instrumental (guitar/drum) focused, such as the aforementioned one early on in the release as well as one more that consists of the track 'A Space Marked Escape'. Following this song, a more rhythmic 'deathcore'-ish sound takes shape that kind of reminded me of Into The Moat from back in the day. There was a certain From Autumn To Ashes/Poison The Well/early metalcore feel I got from this song as well with how the melodic riffing goes in relation to the breakdowns and mix of high screams and low growling vocals. Also, the shift into a more soothing sound follows and beautifully drags on until another highlight track comes on in the form of 'Late December'. This one truly has a ton of surprises for oldschool metalcore/mathcore/hardcore fanatics, so I really encourage a listen in this case.

SeeYouSpaceCowboy's debut full-length makes a lot of sound changes, some that interestingly enough stick and others that are questionable, to say the least, in its condensed 20-something minute running time. It's a rather chaotic and experimental revamp of nostalgic sounds associated with grind, mathcore and chaotic hardcore that really does feel like there's an overwhelming sense of destructive creation and so-called eclectic progression thrown in. This type of music is targetted for a more niche kind of audience, so the sound is ultimately hit-or-miss, though if you enjoy the previously mentioned artists herein then you may be in for some type of treat. The band's sound is slowly being altered, now let's see what they can come up with in the near future.

For Fans Of: Arsonists Get All The Girls, Botch, The Number Twelve Looks Like You