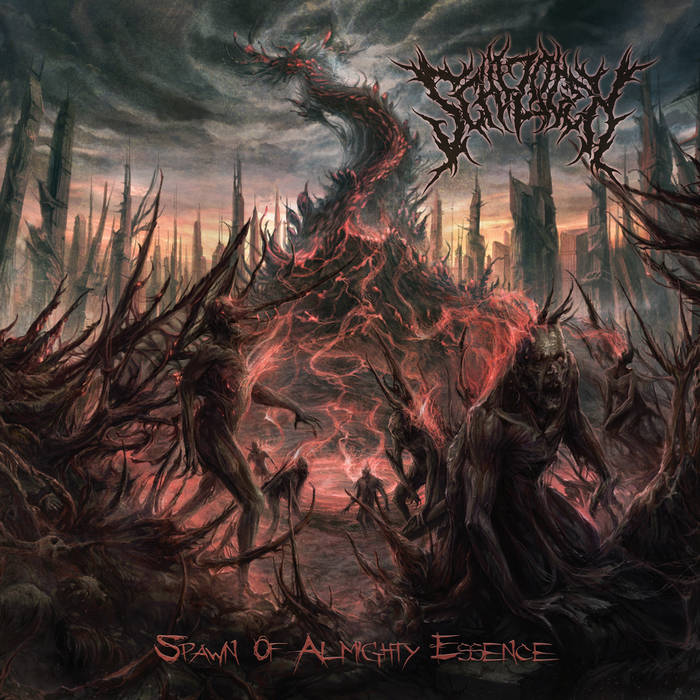 Spawn of Almighty Essence
by Schizogen

The amount of brutal death bands whose formula revolves around the slamming variety has multiplied countlessly and to obscene numbers the world over in the years since the likes of Pathology and others set the stage for its newfound, fleshed out and somewhat techy offerings. Kiev, Ukraine's own outfit known as Schizogen really packs a punch where it counts and mixes things up with their grimy tone, technical melodies, bouncing bass lines, and general slam ambiance. Formed nearly a decade ago as of the writing of this review, the Willowtip Records-signed four piece is now releasing its sophomore full-length album unto us. The new album titled Spawn of Almighty Essence takes on slammy, gory and somewhat misanthropic themes in its eight tracks, offering up nearly forty minutes of death-obsessed content mixed/mastered by TsunTsun Productions and with artwork by Italian death metaller Marco Hasmann, who's collaborated with similarly brutal bands such as Abhorrent Deformity, Dawn of Demise, and even the legendary Epicardiectomy.

The album starts off with some background buildup and ambiance in the vein of a supernova blast going off and some hellish, otherworldly melodics that segway into the first song, which is a mixture of blast beats, fast riffing, some loud bass wacking, tremolo slams, pinch harmonics and all the works. It turns out to be a fairly solid track that showcases all the highlights and best parts to expect for the next half hour or so. The tempo and structure shifts a ton in this release, which reminds me of that distinct Beyond Creation vibe that I get when it goes from high note melodies to fast pace riffing and some slamming brutality in between. The song lengths are on the longer side, with one instrumental track at the end that's a brief couple of minutes and one very lengthy track that throws everything and the kitchen sink in. Usually, I'd be all for this, but it just got repetitive due to that factor, though. I really appreciate all the audible bass lines in the background that have their own feels in juxtaposition to the fast guitars. Similarly, many songs on here have a more melodeath-like instrumental outro as opposed to a slamming breakdown one, which is fairly different as far as this genre goes, but is yet another breath of fresh air in my book.

As far as the songs themselves go, I was very partial towards the album's first half, especially with tracks like 'Galaxies Systematic Infection' and 'Roots of the New Civilization', both of which gave off some real proggy slam vibes and were spontaneous as hell when it came down to the timings of the breakdowns and the destruction of the blast beats and open chugs. There are some conflicting instrumentals that I could take or leave, but, for the most part, a lot of the content on here stuck with me in a good way and felt truly remarkable from a musician's (specifically death metal musician's) point of view. There is enough innovation to go around from start to finish and I really enjoyed the full on slam assault of 'The Genes Recording' as well as the breakdowns and melodies in other tracks like 'Biological Damage Processes', all of which tell a story of their own in the midst of some vile, hectic, otherworldly themes being spoken through unintelligible vocals. For the willingness to make so many distinct influences and elements come together into one consistent album and stick so well, I commend Spawn of Almighty Essence.

The best way to put it briefly for this release (and to top off this review) is that Schizogen's latest release ultimately takes some risks here and there and manages to explore other tenets and subgenres of the death metal pidgeonhole whilst confidently sticking to its slammy, fast paced roots for the duration of its composition. Spawn of Almighty Essence may honestly be just one of the more spontaneous albums I've heard within the slam realm mainly because of its shifting and unpredictable song structures as well as instrumental phases throughout. There are parts that sound slightly soothing and melodically break away from the overall lightning paced chromatic and tremolo riffs; while others take on a sort of Suffocation/Condemned atmosphere with hints of the old slamcore randomness thrown in to boot. It's an album I'd recommend for those slam and brutal death heads who're looking for something new and more diverse from a musical and instrumental standpoint that still continues the guttural squeal vox signature tradition. It's seriously piqued my interest, to say the least...and is a strong contender for brutal death release of the year thus far, in my opinion.

For Fans Of: Abdicate, Organectomy, Pathology

**This release is available now on Bandcamp here as well as through the Willowtip Records site here!**