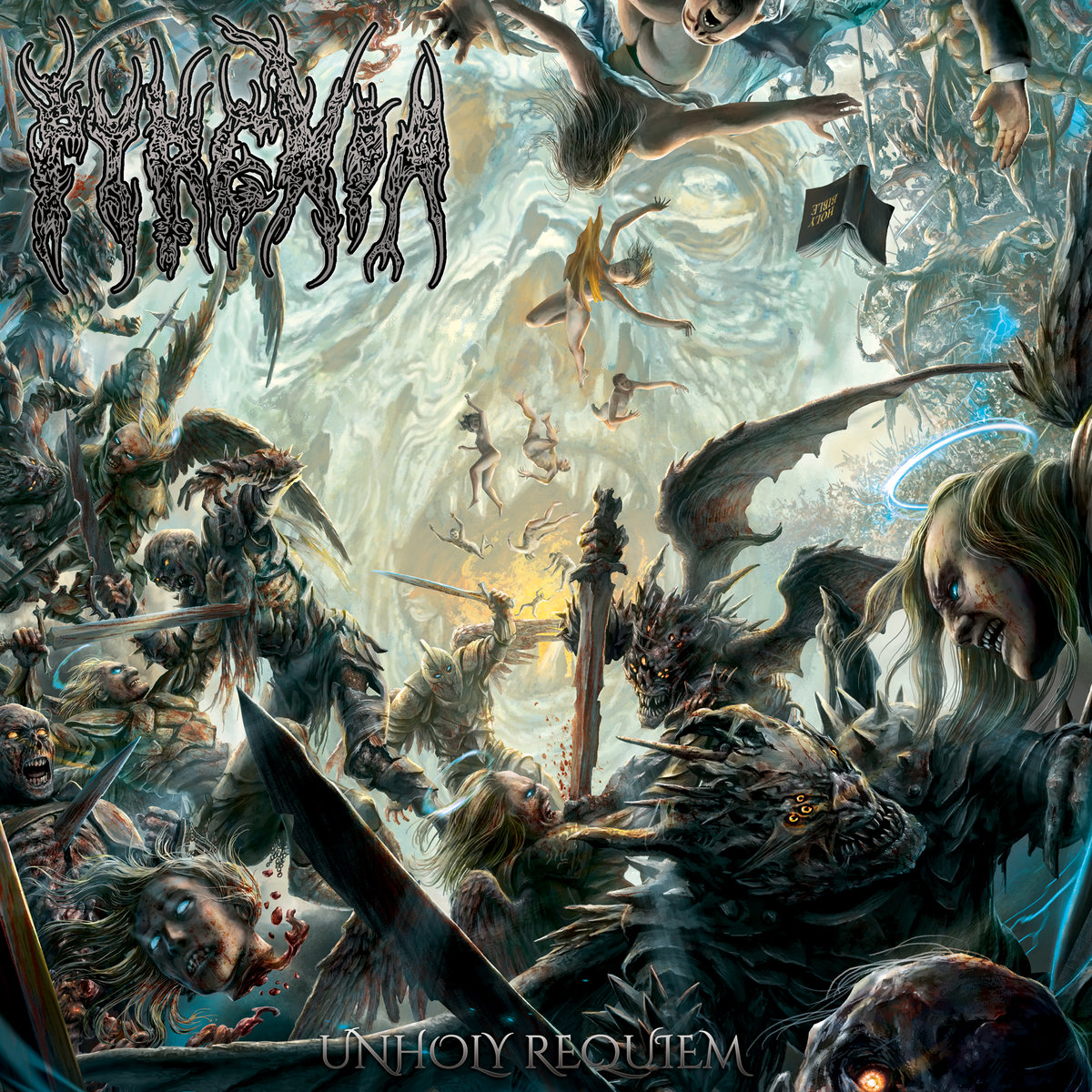 The early 1990s gave way to several big names within the extreme metal world that would eventually gain recognition for spawning and pioneering the subgenre of brutal death. These included the greats such as Suffocation, Repudilation, Internal Bleeding, Devourment, and today's band, which is the main focus of this review. Pyrexia had humble beginnings in 1990 New York City and released a total of five albums under the name (with one other full length being released while the band was performing/recording under a different name). And, after five years of waiting following their last album Feast of Iniquity, Pyrexia has now returned yet again with their fifth full length release.

Unholy Requiem is the new album from the east coast brutal death metallers. This record was unveiled just a couple of weeks ago through the band's current label Unique Leader Records. Despite being a shorter release at just about 25 minutes of content, this eight song composition pulls out all the stops and is surprising in more ways than one. Long story short, Unholy Requiem consists of the five-piece (with Jim Beach on vocals now) and includes layout by Frank Hayes, who has worked with Deeds of Flesh not too long ago, as well as cover art by Ukrainian artist Daemorph. Without further ado, let's get right into it.

The album begins with some buzz roll drumming accompanied by heavily distorted chromatic slam riffs and tremolo picking in the form of 'Unholy Requiem' (Track 1). This formula goes on for much the duration of the song's three minutes running time, so for starters it's pretty straightforward brutal death. Then about halfway in we get some catchy melodic riffage and guitar solo action to top everything off. What I've noticed about Unholy Requiem as a whole is that, while it's centered around fairly standard brutal death formulas, it does go off on tangents during certain points that attempt to build upon the overall sound and slightly innovate, such as the melodic riffs and different drumming patterns for instance. The second track, 'Angels of Gomorrah', is more of a fast paced song laced with gutturals, slamming riffs and that signature guitar solo at the end. Another thing I've noticed as a running theme on this album is Pyrexia's frequent use of guitar solos to close off songs. And, while it's amusing the first few times, it gets pretty old after a while since many of the solos sound similar.

I will also say, though, that I really enjoy the vocals on Unholy Requiem and that the album, both technically and performance-wise overall, is a step up from the previous effort. Some of the more worthwhile songs to check out on here are the aforementioned 'Angels of Gomorrah' for its old school sound, 'Wrath' for its relentless slammy nature, and 'Path of Disdain' due to its structure and headbang-worthy main riff. 'Blood to Ash', while the release's shortest song, also happens to be arguably my personal fave because of how over-the-top slammy it is. 'The Annointed' is one track that I particularly didn't care for...it just seemed to all over the place for my liking...and 'Moment of Violence', while a decent closing song, isn't one of my faves here. All in all, the album mixes elements of old school death metal with more modern brutal death, technical and slamming riffage throughout, and the production quality really helps bring everything out and together. The album's short running time, though, was another thing I thought set it back a bit.

At the end of the day, despite Unholy Requiem's flaws here and there, I still found the album to be an alright comeback from the band's last release and a decent runner for this year's brutal death metal releases. While it's not necessarily a great album (or even one of my fave brutal death albums from this year), Unholy Requiem still possesses some of those qualities that Pyrexia has become notable for in the past as well as some sections that are praiseworthy. And, with a bit more polishing and content, I believe the guys over at Pyrexia could dominate their niche once again.

Cons: Short length, overuse of guitar solos, a couple of songs that don't hold up

**This release is available now on IndieMerchStore.com here (when in stock) and on Amazon here!**