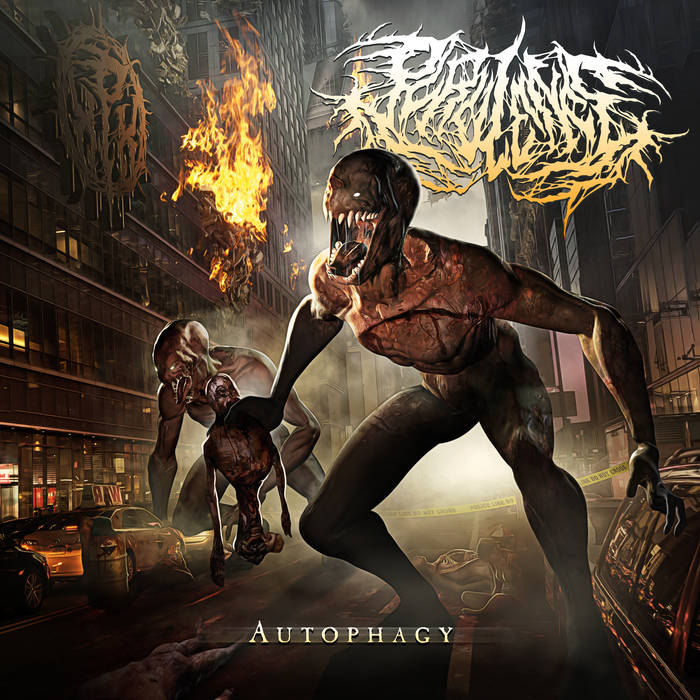 One brutal UK outfit coming straight out of Wigan; one heavy slamming deathgrind release to spite them all. Purulence arose as one of those tongue-in-cheek kinda jokey extreme metal bands that didn't really take themselves too seriously at the start. However, as their underground career progressed, they garnered a rather modest fanbase within their scene and went on to make a few full-lengths that sported the traditional slam/brutal death elements of really out-there and gory artwork combined with toilet vocals and punchy instrumentals. And now, they're back at it again with their latest album titled Autophagy: a 40 something minute, eleven track composition that truly tests the limits of the genre as well as the technical abilities of the artists themselves. It's a mostly DIY and independently released effort with a couple of unexpected guest spots as well as some pretty damn cool cover art that reminds me of Abominable Putridity-level stuff. So let's dive right in and have at it!

The start of this release reminds me a lot of the start of many a blackened death/kvlt black metal bands with how the tremolo strumming chords take flight amongst the backbone of a somewhat low-fi ambiance. Then, the music stops but resurfaces once again in a more blast beat-friendly slamming death aura, packed with mostly pig squeal type vocals (with some high shrieks akin to more grindey stuff like Circle of Dead Children, for instance). The pig squeals remind me a lot of older Kraanium except  more low-pitched, and the choppy trash can snare takes me back to the nostalgic sounds that come with Waking The Cadaver's debut release.

There's a lot more of the aforementioned that takes hold. The guitar tone cleanly fades in and out and leads into song two: 'Ripped Apart', which I liked for the most part except that it didn't really grab my interest as much as some of the later songs save for the slammy and groovy second half that kinda sounds like Devour The Unborn & co. with how it flows. 'Cognitive Dissonance' is an okay song on its own but the squeals feel sort of overpowering and too goregrind-ey. This is especially highlighted by the inclusion of Crepitation's Sam Taylor. The over-the-top brutality is definitely there and cranked up to eleven, but it just kinda felt like it did too much of that at the expense of structure and innovation. 'Cranial Explosions' was more my style with how the melodic intro leads into the blast beats/slams and tops off with melodics towards the end, once again. 'Unfound' is a track that does this a bit too, though I'm not sure how the gimmicky first half of the song stacks up to the rest.

As far as the rest of this release goes, 'Flayed By Solar Winds' is perhaps my personal fave because of its 90s brutal death vibes as well as the Malodorous guest spot, which stole the show in my opinion so to speak. 'Meth-Induced Facial Excision' is another decent song with a very comical name and 'The Septiconaut' does anything but in terms of the musical flow and musicianship itself...as the song goes hard as ever right before the album finishes. The rest of the tracks I haven't mentioned or discussed kinda just blend in, drag on or are fillers like 'Grinding To A Halt', which is just a buildup to the outro song, which is eight minutes in length and seals the deal.

Autophagy ultimately, to me at least, ends up being a very face-melting, brutal escapade by the UK collective with an ominous atmosphere, campy brutal death undertones, and hard hitting slam riffs throughout. The subgenre itself is heavily oversatured these days. However, Purulence manages to somewhat mix it up with their own sense of ambiance and technical elements playing-wise in order to stand out from the 1000s other projects that stand in their wake. They're a hard recommend for those who are into the more 'out-there', disgustingly brutal and somewhat high production slam side of death metal, with a touch of eclectic vibes here and there. Overall, I feel like this is one I may come back to quite a bit in the future.

For Fans Of: Disentomb, Parasitic Ejaculation, pretty much any other slam band, ever