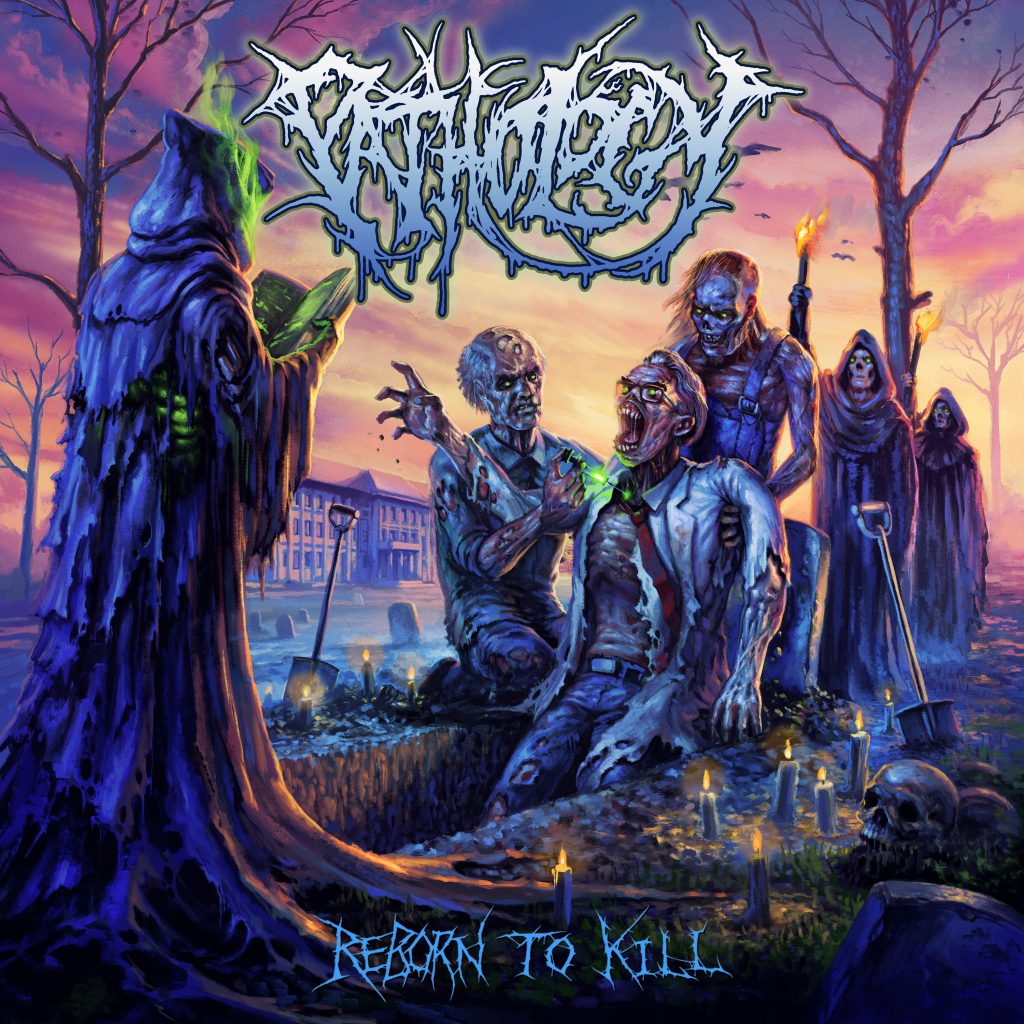 Reborn To Kill
by Pathology

Pathology arose in the mid-to-late 2000s to prominence as one of San Diego, CA's most technically well-versed and structurally sound brutal death bands (with toilet vocals, no less). Oddly enough, these longtime slammers went through countless line-up changes, especially within their vocal department, which featured both Matti Way (Abominable Putridity) in addition to Jonathan Huber (I Declare War) at certain points of the band's career. Through the years, a grand total of ten full-length records came to fruition and the dudes recently started touring again.

And now, with all that being said, we present to you their latest (and, perhaps...greatest?) release that was unveiled earlier this month of August, 2019 via Pavement Entertainment. Standing boldly and tall as a phenomenally produced 33 minute album, Reborn To Kill aggressively tackles every obstacle and ups the ante on many of the band's fronts that've been seemingly dried up and overused along the way in order to create a dozen tracks of both old and newer sounds for Pathology. Also featuring guest vocals courtesy of The Black Dahlia Murder's Trevor Strnad, who I swear I see included as a guest spot on every other death metal project's release these days; as well as artwork done by none other than the great Par Olofsson, who I'm sure needs little to no introduction for many of you readers who've been following the scene...and finally Zack Ohren as producer, who's worked with countless other notable bands in the scene such as All Shall Perish & Molotov Solution.

Album itself begins rather swimmingly with some of the usual slammy goodness and toilet vocal madness courtesy of Pathology. The music eventually goes from straightforward slamming brutal death to a more melodic sort of techy death though with how the riffs transition from tremolos and chromatic slides that are a staple of the genre to a more atmospheric type of sound. These aliencore/Condemned inspired sections and guitar solos alike serve to give off some added ambiance as well as variety to the overall mix. Some parts, especially in songs like 'Forced Regression' and 'Frothing at the Mouth', give off a feel comparable to this year's earlier hit title given to us by Organectomy. The melodic guitar solo breaks juxtapose occasionally with the onslaught of gutturals being shoved in our ears and the intermission track of 'Empathy Ends' was one that I did not see coming, so hats off to them for that as well...bonus points for surprising me and trying something different.

All in all, while a lot of the stuff on here represents the same ole brutal death band (with techy vibes) that we're used to at this point, there are some newer elements being drawn in, particularly in the album's second half. Also, the slams are used sparingly to give way to more intricate riff patterns and guitar solos. The blast beats are still plentiful as are all the other slammy death influences we enjoy, but the strive for innovation and a more technical/sometimes melodic feel is definitely noticeable. The album similarly ends on a more melodic track, as well.

For Fans Of: Abominable Putridity, Katalepsy