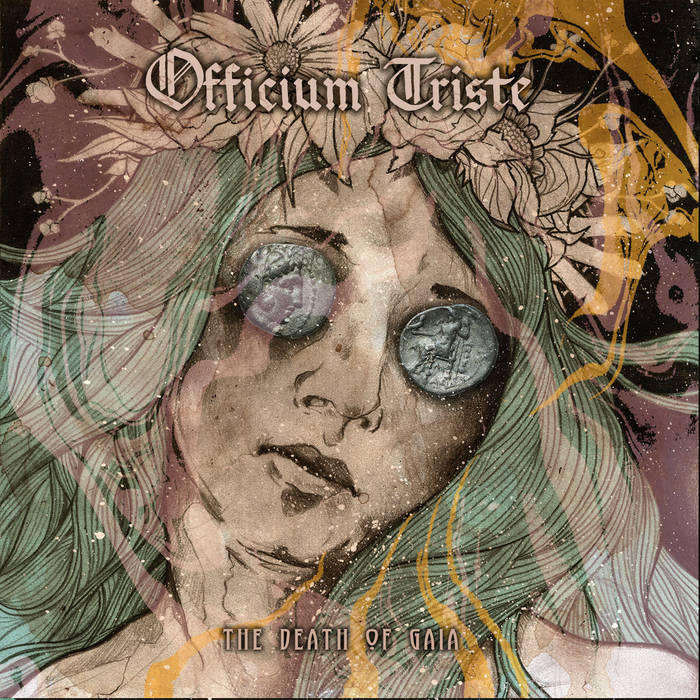 Clashing riffs and melodies mixed with dark, low vocals and a steady pace make for an interesting death-doom venture

The Death of Gaia
by Officium Triste

Netherland's Officium Triste stands as somewhat of a surprisingly unconventional outfit in today's death metal arena. With their longwinded compositions comprised of abundant atmospheric energy, low pitched vocals, high strung melodies and doomy song structure, it is little wonder that this Rotterdam-based six piece band has gained so much traction in the decades since their mid 1990s inception as a studio project. A longstanding career and discography under their belt, they've now unveiled their latest (and perhaps greatest?) offering to the world: the band's sixth full-length album to date in the form of...The Death of Gaia. Now, for those unaware, Gaia is a titan goddess in Greek mythology that essentially represents the earth, and Officium Triste's magical harmonies and contrasting dissonance attempt to symbolize and tell the story of the many sides of not only nature, but humans themselves. We've got eight songs, culminating into nearly an hour of content (released via Transcending Obscurity Records) to discuss and dissect here, so let's not waste anymore time with the minor details, shall we.

This journey through multiple varying degrees of sound starts off with a fairly run-of-the-mill introduction consisting of some rather uneventful, yet soothing melodies and background noise that builds up and leads into the actual start of the first song, which isn't particularly my fave, but it gets thd job in setting the mood for the rest of this release done well. With its bashful melodies highlighted over a contrastingly dark instrumental riff salad and some equally foreboding vocals in the mix, it drowns out a lot of the doubts I had about this one from the start, though I think a continuation of the guitar solo later on could've done it more justice, too. And then, we come to the second song (and one of my faves off the album): 'World in Flames'. This composition really got it right for me in several regards; from the slow moving progression to the blackened death riffs and the intro piano lines as well as the overarching music video, it gets so much right. On the other hand, 'Shackles' is a drawn out but hefty song that combines some Black Tongue vocal patterns with more uplifting guitar high notes and power chords along with a The Contortionist-esque middle portion consisting of some orgasmic core melodies and transitions that culminate into more blackened destruction. It's a slow moving song with more emphasis on the vocals, but it still stuck with me for the addicting melodies.

Next up, a somewhat brief for the album filler/instrumental track in the form of 'A House in a Field in the Eye of the Storm' (now that's a mouthful ain't it) takes shape and goes on with an orchestral and ambient vibe. What sets this one apart is that, unlike most of the rest of The Death of Gaia, this song doesn't really last long or bring too much to the table at this point. It feels like an instrumental recital of a previous portion of a song we already heard. However, several of the other songs, especially the outro song as well as 'The Guilt', yet another very formidable ensemble, manage to do a lot more with how the initial ambiance towards the album's opening set the mood. With the orchestral aura of strings and the percussive backdrops, to the memorably daunting choir-like vocals, these tracks in the second half of The Death of Gaia truly represent a successful blend of oldschool doom metal with melodeath and subtle hints of symphonic and blackened traits, as well.

Finally, with all that being said and done, there are a couple of little qualms I have with this release. Aside from the little filler stuff mentioned before, I thought certain aspects on display here could've been utilized more or to better advantage, like the little guitar solos or clean singing earlier in the album that I thought added a nice touch. Overall, though, the band did a bang-up job with putting everything together into a destructively melodic and longwinded project that had me at the edge of my seat from start to finish, especially within the album's second half (i.e. latter four tracks), which are pretty much phenomenal in my eyes and to my ears. This will be a hard act to follow, I must add as well.

There's much more that can be said about this release. But, to put it lightly and in possibly the most brief way possible, Officium Triste's newest album really is an eventful and at the same time, relaxing and sometimes distressing journey into the earthly struggles and inherent pessimism of mankind. The lyrical and musical content on The Death of Gaia shook and surprised the living daylights out of me in quite literally the most superb manner conceivable through its clashing riffs and melodies, dark and low pitched growling vocals, occasional shifts in tempo and tone, unconventional doomy song progressions, choir-like undertones, steady pace, mixed atmosphere and the like. There's just so much to enjoy about this album in general that I wouldn't be surprised if I were to feature it in multiple end-of-year lists for metal. I'd highly recommend this one to fans of gloomy ambiance, blackened riffs, doom substances in between, death metal vox, stuff like November's Doom as well as oldschool Agalloch if you remember them, etc. Seriously, if you like metal music to any extent, give this one a go for your own sake.

Fave Tracks: 'World in Flames', 'The Guilt', 'Like a Flower in the Desert'

For Fans Of: Agalloch, Burial in the Sky, My Dying Bride, Summoning