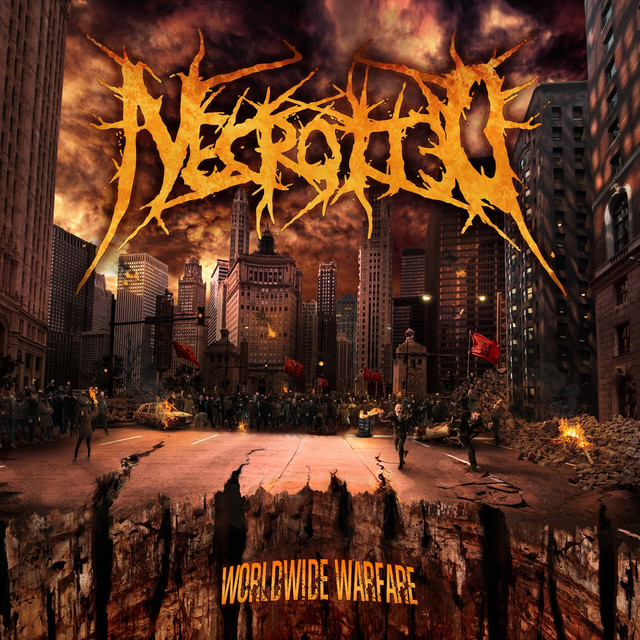 Background/The Band: Germany is a country that is pretty well recognized for its underground music scene—especially when it comes to heavy metal. In the past several years, countless bands have taken the forefront in spreading their so-called brutality. Necrotted, a brutal technical death metal six-piece project that hails from Abstgmund, South Germany, happens to be one of these acts. Playing and recording under the Rising Nemesis Records label for roughly a decade now, Necrotted satisfies its fans by combining elements of technical bdm and slam, culminating into a fast-paced and heavy environment for its listeners.

Album Breakdown: Their latest release, titled Worldwide Warfare, is yet another addition to their brutal discography. The album clocks in at about 37 minutes and consists of ten pulse-poundingly heavy tracks. Worldwide Warfare doesn't let up...and it gets straight to the point as soon as it starts. From the cover art to the music itself as well as the themes, this release is a treat for brutal death fans all over, especially for the little quirks that are added in here and there.

Pros: The album throws as much as it can in your face...from the fast-paced double bass and blast beat drumming, to the frequent guitar solos, chugging breakdowns and slam sections, and even the surprising inclusion of not just one, but two vocalists in the mix. There are some softer, dramatic parts in between the brutality that are there to add a sense of atmosphere at times; however, for much of its running time, Worldwide Warfare will strive to be loud, proud and an abliteration of your hearing senses, which is a good thing on our end. The two vocalists are fairly distinguishable for the most part, and the guitar riffs and solos run rampant throughout as well. The production quality on here is a tad better than a lot of other low-end bdm releases, which is another plus.

Cons: Sometimes, Necrotted rely on recycling certain riffs and parts from previous tracks in other songs (although it doesn't happen as often as in many other slam or brutal death acts). Also, the instruments kind of drown each other out at certain points and the overall wall of sound comes out a bit cluttered and unrecognizable.

The Verdict: Necrotted's new release is slightly better than your average brutal death metal composition. This notion is mostly aided by the high-end production, technical riffs and performances, the addition of double vocals, and a few other little things here and there that help the album develop its own character. It's a recommended listen for those who enjoy listening to something brutal and technical at the same time...and of course, those who were fans of the band's previous works. While there's not much more one can say about this album, Worldwide Warfare pretty much speaks for itself.