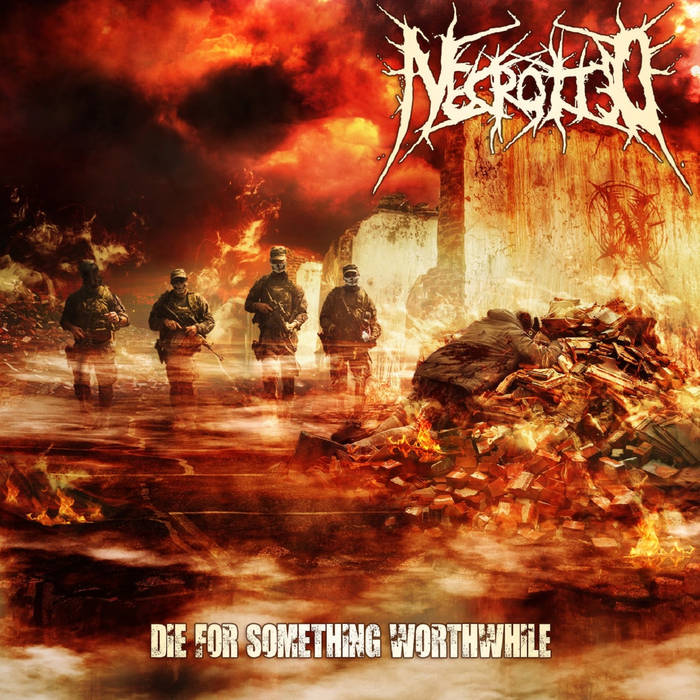 A mixed bag EP that's very short, but compensates heavily on its variety of sounds and high quality

Die For Something Worthwhile
by Necrotted

Here today we have another stellar offering courtesy of Germany's very own brutal death (complete with techy parts, slammy riffs and everything but the kitchen sink in between) metal band Necrotted. And the focus is, once again, on the concept of warfare, death and how those themes relate to their abhorrent, yet addicting music. Needless to say the Rising Nemesis Records six-piece act, who's been at it for over a decade now, is back with a brand new release in the form of their second EP to date, being a follow-up to their third album Worldwide Warfare. It's basically just about 13 minutes/four tracks of brutal, techy, sometimes melodic and, once in a blue moon, core influenced death metal...and the time to talk about it is now, so buckle up!

The self-titled track starts off this EP on an unsurprisingly very fast note, given as to how the previous album flows. The meaty slams and 'pingy' snares and double bass kick in without hesitation, giving way to the first verse, which is essential a mixture of low gutturals and high pitched shrieks akin to stuff like Despised Icon...or, you know, just like Worldwide Warfare on account of there being two vocalists. A bit after the intro verse, a chromatic slam riff with a melodic sort of high note twist opens up the song to a pretty memorable and chill chorus before going into a tremolo-like frenzy, a slamming breakdown and finally a sorta blackened outro with ambiance. And this all happens within the first three minute song!

Anyway, you should get used to the somewhat haphazard blending of different elements, because it happens a lot in this EP and, quite frankly, it mostly sticks for me at least. The production quality is also on par with the previous full-lengths, which surprised me a bit, too. The guitar tone is slightly different here, but works to an advantage as well. The following track 'Eudaimonia' has kind of a deathcore vibe akin to MySpace era bands like Animosity. However, it's not to say that there is definitely a techy death metal overtone throughout that really shines through the riffs in between the chugging breakdowns. 'Six Feet Deep, No Party Too Steep' ultimately became my fave track because of its lightning pace, catchy hook riffs and lategame guitar solo...a nice touch I might add. The outro song is pretty varied, too. Overall, though, I'd say I liked nearly everything about this one, just wished it was longer in length and had more guitar solo action maybe.

Necrotted really managed to strike a nerve with me on this one in particular, and in the best of ways. The new EP comes off as a deliciously delectable and equally as brutal mixed bag of different elements, high quality and varied sounds in the vein of deathcore breakdowns, occasional slamming sections, a pretty sick guitar solo, lightning blast beats and double bass, some melodic and techy heaviness, double vocal variety and the whole package in just such a short running time. It caught my attention and really gave me a ton of added hope for what's to come in the band's very near future. I'd recommend this one to fans of the last full-length as well as newcomers who are into all the things mentioned prior. So have fun with it and enjoy this little release.

For Fans Of: Mental Cruelty, Pathology